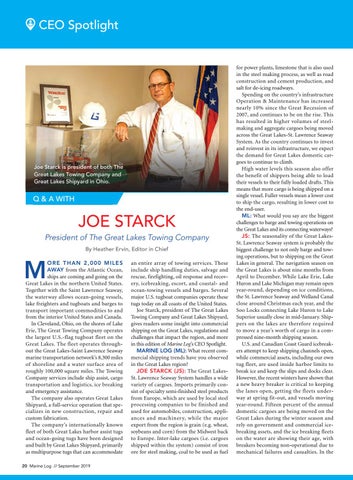 Joe Starck is president of both The Great Lakes Towing Company and Great Lakes Shipyard in Ohio.

ore than 2,000 miles away from the Atlantic Ocean, ships are coming and going on the Great Lakes in the northern United States. Together with the Saint Lawrence Seaway, the waterway allows ocean-going vessels, lake freighters and tugboats and barges to transport important commodities to and from the interior United States and Canada. In Cleveland, Ohio, on the shores of Lake Erie, The Great Towing Company operates the largest U.S.-flag tugboat fleet on the Great Lakes. The fleet operates throughout the Great Lakes-Saint Lawrence Seaway marine transportation network’s 8,300 miles of shoreline and a water surface area of roughly 100,000 square miles. The Towing Company services include ship assist, cargo transportation and logistics, ice breaking and emergency assistance. The company also operates Great Lakes Shipyard, a full-service operation that specializes in new construction, repair and custom fabrication. The company’s internationally known fleet of both Great Lakes harbor assist tugs and ocean-going tugs have been designed and built by Great Lakes Shipyard, primarily as multipurpose tugs that can accommodate

an entire array of towing services. These include ship handling duties, salvage and rescue, firefighting, oil response and recovery, icebreaking, escort, and coastal- and ocean-towing vessels and barges. Several major U.S. tugboat companies operate these tugs today on all coasts of the United States. Joe Starck, president of The Great Lakes Towing Company and Great Lakes Shipyard, gives readers some insight into commercial shipping on the Great Lakes, regulations and challenges that impact the region, and more in this edition of Marine Log’s CEO Spotlight. Marine Log (ML): What recent commercial shipping trends have you observed in the Great Lakes region? JOE STARCK (JS): The Great LakesSt. Lawrence Seaway System handles a wide variety of cargoes. Imports primarily consist of specialty semi-finished steel products from Europe, which are used by local steel processing companies to be finished and used for automobiles, construction, appliances and machinery, while the major export from the region is grain (e.g. wheat, soybeans and corn) from the Midwest back to Europe. Inter-lake cargoes (i.e. cargoes shipped within the system) consist of iron ore for steel making, coal to be used as fuel

for power plants, limestone that is also used in the steel making process, as well as road construction and cement production, and salt for de-icing roadways. Spending on the country’s infrastructure Operation &amp; Maintenance has increased nearly 10% since the Great Recession of 2007, and continues to be on the rise. This has resulted in higher volumes of steelmaking and aggregate cargoes being moved across the Great Lakes-St. Lawrence Seaway System. As the country continues to invest and reinvest in its infrastructure, we expect the demand for Great Lakes domestic cargoes to continue to climb. High water levels this season also offer the benefit of shippers being able to load their vessels to their fully loaded drafts. This means that more cargo is being shipped on a single vessel. Fuller vessels mean a lower cost to ship the cargo, resulting in lower cost to the end-user. ML: What would you say are the biggest challenges to barge and towing operations on the Great Lakes and its connecting waterways? JS: The seasonality of the Great LakesSt. Lawrence Seaway system is probably the biggest challenge to not only barge and towing operations, but to shipping on the Great Lakes in general. The navigation season on the Great Lakes is about nine months from April to December. While Lake Erie, Lake Huron and Lake Michigan may remain open year-round, depending on ice conditions, the St. Lawrence Seaway and Welland Canal close around Christmas each year, and the Soo Locks connecting Lake Huron to Lake Superior usually close in mid-January. Shippers on the lakes are therefore required to move a year’s worth of cargo in a compressed nine-month shipping season. U.S. and Canadian Coast Guard icebreakers attempt to keep shipping channels open, while commercial assets, including our own tug fleet, are used inside harbor limits to break ice and keep the slips and docks clear. However, the recent winters have shown that a new heavy breaker is critical to keeping the lanes open, getting the fleets underway at spring fit-out, and vessels moving year-round. Fifteen percent of the annual domestic cargoes are being moved on the Great Lakes during the winter season and rely on government and commercial icebreaking assets, and the ice breaking fleets on the water are showing their age, with breakers becoming non-operational due to mechanical failures and casualties. In the 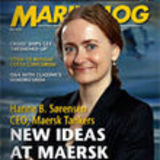