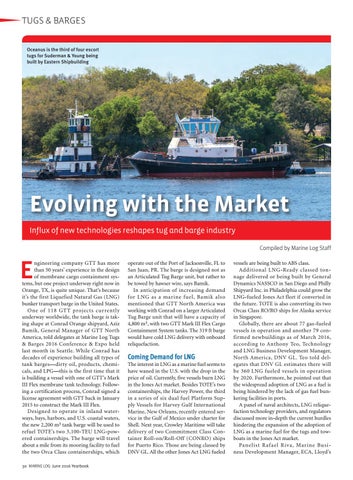 ngineering company GTT has more than 50 years’ experience in the design of membrane cargo containment systems, but one project underway right now in Orange, TX, is quite unique. That’s because it’s the first Liquefied Natural Gas (LNG) bunker transport barge in the United States. One of 118 GTT projects currently underway worldwide, the tank barge is taking shape at Conrad Orange shipyard, Aziz Bamik, General Manager of GTT North America, told delegates at Marine Log Tugs & Barges 2016 Conference & Expo held last month in Seattle. While Conrad has decades of experience building all types of tank barges—dirty oil, products, chemicals, and LPG—this is the first time that it is building a vessel with one of GTT’s Mark III Flex membrane tank technology. Following a certification process, Conrad signed a license agreement with GTT back in January 2015 to construct the Mark III Flex. Designed to operate in inland waterways, bays, harbors, and U.S. coastal waters, the new 2,200 m3 tank barge will be used to refuel TOTE’s two 3,100-TEU LNG-powered containerships. The barge will travel about a mile from its mooring facility to fuel the two Orca Class containerships, which 30 MARINE LOG June 2016 Yearbook

operate out of the Port of Jacksonville, FL to San Juan, PR. The barge is designed not as an Articulated Tug Barge unit, but rather to be towed by hawser wire, says Bamik. In anticipation of increasing demand for LNG as a marine fuel, Bamik also mentioned that GTT North America was working with Conrad on a larger Articulated Tug Barge unit that will have a capacity of 4,800 m3, with two GTT Mark III Flex Cargo Containment System tanks. The 319 ft barge would have cold LNG delivery with onboard reliquefaction.

Coming Demand for LNG The interest in LNG as a marine fuel seems to have waned in the U.S. with the drop in the price of oil. Currently, five vessels burn LNG in the Jones Act market. Besides TOTE’s two containerships, the Harvey Power, the third in a series of six dual fuel Platform Supply Vessels for Harvey Gulf International Marine, New Orleans, recently entered service in the Gulf of Mexico under charter for Shell. Next year, Crowley Maritime will take delivery of two Commitment Class Container Roll-on/Roll-Off (CONRO) ships for Puerto Rico. Those are being classed by DNV GL. All the other Jones Act LNG fueled

vessels are being built to ABS class. Additional LNG-Ready classed tonnage delivered or being built by General Dynamics NASSCO in San Diego and Philly Shipyard Inc. in Philadelphia could grow the LNG-fueled Jones Act fleet if converted in the future. TOTE is also converting its two Orcas Class RO/RO ships for Alaska service in Singapore. Globally, there are about 77 gas-fueled vessels in operation and another 79 confirmed newbuildings as of March 2016, according to Anthony Teo, Technology and LNG Business Development Manager, North America, DNV GL. Teo told delegates that DNV GL estimates there will be 360 LNG fueled vessels in operation by 2020. Furthermore, he pointed out that the widespread adoption of LNG as a fuel is being hindered by the lack of gas fuel bunkering facilities in ports. A panel of naval architects, LNG reliquefaction technology providers, and regulators discussed more in-depth the current hurdles hindering the expansion of the adoption of LNG as a marine fuel for the tugs and towboats in the Jones Act market. Panelist Rafael Riva, Mar ine Business Development Manager, ECA, Lloyd’s