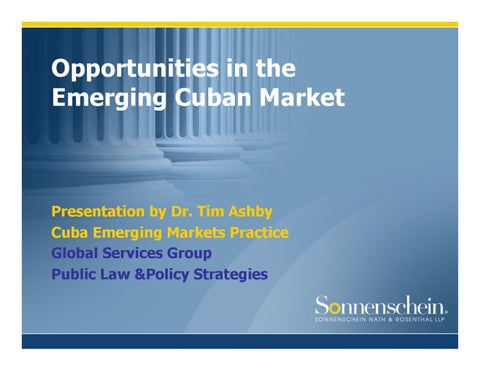 Opportunities in the Emerging Cuban Market

Once the embargo is ended, Cuba’s business potential is unlimited. Projections are 50 flights per day from South Florida alone, practically all cruise ships based in the Eastern half of the US will visit the Island, as many as 7 million U.S. visitors per year, annual trade in the 5-6 billion dollar range, & a real estate development boom. This boom will be the result of the construction of new hotels; 250,000 new housing units to be used by Americans as second or retirement homes; office & commercial facilities, at least 1 million housing units to satisfy Cubans’ needs & the infrastructure to accommodate the residential and business expansion. Soon – with due respect for Cuba’s sovereignty - the U.S. will be able to be a partner in the island’s economic development.

U.S. companies exported $528M worth of food and agricultural products to Cuba in 2009

Cuba will be the Number One Caribbean destination within 5 years

“Cuba has tremendous advantages long-term; not least an educated and literate population of 11 million people, firstworld health indicators, a vibrant cultural, sporting and historical heritage, and an advantageous geographical location where ultimately it could act as a bridge between the US and Central/Latin America. “In the future it is possible that in addition to tourism, Cuba could develop a significant regional role in telecommunications, banking and finance, and aviation, as well as significant interests in oil, mining, pharmaceuticals and light industry.”

•  In 1997, Cuba’s National Assembly enacted Law Number 77 - “The Foreign Investment Act.” •  To complement Law 77, the Ministry of Foreign Investment and Economic Collaboration (now the Ministry of Foreign Trade & Investment) was formed. •  Intended to be augmented with further legislation on banking, real estate and duty free zones. Law 77 not only guarantees transferability of profits to foreign countries, but also no expropriation without compensation, the right to transfer ownership to other foreign investors, & protection against claims of third parties under Cuban law. •  Three forms of foreign investment are allowed: (1) international association contracts, (2) joint ventures, & (3) totally foreign-owned companies. For JVs, no limitation of foreign ownership (may reach 100%). This can be accomplished by either establishing a subsidiary of a foreign company in Cuba or creating a separate Cuban company to operate the business.

•  Law 77 requires a process of negotiation & approval before foreign investment is authorized. Investments of more than US$10 million, 100% foreign ownership, those involving a foreign country, those using natural resources, or that convey either government-owned property or projects involved in certain special sectors, such as: transportation & communication, require the approval of the Council of Ministers’ Executive Committee. All other investments are approved by a Commission created for that purpose by the Council of Ministers. •  Cuba has signed bilateral agreements (BITS) for the protection of foreign investment with more than 40 countries. These provide mutual equal treatment for foreign investment, facilitate repatriation of profits and establish procedures for arbitration of disputes. Cuba had signed 12 tax agreements for the principal purpose of avoiding double taxation.

•  Law 77 authorizes the establishment of duty-free zones & industrial parks open to investment by foreigners. •  Law 165 of 1996 was enacted to implement free trade zones & industrial parks regulations under more flexible investment and operational rules. Three free trade zones and several industrial parks have been created since Law 165 went into effect. The success of these special areas, however, has been quite limited and will remain so until such time as trade with the US is reestablished because there isn’t much manufacturing, assembly or storage business under present circumstances. •  Law 77 provides that foreigners may acquire ownership & other property rights over Cuban real estate. The areas of investment are limited to: real estate development in the tourism sector, housing or offices of foreign companies established in Cuba and residences & other housing structures dedicated to private residences or private tourism activities for individuals who do not permanently reside on the Island.

•  49/49 Rule: According to guidelines from the US Treasury Department’s Office of Foreign Assets Control (OFAC), persons subject to U.S. jurisdiction may invest as minority non-controlling shareholders in foreign companies doing business in Cuba, provided that such companies do more than 50% of their overall business outside of the Island. •  For example, the convenience store chain OXXO, which has four shops in Havana, is owned by Mexican corporate giant FEMSA. Bill Gates’ Cascade Investments LLC owns 3% of FEMSA.

Current provisions in federal law contain exceptions that allow specific export transactions, including travel to, from & within Cuba. How?

On September 3, 2009, OFAC announced final rule changes to its CACRs that impact commerce with Cuba:   Creates a new general license for travel-related transactions incident to agricultural and medical sales under TSRA   Authorizes, with certain conditions, travel-related transactions directly incident to commercial marketing, sales negotiation, accompanied delivery, or servicing in Cuba of agricultural commodities, medicine, or medical devices that appear consistent with Commerce Department export or reexport licensing policy   Travelers may rely on this general license if they are regularly employed by a producer or distributor of the agricultural or medical items or by a duly appointed representative, and if that traveler’s schedule of activities is consistent with a full work schedule. Under the new general license, written reports must be submitted to OFAC at least 14 days before departure for Cuba and within 14 days of return

  Cuba’s Tourism Ministry agrees with an estimate by the American Society of Travel Agents (ASTA) that 835,000 U.S. tourists a year, excluding cruise ships or Cuban-American family visitors, would come after an end to the travel ban.

  The U.S. International Trade Commission estimates the number of Americans visiting Cuba would more than triple from 171,000 in 2005 to between 554,000 and 1.1 million.   Cuba currently has around 48,000 hotel rooms and plans to build 30 new hotels with 10,000 rooms and 10 golf courses by 2013  Cuba’s current inventory of hotel rooms, 1,500 tour buses and 10,000 rental cars is barely adequate to meet high-season demand.   Cuba has 15 hotels under joint venture contracts with foreign companies, and 49 hotels managed by international partners. The foreign companies include Sol Melia, Accor, Barcelo, Iberostar and Sofitel.  Qatar Diar (a Qatar Investment Authority company) recently announced two new JVs in Cuba including a five-star resort.

Cuba’s pristine beaches & stunning tropical landscape have been largely undeveloped for over half a century. 

  The expected liberalization in U.S. policy towards the island and a new openness towards real estate development by the Cuban government are expected to attract large-scale investment in the following real estate projects:           

The large-scale development of a new real estate market only 90 miles from the U.S. will provide opportunities in the following real estate-related sectors:   Capital Markets

•  HR 4645 – Peterson-Moran Bill -Travel Restriction Reform and Export Enhancement Act – would repeal US travel ban and liberalize trade finance •  Introduced Feb 23, 2010 with 49 co-sponsors. Now has 62 co-sponsors •  Passed by the Agricultural Committee on June 30; expected to go to full House before August recess •  Latest House vote count is 204 – 218 needed to pass. This number is considered conservative •  Increasing possibility that the legislation will pass in the House of Representatives

Speaker of the House Nancy Pelosi has reportedly promised Rep. Peterson that she will bring bill to a full house vote if he can assure her of 218 votes

If HR 4645 passes the House, it will probably be added to an Appropriations bill in the Senate

The Senate vote would probably take place in the six weeks between US mid-term elections on Nov. 2 and Christmas recess.

According to Congressional sources, the White House has assured supporters of the bill that President Obama would sign it into law

  Cuba is seeking foreign direct investment in its information technology sector to provide employment, services to support its burgeoning tourism sector, and foreign exchange by commercializing new technology.   Cuba’s IT Development Strategy includes expansion of cellular telephone and Internet services and infrastructure modernization.   Despite a population of 11.4 million, Cuba ranks lowest in Latin America for mobile phone and internet penetration, and 5th from last in fixed-line teledensity.   A market of 1.4 million wireless subscribers is predicted by 2014.   Cuba requires state-of-the art telecommunications infrastructure to service its own population and its rapidly growing tourism sector.   Cuba insists on having access to a network of underwater cables that would provide faster connections. This underscores our view that Cuban authorities' principal objective is a "packaged deal" with an integrated telecom company for fiber optic cable connections for internet connectivity and international voice traffic.

  U.S. Geological Survey (USGS) assessed the undiscovered oil and gas reserves of the North Cuba Basin (2004)   USGS estimates: –  4.6 billion barrels of undiscovered oil –  9.8 trillion cubic feet of associated natural gas & 1.2 trillion cubic feet of non-associated gas   Cuba produced 1.7M tons of crude oil during the first half of 2009   Cuba is currently exploring its reserves with companies from Canada, Russia, China, Spain, Norway and Venezuela   Sugarcane ethanol is a promising sector for investment, as Cuba has the capacity to compete with Brazil as a major producer

  A bill introduced July 24, 2009, S. 1517, contains a provision to allow American companies to participate in Cuba’s offshore oil exploration. The bill was co-sponsored by Senator Lisa Murkowski of Alaska & Senator Mary Landrieu of Louisiana.   The bill’s Section 6 also allows Americans to explore for oil, extract oil, and sell equipment for those activities in "any portion of any foreign exclusive economic zone that is contiguous to the exclusive economic zone of the United States." The bill’s final section provides for travel to Cuba by oil industry personnel. 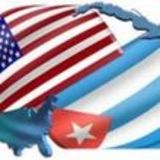