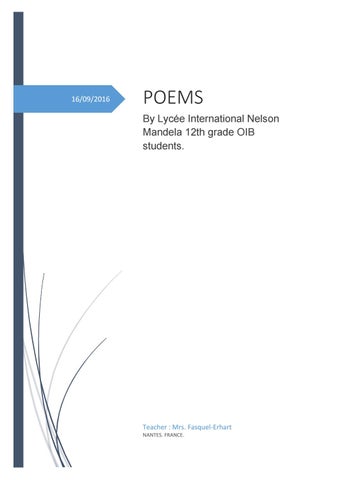 “Our teacher said, Go home and write a poem tonight. And let that page come out of you— Then, it will be true.” We’re 17, still young, what could we write about? We haven’t lived yet, born in France Went to school on the other side of the ocean, in the heat and the sun. Growing up, around a language that shouldn’t be ours Learning this culture, before our own The palm trees, warm water in December, The picture everybody’s seen, dreams about We would see it, on our doorstep Until one day we couldn’t anymore Invalid card— Unable to go home, to say goodbye Start a new life, the place we should’ve known The place we were born, that should speak to us— But it was silent. 17, still young, with two cultures separating us Only one choice remains but which will make us feel more at home How could we go if our parents were staying? But now we’ve made our choice, taking flight once again Where the sand burns and the buildings touch the skies We might be hollow but we’re brave. This is our poem for OIB By Valentine & Margaux

Tribute Ohio, 1952 Barely a whole She was encouraged to read and write, In her household Honored as Presidential scholar And later National Merit Scholar, Went on to graduate from Miami University And flew away to Germany 1993, the turning point Of her Story. Everything that caused trouble in her life, United to make her the perfect wife He married. Young, African American and a Woman Rita Dove proved the world wrong And was named Poet Laureate Not for composing songs But from writing with Passion. By Lucas, CĂŠlymĂ¨ne and Juliane

“Cycle of Ash” This fragile land, scorched By the ongoing fire Upon which I tread carefully, but I daren’t linger And hastily make way to where “the grass is greener” Nothing but hope for life And ashes of some distant relative, Perhaps a rag or two... and a couple of plums But nothing superficial I move toward the gate... And pray for it to open... Fall to my knees knowing it is all a dream... And that I will grow old outside... Gradually replacing the Ashes in the Urn

A last hello It wasn’t dark although she was It wasn’t insulting although they were What was it though? A total collapse of a girl’s small world A downfall of her surroundings, unwanted strangers 4 Never mind an old neighborhood She knew she had lost it all Would Paisley allege accidental racism? Born on a chocolate rainy day. A childhood lost in discriminating flames An everyday life full of white bead debasing looks She never fathomed the cause of such nonsense And will she ever though History repeats itself, An asinine concept That will never grow. It wasn’t sorrowful although it felt like it It wasn’t over although it looked like it What was it though? But the expiring date of a child’s limit A child’s unwilling last hello. By Kim

There are two things I admire The ones I cherish the most Dance and poetry Both smooth and wild Both soft and hard The rhythm changing the beats of your heart Both about tragedy Both about love like the American smooth of Rita Dove By Asalis, Amy and ClĂŠmence

America’s Great Again Handcuffed and restrained on the American ground Handcuffed, the Blacks are deprived of any liberty Handcuffed but still supposed to be free Handcuffed and destroyed without any sound (Running running and running and runnin’) White is good, Black is bad The Blue uniforms think They are violent But as Everyone stays silent The same. People. die (Shooting shooting and shooting and shootin’) Who pulls the trigger first? Who is the real Victim, the Innocent One or the one threatening him? And in death relies their thirst Make America great again In God They trust in vain A Minority in pain treated with disdain Trying to break Their chains America’s great again By Aymie & Alix

The Day He Met Her The little girl felt so alone The dark surroundings were frightening She tried to scream for help but remained voiceless It seemed as if, every day, she was becoming a part of this constant nightmare No matter what she did, she would sink deeper And the lights were slowly fading away The boy over there looked at me silently, As he plunged his poor little eyes into mine He was telling me the story Of how pitiless the hits were, of how kicked he was, and of how the mark on his neck would never go away As I looked closely I saw the scar on his left arm. Crying was useless at this point and screaming would only make it worse. It was on that day The day He met Her That all the lights that had once died Were appearing clearer and brighter than ever That all the tears he cried had suddenly disappeared As they shared their stories They knew. By Julie & Estelle

October The cold sweat in her neck. huh hugh -- her muscles were petrifying boom boom -- the canter of her heart hastening she could feel him panting. her swiveling eyes scrutinizing the dark, helpless nervous blood running through her veins bewildered mind restraining clear consciousness she Trips, Slips, Stumbles adrenaline blitz! tears blending in sanguine-stained cheeks unruly stream, sole beholder of her anguish high pitched cry tearing the night. His icy claw closed upon her waist. By ElĂŠa, Charlotte and Lucie

“Let there be hope” Law gives you rights. For if law dies, You are an undermined Citizen harmed by power. Equality, the key, We must start today, We want this future, But you are the abuser.

Trying to escape our torment, Our prophet has arrived, “I have a dream”, Lord will reveal its power. Hope has been given, To the citizens of America. Time for change has come, Today, we shall sing together. Once he said, "You shall not wrong a stranger Or oppress him, For you were strangers in the land of Egypt” Today we must remind them, Black, White, Rich or Poor, We are all equal by law, Where “peace its paths adorn”.

We shall march ahead. In a country with Laws protecting us all, Equal rights written by all. By Raphaël

Spinning Words You have dreams to make it big You got your passion and your pride Each day you rise and shine -Step by step You reach for the unreachable -Time goes by Tango, salsa or Varsouviana Quickstep, jive and Madison You feel rhythm from the verses And grasp each rhyme Spinning words Tip toed syllables -Sidestep, Free verse. By Matilda & Agathe

The everlasting Dove Delicacy of a soul Transcended by art as a whole A Vigorous temper With a mind filled with light Accompanied by a mutter As smooth as a Viennese night Steadfast love endures forever. Her flourishing feat, a heavy feather Her ferocious fight, a proud matter In a strange land she is no stranger. Ingenious mademoiselle In History will dwell By Suzanne & Emma

Freedom Differed Uncaged birds roaming over the ships sailing the swift open sea We watched them with envy. Can we handle what comes next? The past, the horizon, the setting sun seems to flee disgusted by human nature; Cultural Heterogeneity -- Anguish Inciting Nonsensical Soreness Like the Alabama argillacea drains cotton from human life and destroys all that is insideâ&#x20AC;Ś For mere profit And despicable pride of paper loving western souls. January. The port Luanda lays behind us keeping company to my naive freedom. By Bruno & Christel

City They don’t know what happened in the city Gossips, scandals, love stories and murders. The city moans, the city growls The young girl’s hands are trapped in mortar. Gunshots chop the night, Cries join the symphony Of the expression on her debility No more can she fight Confession? Speaking to the deaf Denunciation? She should keep it for herself The wolves will never pay The price of their mind flay Lost in her thoughts, the young girl roves She knows deep inside the snare tightens as time passes. By Tasio and Félix 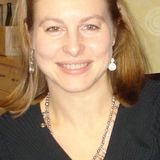