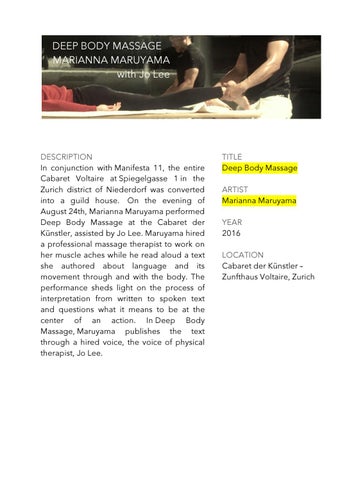 DESCRIPTION In conjunction with Manifesta 11, the entire Cabaret Voltaire at Spiegelgasse 1 in the Zurich district of Niederdorf was converted into a guild house. On the evening of August 24th, Marianna Maruyama performed Deep Body Massage at the Cabaret der Künstler, assisted by Jo Lee. Maruyama hired a professional massage therapist to work on her muscle aches while he read aloud a text she authored about language and its movement through and with the body. The performance sheds light on the process of interpretation from written to spoken text and questions what it means to be at the center of an action. In Deep Body Massage, Maruyama publishes the text through a hired voice, the voice of physical therapist, Jo Lee.

WORKOUT FOR THE BREATH/BODY AS A PREPARATION TO SPEAK

“It is not about having a ‘voice’ it is about siting ‘voice’, locating the spaces and actions through which it becomes possible to be in one’s languages.” - C.Bergvall As we move from the comfortable zone of our mother tongue, and we enter the sound (and the culture) of another language, the words we choose, the intonation we have, the accent that resists and suddenly resurfaces, become all important elements to define where we are. To speak creates indeed a space, the space we inhabit and who we are while we speak. Drawing upon this awareness, in the performance Deep Body Massage, Marianna Maruyama brings our attention to the moments that precede this action – as a way to highlight once more the physical relationship existing between our body and the act of speaking, and more generally between language and body. The audience brought around the yoga bed to witness the artist having a massage in reality is taking part to what could be a ritual of preparation, to get the body ready both to utter a sound, and to listen to one. This light training/work-out is a way to enhance the awareness of our body, to assure somehow that our junctures and muscles all work towards a common goal:

that there are no obstacles, no interruptions, to the circulation of energies and the fluidity of the breath inside of us. The last aspect in particular is an interesting effect. We do not have to forget indeed that, as Caroline Bergvall has reminded us, there is breathing within speaking: “…the opening to the breath. It starts in here, at the source of one’s own breathing, through the life pulse rising in the throat, carried through it in a transport of air. Language circulates in this conduit of air and shapes its articulated vibrations into both verbal and non-verbal sounds, semantic and somatic events, that can all be made manifest as language.” The potential of this yoga massage – as a ritual that through the body directly touches on the world of language – becomes clearer as it is happening. While the masseur warms up and stretches the artist’s arms, neck, and the muscles of her spine, he lists what seem to be the artist’s thoughts on the challenges of language and translation. Language is a space of continuous negotiations, a contested space where “we did not agree about anything in particular”. We can recognize a specific accent of the speaker, a particular word and its definition, but yet “that definition is particular to you”. The more we are made aware of the tensions existing between speakers and listeners, and the (im)possibilities of language, the more we start wondering how then to avoid chaos and misunderstandings. A possible direction is provided towards the end of the performance. The masseur announces that mutual understanding is an act of construction. It is not a smooth process but on the contrary, similarly to being in a relationship, it calls for full participation, care and dedication. Understanding each other through words, seem than to be an act of daring, possible only if one cares for the other and is open to change. It implies indeed “questioning and transforming oneself”, rather then copying (and repeating).” Perhaps it does not really matter here if one speaks his own mother language or an adopted one, being the International English or Dutch, understanding through words of a known or less known language is always molded by our bodily and mental disposition in the process of speaking and listening to others.

The central question is about getting our body ready in order to speak, preparing one’s own voice to come out, and the one of the other to reach us. We need preparation – even from a physical point of view, and it is up to each of us to choose the best way to train our bodies to be ready to utter and receive meaningful sounds. “We are born in languages, and we move in and out of them. We learn languages to convince others we belong, and we lose them for the same reasons. We choose our tools carefully, we choose our words carefully, and choose the circumstances, the voice, and the time to speak. (..) The body is the limit of all this. We stop and start with the body.” 30 September 2016 All quotes are from Maruyama’s performance except when stated differently.

Jan Adriaans, artist It reminds me a bit of Dan Graham’s mirror performances in the seventies, where the audience could also see themselves. There's a questioning of who is being exposed. Here the person being massaged is not reflecting on his treatment, the masseur takes the role of a messenger and proclaims messages which are physical and textual: two different states of mind, but strongly interconnected. I really appreciate the masseur’s concentration, as though he is struggling to shift his focus from the manual action to the memory and delivery of the text, and back again. The automation of his action shows his professional background. The performance itself becomes a metaphor for the concept. There's simplicity in the set up and clothes which is very effective for the viewer, who is able to focus on the action and the text. Witnessing the masseur sweating, as well as seeing the double image in the mirror, places you directly in a live moment: no possibility for a take two or three. His voice sounds resolute but also slightly deformed, a bit alienated like machinery, unsure of whether it belongs to the body it’s leaving from. This exercise states translation with power as a insecure state of constant orientation and assessment. 28 September 2016

MartĂ­n La Roche Contreras, artist As I write about Deep Body Massage I inevitably canâ&#x20AC;&#x2122;t help thinking about the relation between language and the movement it produces. In this case my hands are moved by my thoughts on this performance, to type and retype words that will describe what I was able to grasp from the action. When a word is spoken and imposed on an action there is a whole new world that flourishes from the encounter. Sometimes we tend to assume that the words are mere tools for describing what we perceived (just communication tools), and I think because of that we forget how much words are transforming everything they name. The productive tool of language is constantly giving movement to our encounter with the experience, in some cases even to the point of trying to become the whole experience. But the same can be said of the experience itself, that battles to regain its meaning while leaving language as a dated tool to describe what is happening. In this performance the struggle between the massage and the spoken text transforms this battle into a fertile, in- between field, open to rethink language as something that lives and moves within our actions; it is particularly here where meaning comes into being. 30 September 2016

Nina Glockner, artist A professional body treats a passive body while declaiming a text on translation. He articulates words and movements simultaneously. The words sound parallel to the rhythm of the movements. The other body is almost objectified by being manipulated, articulated. I want to grasp the words, follow the line of thought, yet I am continuously drawn towards the physical actions – triggering empathy for the anatomic conditions of both the performers and myself. Shifting my focus from–words–to–body–from–body–to–words questions the putative separation of body and mind, causes an ambivalence of cognitive and physical occupation with the witnessed situation. This in-betweenness accurately depicts the nature of translation, and leaves me yearning for a deep massage of my left and right hemispheres. 16 October 2016

We travel between languages, losing and gaining parts along the way.

Language doesn’t only allow for transformation,

it insists on it. Translation is part of this process, of carrying a body.