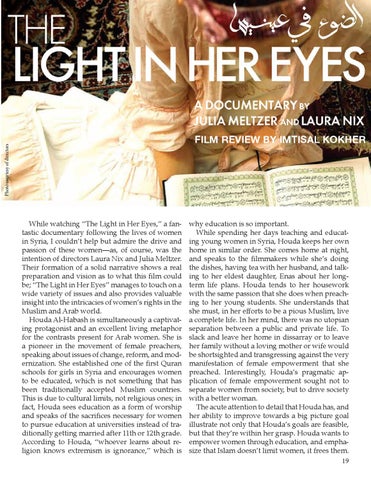 While watching “The Light in Her Eyes,” a fantastic documentary following the lives of women in Syria, I couldn’t help but admire the drive and passion of these women—as, of course, was the intention of directors Laura Nix and Julia Meltzer. Their formation of a solid narrative shows a real preparation and vision as to what this film could be; “The Light in Her Eyes” manages to touch on a wide variety of issues and also provides valuable insight into the intricacies of women’s rights in the Muslim and Arab world. Houda Al-Habash is simultaneously a captivating protagonist and an excellent living metaphor for the contrasts present for Arab women. She is a pioneer in the movement of female preachers, speaking about issues of change, reform, and modernization. She established one of the first Quran schools for girls in Syria and encourages women to be educated, which is not something that has been traditionally accepted Muslim countries. This is due to cultural limits, not religious ones; in fact, Houda sees education as a form of worship and speaks of the sacrifices necessary for women to pursue education at universities instead of traditionally getting married after 11th or 12th grade. According to Houda, “whoever learns about religion knows extremism is ignorance,” which is

why education is so important. While spending her days teaching and educating young women in Syria, Houda keeps her own home in similar order. She comes home at night, and speaks to the filmmakers while she’s doing the dishes, having tea with her husband, and talking to her eldest daughter, Enas about her longterm life plans. Houda tends to her housework with the same passion that she does when preaching to her young students. She understands that she must, in her efforts to be a pious Muslim, live a complete life. In her mind, there was no utopian separation between a public and private life. To slack and leave her home in dissarray or to leave her family without a loving mother or wife would be shortsighted and transgressing against the very manifestation of female empowerment that she preached. Interestingly, Houda’s pragmatic application of female empowerment sought not to separate women from society, but to drive society with a better woman. The acute attention to detail that Houda has, and her ability to improve towards a big picture goal illustrate not only that Houda’s goals are feasible, but that they’re within her grasp. Houda wants to empower women through education, and emphasize that Islam doesn’t limit women, it frees them. 19 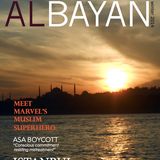 AlBayan is a magazine by Muslim students at Northwestern University that seeks to cover the American Muslim experience.

AlBayan is a magazine by Muslim students at Northwestern University that seeks to cover the American Muslim experience.