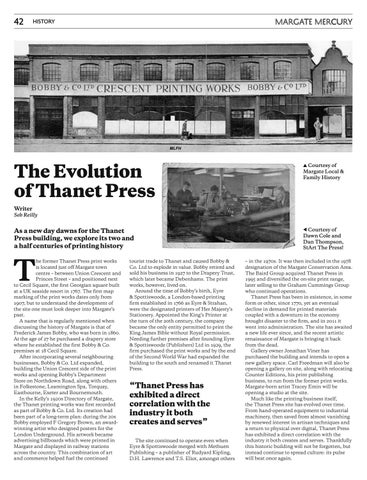 The Evolution of Thanet Press

As a new day dawns for the Thanet Press building, we explore its two and a half centuries of printing history

he former Thanet Press print works is located just off Margate town centre – between Union Crescent and Princes Street – and positioned next to Cecil Square, the first Georgian square built at a UK seaside resort in 1767. The first map marking of the print works dates only from 1907, but to understand the development of the site one must look deeper into Margate’s past. A name that is regularly mentioned when discussing the history of Margate is that of Frederick James Bobby, who was born in 1860. At the age of 27 he purchased a drapery store where he established the first Bobby & Co. premises at 18 Cecil Square. After incorporating several neighbouring businesses, Bobby & Co. Ltd expanded, building the Union Crescent side of the print works and opening Bobby’s Department Store on Northdown Road, along with others in Folkestone, Leamington Spa, Torquay, Eastbourne, Exeter and Bournemouth. In the Kelly’s 1920s Directory of Margate, the Thanet printing works was first recorded as part of Bobby & Co. Ltd. Its creation had been part of a long-term plan: during the 20s Bobby employed F Gregory Brown, an awardwinning artist who designed posters for the London Underground. His artwork became advertising billboards which were printed in Margate and displayed in railway stations across the country. This combination of art and commerce helped fuel the continued

tourist trade to Thanet and caused Bobby & Co. Ltd to explode in value. Bobby retired and sold his business in 1927 to the Drapery Trust, which later became Debenhams. The print works, however, lived on. Around the time of Bobby’s birth, Eyre & Spottiswoode, a London-based printing firm established in 1766 as Eyre & Strahan, were the designated printers of Her Majesty’s Stationery. Appointed the King’s Printer at the turn of the 20th century, the company became the only entity permitted to print the King James Bible without Royal permission. Needing further premises after founding Eyre & Spottiswoode (Publishers) Ltd in 1929, the firm purchased the print works and by the end of the Second World War had expanded the building to the south and renamed it Thanet Press.

“Thanet Press has exhibited a direct correlation with the industry it both creates and serves” The site continued to operate even when Eyre & Spottiswoode merged with Methuen Publishing – a publisher of Rudyard Kipling, D.H. Lawrence and T.S. Eliot, amongst others

◄ Courtesy of Dawn Cole and Dan Thompson, StArt The Press! – in the 1970s. It was then included in the 1978 designation of the Margate Conservation Area. The Baird Group acquired Thanet Press in 1995 and diversified the on-site print range, later selling to the Graham Cummings Group who continued operations. Thanet Press has been in existence, in some form or other, since 1770, yet an eventual decline in demand for printed materials coupled with a downturn in the economy brought disaster to the firm, and in 2011 it went into administration. The site has awaited a new life ever since, and the recent artistic renaissance of Margate is bringing it back from the dead. Gallery owner Jonathan Viner has purchased the building and intends to open a new gallery space. Carl Freedman will also be opening a gallery on site, along with relocating Counter Editions, his print publishing business, to run from the former print works. Margate-born artist Tracey Emin will be opening a studio at the site. Much like the printing business itself, the Thanet Press site has evolved over time. From hand-operated equipment to industrial machinery, then saved from almost vanishing by renewed interest in artisan techniques and a return to physical over digital, Thanet Press has exhibited a direct correlation with the industry it both creates and serves. Thankfully this historic building will not be forgotten, but instead continue to spread culture: its pulse will beat once again.

The Margate Mercury is a free quarterly magazine about modern-day life and culture in the British seaside town of Margate. We feature the mo...

The Margate Mercury is a free quarterly magazine about modern-day life and culture in the British seaside town of Margate. We feature the mo...