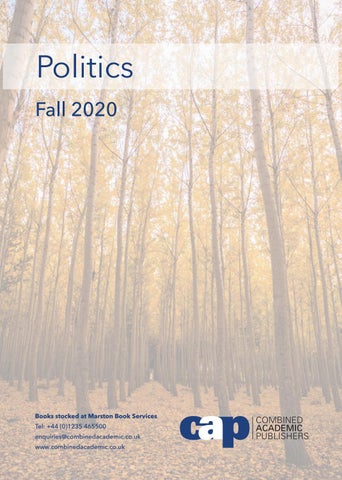 A Critical Political Economy of the Middle East and North Africa

A History of False Hope

This book oﬀers a provocative retelling of Palestinian political history through an examination of the international commissions that have investigated political violence and human rights violations.

The ﬁrst critical engagement with the political economy of the Middle East and North Africa.

A is for Asylum Seeker: Words for People on the Move / A de asilo: palabras para personas en movimiento

Considers how women, people of color, and genderqueer activists struggled to be heard and understood. Despite cries of “We are the 99%,” certain groups were unable to participate.  Excludes Asia Pacific

A clear and concise A-to-Z of keywords that echo our current human rights crisis.

Artiﬁcial Life After Frankenstein brings the insights born of Mary Shelley’s legacy to bear upon the ethics and politics of making artiﬁcial life and intelligence in the twenty-ﬁrst century.

Chakrabarti argues that the “local” should be reconceptualized as an abstract machine, central to the construction of the universal, namely, the establishment of political economy as a form of governance in nineteenth-century British India.

At the Pleasure of the Crown

Reveals that although the qualities that Canadian governments look for in senior public servants are subject to change, the political nature of bureaucratic appointments is enduring. Excludes SE Asia, Indian SC & ANZ

Doing Less with Less in the BC Liberal New Era George M. Abbott

Explores the history of illegal immigration, migrant labor, and the early formation of U.S. immigration policy along the country’s northern border, demonstrating how this region inﬂuenced the practices and experiences surrounding illegal immigration in early 20th century industrial US.

Recounts the story of Canadian policy toward East Timor from the 1975 invasion to the 1999 vote for independence. Excludes SE Asia, Indian SC & ANZ

Scholars have long examined the relationship between nation-states and their “internal others,” such as immigrants and ethnoracial minorities. This book shifts the analytic focus to explore how a state relates to people it views as “external members” such as emigrants and diasporas.

Russo rethinks the history of China’s Cultural Revolution, arguing that it must be understood as a mass political experiment aimed at thoroughly reexamining the tenets of communism itself.

A distinguished group of interdisciplinary scholars explore the key questions and challenges facing democracies, both in the past and present, around the world. Excludes SE Asia & ANZ

Examines the personal and political factors behind soldiers’ choices to stay in their unit or abandon their cause. Explores what might spur widespread desertion in a given group, how some armed groups manage to keep their soldiers ﬁghting over long periods, and how committed soldiers are to their causes and their comrades.

Brings new perspective to the crisis of inequality during the Gilded Age. Examining how party leaders governed by accumulating wealth through the spoils system, Broxmeyer places in historical context debates over capitalism and democracy that continue to resonate today.

Elementary Aspects of the Political

Washington, Moscow, and the Beginning of the End of the Cold War Simon Miles

Histories from the Global South

Moves beyond postcolonial and decolonial critiques of European political philosophy to rethink modern conceptions of “the political” from the perspective of Indian and Bengali practices and philosophies from the late nineteenth and early twentieth centuries.

Tracking key events in US-Soviet relations across the years between 1980 and 1985, Engaging the Evil Empire dramatically alters how we look at the beginning of the end of the Cold War.

Fear in Our Hearts

What Islamophobia Tells Us about America Caleb Iyer Elfenbein

Advocacy and Blame in the Global Fight against Hunger Michelle Jurkovich

Arguing that anti-Muslim activity tells us as much about the state of core American values in general as it does about the particular experiences of American Muslims, oﬀers practical ideas about how we can create a more welcoming public life for all in our everyday lives. Excludes SE Asia & ANZ

Investigates advocacy around the right to food and challenges existing understandings of the relationships among human rights, norms, and laws. Provides an expanded conceptual toolkit with which we can examine and understand the social and moral forces at play in rights advocacy.

From Collective Bargaining to Collective Begging How Public Employees Win and Lose the Right to Bargain Dominic D. Wells

Black Abolitionists and the Politics of Violence Kellie Carter Jackson

How do public employees win and lose their collective bargaining rights? And how can public sector labor unions protect those rights? These are the questions answered here. Excludes Asia Pacific

Gramsci in the World

Examines the varying receptions and uses of Antonio Gramsci’s thought in diverse geographical, historical, and political contexts, highlighting its possibilities and limits for understanding and changing the social world.

Presents a nuanced picture of Russian political thought during the two centuries before Peter the Great came to power.

How to Prevent Coups d’État

Looks at the threats that rulers face from their own armed forces. Can rulers make their regimes coup-proof? Data from 110 countries over ﬁfty years and case studies of coup attempts in Asia, Africa, Latin America, and the Middle East.

In Defense of Populism

Covering progressivism in the early twentieth century, the New Deal, civil rights activism, the Reagan Revolution, and the environmental and Tea Party movements, In Defense of Populism argues that grassroots activism is essential to transforming both Democratic and Republican parties into instruments of reform.

Indonesian Pluralities oﬀers important insights on the state of Indonesian politics and society more than twenty years after its return to democracy.

No Place for the State

Besteman oﬀers a sweeping theorization of the ways in which countries from the global North are reproducing South Africa’s apartheid system on a worldwide scale to control the mobility and labor of people from the global South.

Queering Representation explores long-ignored Explores the relationship between policymakers issues relating to LGBTQ voters and politicians in and non-government advocates in Latin America Canada.  and the US government in order to explain the Excludes SE Asia, Indian SC & ANZ rise of anti-interventionist human rights policies uniquely critical of US power during the Cold War.

The ﬁrst major study to compare changes made to Canadian and US refugee law after and because of 9/11, Refugee Law after 9/11 uncovers crucial connections among refugee law, security relativism, and national self-image. Excludes SE Asia, Indian SC & ANZ

Considers how people have confronted, challenged, and resisted remote warfare. Remote Warfare interrogates the cultural and political dimensions of distant warfare and examines how various stakeholders have responded to the reality of state-sponsored remote violence. Excludes Japan & ANZ

From Petro-Nationalism to Post-Extractivism in Ecuador Thea Riofrancos

Explores the politics of extraction, energy, and infrastructure in contemporary Ecuador in order to understand how resource dependency becomes a dilemma for leftist governments and movements alike.

The Character of American Democracy

Preserving Our Past, Protecting Our Future Jill Long Thompson

This book deconstructs the whole lineage of political philosophy, showing the ways democracy abuts and regularly undermines the sovereignist tradition across a range of texts from the Iliad to contemporary philosophy.

In this uncompromising, absorbing look at our government and society today, Jill Long Thompson persuasively argues that we all have a meaningful role to play in shaping America’s character and future.

Or, Home and Homelessness in Israel/Palestine Hagar Kotef

Explores the cultural, political, spatial, and theoretical mechanisms that enable people and nations to settle on the ruins of other people’s homes, showing how settler-colonial violence becomes inseparable from one’s sense of self.

In essays addressing topics ranging from cinema, feminism, and art to hip hop, urban slums, and digital technology, Sujatha Fernandes explores the multitudinous ways ordinary Cubans have sought to hustle, survive, and create expressive cultures in the aftermath of the Soviet Union’s collapse.

The Cult of the Constitution

The Dangers of Poetry

The Dangers of Poetry is the ﬁrst book to narrate the social history of poetry in the modern Middle East. Moving beyond the analysis of poems as literary and intellectual texts, Kevin M. Jones shows how poems functioned as social acts that critically shaped the cultural politics of revolutionary Iraq.

The Edge of Knowing

Leaders and Exile in an Era of Accountability Daniel Krcmaric

Realism and the rhetoric of dreams intersected in modern Chinese literature from the May Fourth Era in the early twentieth century through the period following the end of the Cultural Revolution in 1976. This book shows how writers’ attention to dreams demonstrates the multiple inﬂuences of Western psychology and utopian desire for revolutionary change.

The Misunderstood History of Gentrification

Art and State Violence in Turkey and Germany Banu Karaca

Based on long-term ethnographic research in the art worlds of Istanbul and Berlin, The National Frame rethinks the politics of art by focusing on the role of art in state governance.

The Practice of Human Development and Dignity

Since the ﬁrst atomic weapon was detonated in 1945, Canadians have debated their country’s role in a nuclear world. This book investigates questions in these ongoing debates. Excludes SE Asia, Indian SC & ANZ

The Priority of the Person

The Beginning and the Beyond of Politics

The Subject of Human Rights is the ﬁrst book to Walsh advances his argument that “person” is the systematically address the “human” part of central category of modern political thought and “human rights.”  philosophy.

Toward a Feminist Ethics of Nonviolence

Trump, Corruption, and the Revolution to Come Timothy K. Kuhner

Democracy is being destroyed by an ancient evil, and modernity is in denial. In the Tyranny of Greed, Timothy K. Kuhner reveals the United States to be a government by and for Toward a Feminist Ethics of Nonviolence brings the wealthy, with Trump—the spirit of inﬁnite together major feminist thinkers to debate Cavarero’s call for a postural ethics of nonviolence greed—at its helm. and a sociality rooted in bodily interdependence.

George M. Houser and the Struggle for Peace and Freedom on Two Continents Sheila D. Collins

George M. Houser’s moral integrity and inﬂuential advocacy for nonviolent protest helped shape the American Civil Rights Movement, anticolonial independence victories across Africa, and Paul Schuler examines the past and present functioning of the Vietnam National Assembly the overthrow of the South African apartheid (VNA), arguing that the legislature's primary role regime. is to signal strength to the public.

The View from the Trenches Jean Reith Schroedel

Voting in Indian Country uses conﬂicts over voting rights to understand the In 2001, Ethiopian Television aired a documentary centuries-long ﬁght for Native self-determination, about a rural village which challenged images of using ethnographic data and weaving together Ethiopia as gender-conservative and aidhistory, politics, and law to provide a robust view dependent. This book uses this to consider the of this often-ignored struggle for social justice. circulation and use of modeling practices in a transnational and digital policy world.

War and Genocide in South Sudan

Traces the rise of a predatory state during civil war in southern Sudan and its transformation into a violent Dinka ethnocracy after the region’s formal independence. That new state, Pinaud argues, waged genocide against non-Dinka civilians in 2013-2017.

The Politics of Law in the European Union Tanja A. Börzel

Traces the history of noncompliance within the European Union (EU), focusing on which states continuously do or do not follow EU Law, why, and how that aﬀects the governance in the EU and beyond.

Argues that women are as capable as men of committing war crimes and crimes against humanity. Highlights the gendered dynamics of law, demonstrating that women are adept at using gender instrumentally to ﬁght for better conditions when war ends.

World Literature for the Wretched of the Earth

Foregrounds anticolonial theories of reading to reveal an alternative strain of anticolonialism committed not to the forms of authority that facilitate political recognition, but to inexpertise and inconsequence.