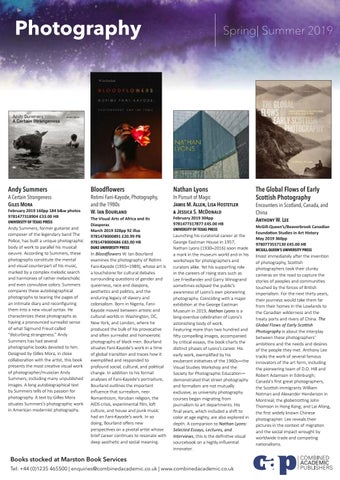 Andy Summers, former guitarist and composer of the legendary band The Police, has built a unique photographic body of work to parallel his musical oeuvre. According to Summers, these photographs constitute the mental and visual counterpart of his music, marked by a complex melodic search and harmonies of rather melancholic and even convulsive colors. Summers compares these autobiographical photographs to tearing the pages of an intimate diary and reconﬁguring them into a new visual syntax. He characterizes these photographs as having a pronounced surrealist sense of what Sigmund Freud called “disturbing strangeness.” Andy Summers has had several photographic books devoted to him. Designed by Gilles Mora, in close collaboration with the artist, this book presents the most creative visual work of photographer/musician Andy Summers, including many unpublished images. A long autobiographical text by Summers tells of his passion for photography. A text by Gilles Mora situates Summers’s photographic work in American modernist photography.

In Bloodﬂowers W. Ian Bourland examines the photography of Rotimi Fani-Kayode (1955–1989), whose art is a touchstone for cultural debates surrounding questions of gender and queerness, race and diaspora, aesthetics and politics, and the enduring legacy of slavery and colonialism. Born in Nigeria, FaniKayode moved between artistic and cultural worlds in Washington, DC, New York, and London, where he produced the bulk of his provocative and often surrealist and homoerotic photographs of black men. Bourland situates Fani-Kayode's work in a time of global transition and traces how it exempliﬁed and responded to profound social, cultural, and political change. In addition to his formal analyses of Fani-Kayode's portraiture, Bourland outlines the important inﬂuence that surrealism, neoRomanticism, Yoruban religion, the AIDS crisis, experimental ﬁlm, loft culture, and house and punk music had on Fani-Kayode's work. In so doing, Bourland oﬀers new perspectives on a pivotal artist whose brief career continues to resonate with deep aesthetic and social meaning.

Launching his curatorial career at the George Eastman House in 1957, Nathan Lyons (1930–2016) soon made a mark in the museum world and in his workshops for photographers and curators alike. Yet his supporting role in the careers of rising stars such as Lee Friedlander and Garry Winogrand sometimes eclipsed the public’s awareness of Lyons’s own pioneering photography. Coinciding with a major exhibition at the George Eastman Museum in 2019, Nathan Lyons is a long-overdue celebration of Lyons’s astonishing body of work. Featuring more than two hundred and ﬁfty compelling images, accompanied by critical essays, the book charts the distinct phases of Lyons’s career. His early work, exempliﬁed by his exuberant initiatives of the 1960s—the Visual Studies Workshop and the Society for Photographic Education— demonstrated that street photography and formalism are not mutually exclusive, as university photography courses began migrating from journalism to art departments. His ﬁnal years, which included a shift to color at age eighty, are also explored in depth. A companion to Nathan Lyons: Selected Essays, Lectures, and Interviews, this is the deﬁnitive visual sourcebook on a highly inﬂuential innovator.

lmost immediately after the invention of photography, Scottish photographers took their clunky cameras on the road to capture the stories of peoples and communities touched by the forces of British imperialism. For the next thirty years, their journeys would take them far from their homes in the Lowlands to the Canadian wilderness and the treaty ports and rivers of China. The Global Flows of Early Scottish Photography is about the interplay between these photographers' ambitions and the needs and desires of the people they met. Anthony Lee tracks the work of several famous innovators of the art form, including the pioneering team of D.O. Hill and Robert Adamson in Edinburgh; Canada's ﬁrst great photographers, the Scottish immigrants William Notman and Alexander Henderson in Montreal; the globetrotting John Thomson in Hong Kong; and Lai Afong, the ﬁrst widely known Chinese photographer. Lee reveals their pictures in the context of migration and the social impact wrought by worldwide trade and competing nationalisms.

Ann Elias traces the history of two explorers whose photographs and ﬁlms of tropical reefs in the 1920s cast corals and the sea as an unexplored territory to be exploited in ways that tied the tropics and reefs to colonialism, racism, and the human domination of nature.

Originally published in 1981, Concrete Mama revealed a previously unseen stark and complex world of life on the inside, for which it won the Washington State Book Award. Long unavailable yet still relevant, this second edition includes an introduction by scholar Dan Berger that provides historical context along with previously unpublished photographs.

Pilgrims of Woodstock oﬀers a vivid and intimate portrait of the overlooked stars of the festival: the everyday people who made Woodstock unforgettable. Experience the real and unedited Woodstock through Richard Bellak’s never-beforeseen photographs and John Kane’s incredible new interviews.

Elspeth H. Brown traces modeling’s history from the advent of photographic modeling in the early twentieth century to the rise of the supermodel in the 1980s, showing how it is both the quintessential occupation of a modern consumer economy and a practice that has been shaped by queer sensibilities.

Recipient of a 2017 MacArthur Foundation “genius grant,” Dawoud Bey has created a body of photography that masterfully portrays the contemporary American experience on its own terms and in all of its diversity. Oﬀers a forty-year retrospective of the celebrated photographer’s work, from his early street photography in Harlem to his current images of Harlem gentriﬁcation.

Reminiscent of the work of James Agee and Walker Evans, John Berger and Jean Mohr, this volume presents a searing photo documentary of life in southern Brazil by the award-winning artist and activist Maria Thereza Alves.

Racioppo’s 128 photographs are paired with essays from journalist Tom Robbins and art critic and curator Julia Van Haaften. Taken together, the images and words of this book return us to pre-gentriﬁcation Brooklyn and immerse us in a community deﬁned by work, family, and ethnic ties.

The Street Philosophy of Garry Winogrand

A masterfully curated selection of one hundred photographs from the Winogrand archive at the Center for Creative Photography, with each image accompanied by an original essay. Dyer takes the viewer/reader on a wildly original journey through both iconic and unseen images from the archive, including eighteen previously unpublished color photographs.