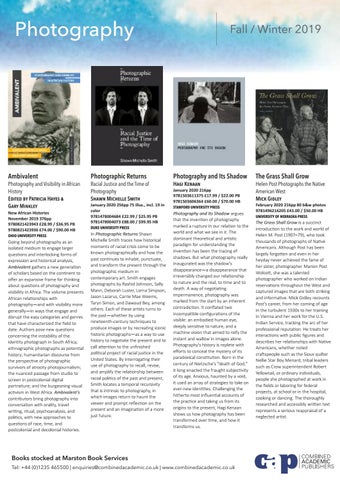 Going beyond photography as an isolated medium to engage larger questions and interlocking forms of expression and historical analysis, Ambivalent gathers a new generation of scholars based on the continent to oﬀer an expansive frame for thinking about questions of photography and visibility in Africa. The volume presents African relationships with photography—and with visibility more generally—in ways that engage and disrupt the easy categories and genres that have characterized the ﬁeld to date. Authors pose new questions concerning the instability of the identity photograph in South Africa; ethnographic photographs as potential history; humanitarian discourse from the perspective of photographic survivors of atrocity photojournalism; the nuanced passage from studio to screen in postcolonial digital portraiture; and the burgeoning visual activism in West Africa. Ambivalent’s contributors bring photography into conversation with orality, travel writing, ritual, psychoanalysis, and politics, with new approaches to questions of race, time, and postcolonial and decolonial histories.

Racial Justice and the Time of Photography Shawn Michelle Smith

In Photographic Returns Shawn Michelle Smith traces how historical moments of racial crisis come to be known photographically and how the past continues to inhabit, punctuate, and transform the present through the photographic medium in contemporary art. Smith engages photographs by Rashid Johnson, Sally Mann, Deborah Luster, Lorna Simpson, Jason Lazarus, Carrie Mae Weems, Taryn Simon, and Dawoud Bey, among others. Each of these artists turns to the past—whether by using nineteenth-century techniques to produce images or by recreating iconic historic photographs—as a way to use history to negotiate the present and to call attention to the unﬁnished political project of racial justice in the United States. By interrogating their use of photography to recall, revise, and amplify the relationship between racial politics of the past and present, Smith locates a temporal recursivity that is intrinsic to photography, in which images return to haunt the viewer and prompt reﬂection on the present and an imagination of a more just future.

Photography and Its Shadow Hagi Kenaan

Photography and Its Shadow argues that the invention of photography marked a rupture in our relation to the world and what we see in it. The dominant theoretical and artistic paradigm for understanding the invention has been the tracing of shadows. But what photography really inaugurated was the shadow's disappearance—a disappearance that irreversibly changed our relationship to nature and the real, to time and to death. A way of negotiating impermanence, photography was marked from the start by an inherent contradiction. It conﬂated two incompatible conﬁgurations of the visible: an embodied human eye, deeply sensitive to nature, and a machine vision that aimed to reify the instant and wallow in images alone. Photography's history is replete with eﬀorts to conceal the mystery of its paradoxical constitution. Born in the century of Nietzsche's "death of God," it long enacted the fraught subjectivity of its age. Anxious, haunted by a void, it used an array of strategies to take on ever-new identities. Challenging the hitherto most inﬂuential accounts of the practice and taking us from its origins to the present, Hagi Kenaan shows us how photography has been transformed over time, and how it transforms us.

The Grass Shall Grow

The Grass Shall Grow is a succinct introduction to the work and world of Helen M. Post (1907–79), who took thousands of photographs of Native Americans. Although Post has been largely forgotten and even in her heyday never achieved the fame of her sister, photographer Marion Post Wolcott, she was a talented photographer who worked on Indian reservations throughout the West and captured images that are both striking and informative. Mick Gidley recounts Post’s career, from her coming of age in the turbulent 1930s to her training in Vienna and her work for the U.S. Indian Service, tracking the arc of her professional reputation. He treats her interactions with public ﬁgures and describes her relationships with Native Americans, whether noted craftspeople such as the Sioux quilter Nellie Star Boy Menard, tribal leaders such as Crow superintendent Robert Yellowtail, or ordinary individuals, people she photographed at work in the ﬁelds or laboring for federal projects, at school or in the hospital, cooking or dancing. The thoroughly researched and accessibly written text represents a serious reappraisal of a neglected artist.

From her hand-colored, machinestitched photographic prints to her artist’s books and well-known Mountain Dream Tarot card deck (the ﬁrst-known photographic treatment of the tarot) Bea Nettles’s work has always upended tradition. Bea Nettles: Harvest of Memory presents the span of her art across half a century, in conjunction with an exhibition coorganized by the George Eastman Museum in Rochester, New York, and the Sheldon Art Galleries in St. Louis, Missouri. Recognized for her innovations in mixed-media photography, Nettles used alternative photographic processes that produced textured works, with subjects including self-portraits; investigations of the body and its relationship to nature and landscape; and the experience of mothering, loss, and aging. A tremendously productive artist, Nettles has received critical acclaim, and her work has become part of museum permanent collections from coast to coast. Now, for the ﬁrst time in her ﬁfty-year career, Bea Nettles: Harvest of Memory oﬀers a large-scale retrospective of an artist who profoundly illuminates our inner worlds.

Born in Hungary in 1928, Gabor Szilasi is one of Quebec's best-known living photographers. Soon after settling in Montreal in 1959, Szilasi began photographing the many art openings that he regularly attended with his wife, artist Doreen Lindsay. Over the next two decades he produced an extensive photographic record of the individuals who comprised Montreal's visual arts community, a number of whom would shape the history of art in Canada. Expanding on a solo exhibition of Szilasi's photographs that took place at the McCord Museum in 2017, the book features three essays, an interview, and over one hundred images that capture, with characteristic candour, perspicacity, and wit, some of the radical changes that aﬀected Montreal's art world throughout the 1960s and 1970s. Szilasi's signiﬁcant body of work totalling approximately 3,600 negatives - provides a rare look at the social lives of Canadian artists during a time of great eﬀervescence and creative possibility. Gabor Szilasi: The Art World in Montreal invites reﬂection on what has since been lost and gained. Brought to light over ﬁfty years after they were taken, the images featured in this book reveal the centrality of one of Canada's leading photographers to the milieu he calls home. Excludes Asia Pacific

Tradition in the Frame

Sfakians on the island of Crete are known for their distinctive dress and appearance, ﬁerce ruggedness, and devotion to traditional ways. Konstantinos Kalantzis explores how Sfakians live with the burdens and pleasures of maintaining these expectations of exoticism for themselves, for their fellow Greeks, and for tourists. Sfakian performance of masculine tradition has become even more meaningful for Greeks looking to reimagine their nation’s global standing in the wake of stringent ﬁnancial regulation, and for non-Greek tourists yearning for rootedness and escape from the postindustrial north. Through ﬁne-grained ethnography that pays special attention to photography, Tradition in the Frame explores the ambivalence of a society expected to conform to outsiders’ perception of the traditional even as it strives to enact its own vision of tradition. From the bodily reenactment of historical photographs to the unpredictable, emotionallycharged uses of postcards and commercial labels, the book unpacks the question of power and asymmetry but also uncovers other political possibilities that are nested in visual culture and experiences of tradition and the past. Kalantzis explores the crossroads of cultural performance and social imagination where the frame is both empowerment and subjection.

In Unﬁxed Jennifer Bajorek traces the relationship between photography and decolonial political imagination in Francophone west Africa in the years immediately leading up to and following independence from French colonial rule in 1960. Focusing on images created by photographers based in Senegal and Benin, Bajorek draws on formal analyses of images and ethnographic ﬁeldwork with photographers to show how photography not only reﬂected but also actively contributed to social and political change. The proliferation of photographic imagery—through studio portraiture, bureaucratic ID cards, political reportage and photojournalism, magazines, and more—provided the means for west Africans to express their experiences, shape public and political discourse, and reimagine their world. In delineating how west Africans' embrace of photography was associated with and helped spur the democratization of political participation and the development of labor and liberation movements, Bajorek tells a new history of photography in west Africa—one that theorizes photography's capacity for doing decolonial work.