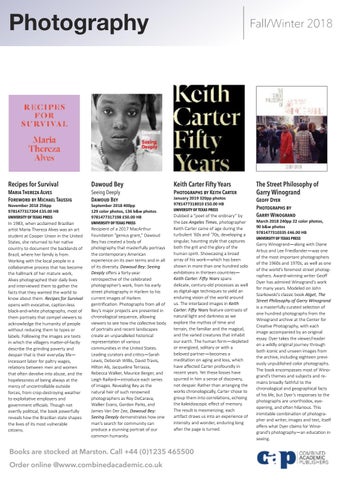 In 1983, when acclaimed Brazilian artist Maria Thereza Alves was an art student at Cooper Union in the United States, she returned to her native country to document the backlands of Brazil, where her family is from. Working with the local people in a collaborative process that has become the hallmark of her mature work, Alves photographed their daily lives and interviewed them to gather the facts that they wanted the world to know about them. Recipes for Survival opens with evocative, caption-less black-and-white photographs, most of them portraits that compel viewers to acknowledge the humanity of people without reducing them to types or labels. Following the images are texts in which the villagers matter-of-factly describe the grinding poverty and despair that is their everyday life— incessant labor for paltry wages, relations between men and women that often devolve into abuse, and the hopelessness of being always at the mercy of uncontrollable outside forces, from crop-destroying weather to exploitative employers and government oﬃcials. Though not overtly political, the book powerfully reveals how the Brazilian state shapes the lives of its most vulnerable citizens.

Recipient of a 2017 MacArthur Foundation “genius grant,” Dawoud Bey has created a body of photography that masterfully portrays the contemporary American experience on its own terms and in all of its diversity. Dawoud Bey: Seeing Deeply oﬀers a forty-year retrospective of the celebrated photographer’s work, from his early street photography in Harlem to his current images of Harlem gentriﬁcation. Photographs from all of Bey’s major projects are presented in chronological sequence, allowing viewers to see how the collective body of portraits and recent landscapes create an unparalleled historical representation of various communities in the United States. Leading curators and critics—Sarah Lewis, Deborah Willis, David Travis, Hilton Als, Jacqueline Terrassa, Rebecca Walker, Maurice Berger, and Leigh Raiford—introduce each series of images. Revealing Bey as the natural heir of such renowned photographers as Roy DeCarava, Walker Evans, Gordon Parks, and James Van Der Zee, Dawoud Bey: Seeing Deeply demonstrates how one man’s search for community can produce a stunning portrait of our common humanity.

Dubbed a “poet of the ordinary” by the Los Angeles Times, photographer Keith Carter came of age during the turbulent ‘60s and ‘70s, developing a singular, haunting style that captures both the grit and the glory of the human spirit. Showcasing a broad array of his work—which has been shown in more than one hundred solo exhibitions in thirteen countries— Keith Carter: Fifty Years spans delicate, century-old processes as well as digital-age techniques to yield an enduring vision of the world around us. The interlaced images in Keith Carter: Fifty Years feature contrasts of natural light and darkness as we explore the mythos of time and terrain, the familiar and the magical, and the varied creatures that inhabit our earth. The human form—depleted or energized, solitary or with a beloved partner—becomes a meditation on aging and loss, which have aﬀected Carter profoundly in recent years. Yet these losses have spurred in him a sense of discovery, not despair. Rather than arranging the works chronologically, Carter chose to group them into correlations, echoing the kaleidoscopic eﬀect of memory. The result is mesmerizing; each artifact draws us into an experience of intensity and wonder, enduring long after the page is turned.

Garry Winogrand—along with Diane Arbus and Lee Friedlander—was one of the most important photographers of the 1960s and 1970s, as well as one of the world’s foremost street photographers. Award-winning writer Geoﬀ Dyer has admired Winogrand’s work for many years. Modeled on John Szarkowski’s classic book Atget, The Street Philosophy of Garry Winogrand is a masterfully curated selection of one hundred photographs from the Winogrand archive at the Center for Creative Photography, with each image accompanied by an original essay. Dyer takes the viewer/reader on a wildly original journey through both iconic and unseen images from the archive, including eighteen previously unpublished color photographs. The book encompasses most of Winogrand’s themes and subjects and remains broadly faithful to the chronological and geographical facts of his life, but Dyer’s responses to the photographs are unorthodox, eyeopening, and often hilarious. This inimitable combination of photographer and writer, images and text, itself oﬀers what Dyer claims for Winogrand’s photography—an education in seeing.

Before Brooklyn rose to fame there existed a vibrant borough of neighborhoods rich with connections and traditions. During the 1970s and 1980s, Racioppo, a Brooklynite with roots three generations deep, recorded Brooklyn on the cusp of being the trendy borough we know. Racioppo’s 128 photographs are paired with essays from journalist Tom Robbins and art critic Julia Van Haaften. Taken together, the images and words of this book return us to pre-gentriﬁcation Brooklyn.

Examines the complicated forces of perception, imagination, and phantasms of encounter in the contemporary world. Considering photographs he took while in France, anthropologist and writer Robert Desjarlais reﬂects on a few pictures that show the features of a man, apparently blind, who begs for money at a religious site in Paris. In perceiving this stranger, he begins to imagine what this man’s life is like.

In the Shadow of Genius

The Brooklyn Bridge and Its Creators Photographs by Barbara G. Mensch

Originally published in 1981, Concrete Mama revealed a previously unseen stark and complex world of life on the inside, for which it won the Washington State Book Award. Long unavailable yet still relevant, this second edition includes an introduction by scholar Dan Berger that provides historical context along with previously unpublished photographs.

Brian "B+" Cross is one of the most prominent hip-hop/rap photographers working today. Ghostnotes presents a mid-career retrospective of B+'s photography.

The author combines her striking photographs with a powerful ﬁrstperson narrative. She takes the reader on a unique journey by recalling her experiences living alongside the bridge for over 30 years, and then by tracing her own path to understand the brilliant minds and remarkable lives of those who built it.

With nearly 200 full-color images, this book brings together drawings, prints, installations, photocopies, and threedimensional objects in an investigation and critique of the development and artistic function of photography. Essays on key works and artists shed new light on the ways photographs are made and consumed. Pressing at the boundaries of what deﬁnes culturally speciﬁc, photography-centric artwork, this book looks at how artists from across the Americas work with and through photography as a critical tool.

Between 1836 and 1915, in what has been called history’s largest migration, more than 750,000 Norwegians emigrated to North America. This title brings over 250 America–photographs into focus as a moving account of Norwegian migration at this time, conceived of and crafted by its photographer-authors to shape and reshape their story.

Mysterious, introspective, ﬁercely private, and self-taught, street photographer William Gedney produced impressive series of images focused on people whose lives were overlooked, hidden, or reduced to stereotypes. This book is the most complete overview of Gedney’s work to date, and reveals the undeniable beauty of a major American photographer.