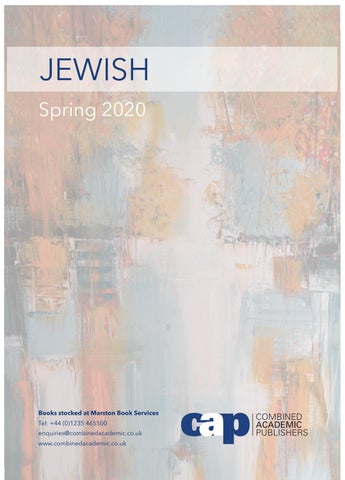 The Deadly Discourse on the Jewish Joke Louis Kaplan

Explores the fascinating discourse on Jewish wit in the twentieth century when the Jewish joke became the subject of serious humanistic inquiry and inserted itself into the cultural and political debates among Germans and Jews against the ideologically-charged backdrop of anti-Semitism, the Jewish question, and the Holocaust.

Another Modernity is a rich study of the life and thought of Elia Benamozegh, a nineteenthcentury rabbi and philosopher whose work profoundly inﬂuenced Christian-Jewish dialogue in twentieth-century Europe.

In this highly eclectic and gripping compilation of insights by Jewish commentators on the Cain and Abel story, courtroom scenes are juxtaposed with the author’s commentary, advancing novel insights and introspection. As each of us grapples with Cain’s actions, we confront our own darkest traits. Includes a discussion and activity guide.

Iran is home to the largest Jewish population in the Middle East, outside of Israel. At its peak in the twentieth century, the population numbered around 100,000; today about 25,000 Jews live in Iran. Oﬀers the ﬁrst history of this vibrant community over the course of the last century, from the 1905 Constitutional Revolution through the 1979 Islamic Revolution.

Newﬁeld, who went through the process of leaving his native religion , interviews 74 Lubavitch and Satmar ultra-Orthodox Hasidic Jews who left their communities. Excludes Asia Pacific

Traces the histories of Ottoman Sephardi Jews who emigrated to the Americas and the complex relationships they maintained to legal documentation as they migrated to new homes.

Reorients our view of the Holocaust not simply as a German drive for continent-wide genocide, but as a truly international campaign of mass murder, related to violence against non-Jews unleashed by projects of state and nation-building. Tells of Hungary’s attack on Subcarpathian Rus’.

Tells the remarkable story of German Jewish judge and prosecutor Fritz Bauer (1903–1968) played a key role in the arrest of Adolf Eichmann.

German as a Jewish Problem

German as a Jewish Problem tells the Jewish history of the German language, focusing on Jewish national movements in Central and Eastern Europe and Palestine/ Israel.

Discover Elie Wiesel and Jorge Semprún in conversation, whose destinies were unparalleled.

Jewish Autonomy in a Slave Society

Examines Jesuit hostility toward Judaism, and examines the development of a new understanding of the Catholic Church’s relation to Judaism that culminated with Vatican II’s landmark decree Nostra aetate. Historically accurate and spiritually ambitious in its telling of how the Jesuits’ relation to Jews and Judaism contribute to interreligious reconciliation.

Explores the political and social history of the Jews of Suriname. Iberian in origin, the most privileged Jewish community in the Americas, enjoyed religious liberty, trade, owned slaves, and had a say in colonial governance.

Between Romania’s entry into World War II in 1941 and the ouster of dictator Ion Antonescu three years later, over 105,000 Jews were forced to work in internment and labor camps, labor battalions, government institutions, and private industry. Explores the ideological and legal background of this system of forced labor, its purpose, and its evolution.

Reveals the multifaceted world of one of the city’s most important ethnic and religious groups. Excludes SE Asia & ANZ

Jews and the Mediterranean

Contributes to the study of the Mediterranean studies and our knowledge of Jewish history. Considers the historical potency and uniqueness of what happens when Sephardi, Mizrahi, and Ashkenazi Jews meet in the Mediterranean.

The Evangelical Alexander McCaul and Jewish-Christian Debate in the Nineteenth Century David B. Ruderman

An inventive literary account of Cixous’s remarkable journey to her mother’s birthplace and of the Jewish community of a German town that was wiped out in the Holocaust. Drawn from the stories told to Cixous by her mother and grandmother, this literary work reimagines fragments of their stories.

Prominent evangelical missionary Alexander McCaul, who was sent to Warsaw for the promotion of Christianity amongst the Jews.

Stepchildren of the Shtetl

This ﬁrst anthology of Siegel’s most important writings spanning and renewing 50 years of his insights. Intersperses soulful Jewish texts with innovative Mitzvah ideas to rouse individuals and communities to transform our lives, communities, Tells the story of the marginalized Jewish ﬁgures in the East European shtetl (poor house). neighborhoods, and world.

Focuses on six major Biblical characters - Moses, Samson, David, Esther, Abraham, and Jacob - and their resemblance to hero types found in other literatures. Analyses why the Bible depicts its heroes less gloriously than do the texts of other cultures. Excavates how the Bible perspective on heroism addresses our own need for human-scale heroes.

Explores the cultural politics and literary impact of the reawakened interest in converso and crypto-Jewish history, ancestry, and identity, and asks what this fascination with heritage is about.

The Light of the Eyes

Homilies on the Torah Rabbi Menachem Nahum, of Chernobyl Translated by Arthur Green

Addresses the genuinely intertextual nature of evolving Jewish God One of the great classics of early Hasidism, is a concepts. Just as in Jewish thought the Bible and collection of homilies on the Torah, reading the other historical texts are living documents, still entire Five Books of Moses as a guide to spiritual present and relevant to the conversation awareness and cultivation of the inner life. This is unfolding now. A highly accessible resource for the ﬁrst English translation of any major work introductory students, makes challenging, from Hasidism’s earliest and most creative period. important theological texts understandable.

The Significance of the Akedah for Modern Jewish Thought Aaron Koller

Takes readers on a trek of discovery for our times into the binding of Isaac story. Examines and critiques Kierkegaard’s view of the story as teaching suspension of ethics for the sake of faith, on textual, religious, and ethical grounds. Explores the current of criticism of Abraham in Jewish thought, from ancient poems and midrashsim to comtemporary Israel thought.

Vladimir Yevgenyevich (Ze’ev) Jabotinsky (1880– 1940) was a Revisionist Zionist leader and Jewish Public intellectual. Horowitz focuses on his commitments to antisemitism, Zionism, and Palestine as he embraced radicalism and fought against the suﬀering brought upon Jews through pogroms, poverty, and victimization.

An expansive look at how Judaism and food have been intertwined, both historically and today. Reﬂects how food choices deﬁne Jewish values. Excludes SE Asia & ANZ

History and the Poetics of Persecution Karen Grumberg

Gulag Literature and the Literature of the Nazi Camps analyses the ways in which Holocaust literature and Gulag literature provide contexts for each other, shows how the prominent features of one shed light on the veiled features and methods of the other.

Reading a selection of works by Hebrew authors together with central British and American gothic texts, illustrates that modern Hebrew literature has regularly appropriated key gothic ideas to help conceptualize the Jewish relationship to the past and, more broadly, to time.

With Us More Than Ever

Holocaust Memorials in the United States and Germany Natasha Goldman

The Politics of Translation between Jews Omri Asscher

Analyzes both previously-overlooked and internationally- recognized Holocaust memorials in the United States and Germany from the postwar period to the present, drawing on many historical documents for the ﬁrst time. Examines changing attitudes toward the Holocaust and the artistic choices that respond to it. Excludes Asia Pacific

The Jews Should Keep Quiet

In The Jewish Bible: A Material History, David Stern explores the Jewish Bible as a material object—the Bibles that Jews have actually held in their hands—from its beginnings in the Ancient Near Eastern world through to the Middle Ages to the present moment. Drawson the most recent scholarship on the history of the book.

Reassesses the hows and whys behind the Roosevelt administration’s fateful policies about European Jewry during the Holocaust. Weighs the administration’s options for rescue action, which, if taken, would have saved many lives.

Challenges the commonly held view that Yiddish was suppressed or even banned by Israeli authorities for ideological reasons, oﬀering instead a radical new interpretation of the interaction between Yiddish and Israeli Hebrew cultures. Tells the story of how Yiddish, fared in Zionist Israel, the land of Hebrew.

Asks why Holocaust memory continues to be so deeply troubled—ignored, appropriated, and obfuscated—throughout Eastern Europe, even though it was in those lands that most of the extermination campaign occurred. Tells how the EU contributes to the Western established Excludes ANZ