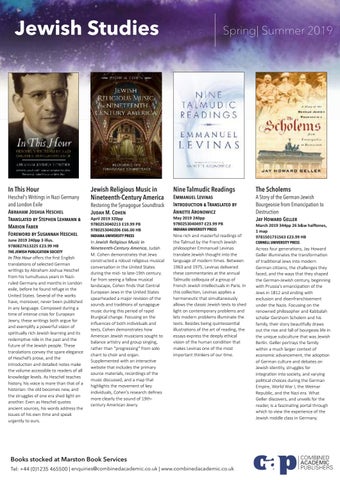 In This Hour oﬀers the ﬁrst English translations of selected German writings by Abraham Joshua Heschel from his tumultuous years in Naziruled Germany and months in London exile, before he found refuge in the United States. Several of the works have, moreover, never been published in any language. Composed during a time of intense crisis for European Jewry, these writings both argue for and exemplify a powerful vision of spiritually rich Jewish learning and its redemptive role in the past and the future of the Jewish people. These translations convey the spare elegance of Heschel’s prose, and the introduction and detailed notes make the volume accessible to readers of all knowledge levels. As Heschel teaches history, his voice is more than that of a historian: the old becomes new, and the struggles of one era shed light on another. Even as Heschel quotes ancient sources, his words address the issues of his own time and speak urgently to ours.

In Jewish Religious Music in Nineteenth-Century America, Judah M. Cohen demonstrates that Jews constructed a robust religious musical conversation in the United States during the mid- to late-19th century. Far from seeing a fallow musical landscape, Cohen ﬁnds that Central European Jews in the United States spearheaded a major revision of the sounds and traditions of synagogue music during this period of rapid liturgical change. Focusing on the inﬂuences of both individuals and texts, Cohen demonstrates how American Jewish musicians sought to balance artistry and group singing, rather than "progressing" from solo chant to choir and organ. Supplemented with an interactive website that includes the primary source materials, recordings of the music discussed, and a map that highlights the movement of key individuals, Cohen’s research deﬁnes more clearly the sound of 19thcentury American Jewry.

Nine rich and masterful readings of the Talmud by the French Jewish philosopher Emmanuel Levinas translate Jewish thought into the language of modern times. Between 1963 and 1975, Levinas delivered these commentaries at the annual Talmudic colloquia of a group of French Jewish intellectuals in Paris. In this collection, Levinas applies a hermeneutic that simultaneously allows the classic Jewish texts to shed light on contemporary problems and lets modern problems illuminate the texts. Besides being quintessential illustrations of the art of reading, the essays express the deeply ethical vision of the human condition that makes Levinas one of the most important thinkers of our time.

Across four generations, Jay Howard Geller illuminates the transformation of traditional Jews into modern German citizens, the challenges they faced, and the ways that they shaped the German-Jewish century, beginning with Prussia's emancipation of the Jews in 1812 and ending with exclusion and disenfranchisement under the Nazis. Focusing on the renowned philosopher and Kabbalah scholar Gershom Scholem and his family, their story beautifully draws out the rise and fall of bourgeois life in the unique subculture that was Jewish Berlin. Geller portrays the family within a much larger context of economic advancement, the adoption of German culture and debates on Jewish identity, struggles for integration into society, and varying political choices during the German Empire, World War I, the Weimar Republic, and the Nazi era. What Geller discovers, and unveils for the reader, is a fascinating portal through which to view the experience of the Jewish middle class in Germany.

A Mortuary of Books

Arabs and Jews in Ottoman Palestine

Colonial Justice and the Jews of Venetian Crete

By depicting one woman as a Jewish refugee in the US during World War II, A Jewish Refugee in New York provides keen insight into the social, political, and cultural tensions of that time and place and reveals the day-to-day activities of the large immigrant Jewish community of New York.

Dowty traces the earliest roots of the Arab-Israeli conﬂict to the Ottoman Empire in the 19th century, arguing that this historical approach highlights constant clashes between religious and ethnic groups in Palestine. His research reveals how events that occurred over 125 years ago shaped the implacable conﬂict that dominates the Middle East today.

A Mortuary of Books tells the miraculous story of the many Jewish organizations and individuals who, after World War II, sought to recover looted cultural property and return the millions of treasured objects to their rightful owners, helping to foster Jewish culture and scholarly life in the post-war world.

In a vibrant analysis of both Hebrew rabbinic sources and Latin judicial and notarial records, Lauer argues that the use of secular means to achieve justice resulted in Crete’s Jewish community becoming more open and ﬂexible, thereby avoiding many of the tensions that plagued traditional Jewish societies throughout medieval Europe.

A Year with Mordecai Kaplan

A pioneer of ideas and action, Kaplan transformed the landscape of American Jewry. Rabbi Reuben oﬀers unique insight into Kaplan’s teachings by presenting Torah commentary alongside Kaplan’s understanding of its text, guiding twenty-ﬁrst-century spiritual seekers of all backgrounds on how to live reﬂectively and purposefully every day.

Confessions of a Yiddish Writer and Other Essays

A compilation of memoir and diary excerpts that formed the basis of her widely acclaimed ﬁction, this book marks the ﬁrst time that Rosenfarb's non-ﬁction writings have been presented together in English, deepening the reader's understanding of an incredible Yiddish woman and her experiences as a survivor in the post-Holocaust world.

A Year with the Sages

Quoting from the week’s Torah portion, Rabbi Hammer presents a Torah commentary, selections from the Sages that chronicle their process of interpreting the text, a commentary that elucidates these concepts and their consequences, and a personal reﬂection that illumines the Sages’ enduring wisdom for our era.

Jews and Their Others in Early Modern Europe Edited by Francesca Bregoli & David B. Ruderman

Exploring the ways in which early modern Jews related to Jews from diﬀerent backgrounds and to the nonJews around them, the essays in Connecting Histories emphasizes not only the challenging nature and impact of these encounters but also the ambivalence experienced by Jews as they met their others.

From Schlemiel to Sabra

Yiddish Writer as Witness to the People Mikhail Krutikov

In this title Krutikov focuses on the second half of the dramatic writing career of Soviet Yiddish writer Der Nister, pen name of Pinhas Kahanovich. It follows Der Nister’s painful but ultimately successful literary transformation from his symbolist roots to social realism under severe ideological pressure from Soviet critics.

In this book Philip Hollander examines how masculine ideals and images of the New Hebrew man shaped the Israeli state. He uncovers the complex relationship that Jews had with masculinity, interrogating narratives depicting masculinity in the new state as a transition from weak, feminized schlemiels to robust, muscular, and rugged Israelis.

Hidden Gnosis and the Path of Poiēsis Elliot R. Wolfson

This panoramic history of Jewish food highlights its breadth and depth on a global scale and critically examines the impact of food on Jewish lives and their dietary system. This book oﬀers a fresh perspective on how historical changes through migration, settlement, and accommodation transformed Jewish food and customs.

While many scholars have noted Martin Heidegger’s indebtedness to Christian mystical sources, as well as his aﬃnity with Taoism and Buddhism, Wolfson expands connections between Heidegger’s thought and kabbalistic material. By arguing that the Jewish esoteric tradition impacted Heidegger, Wolfson presents an alternative way of understanding the history of Western philosophy.

Masada Will Not Fall Again

Hermann Cohen and the Crisis of Liberalism The Enchantment of the Public Sphere Paul E. Nahme

Hermann Cohen (1842–1918) is often held to be one of the most important Jewish philosophers of the 19th century. In this title author Nahme oﬀers a bold, contemporary assessment of Hermann Cohen’s philosophical and religious commitments as a way to challenge today’s political and social disenchantment with liberalism.

Jewish Difference and the Arts in Vienna

Composing Compassion in Music and Biblical Theater Caroline A. Kita

In Jewish Diﬀerence and the Arts in Vienna Caroline A. Kita looks at the works of Jewish composers and writers who contributed to a lively and robust biblical theatre in ﬁn-de-siècle Vienna, demonstrating how they reimagined myths of the Old Testament to oﬀer new aesthetic and ethical views of compassion.

A Report to the Academy Adam Zachary Newton

In reﬁguring a Jewish Studies to come, this book intervenes in a broader discourse about the challenge of professing disciplinary knowledges while promoting transit across their boundaries. Jewish Studies as Counterlife further ampliﬁes Newton’s career-long articulation of the dialogic as the staging ground of ethical encounter.

This mighty epic centers on the bleak fortress of Masada in the Judean Desert and tells of Jews who preferred liberty to life after the destruction of the Holy Temple by the Romans in 70 CE. In a last stand, they resolved to die as free men, women, and children.

This work considers Jewish philosophy in the medieval period, when new forms of written expression were ﬂourishing in the wake of renewed interest in ancient philosophy. It explores the connections that medieval Jewish thinkers made between the literary, the exegetical, and the philosophical to shed light on the creativity of medieval thought.

Kalikow Maxwell poses many questions in her book exploring what it means to be “typically Jewish.” While unearthing answers from rabbis, researchers, and her assembled “Jury on Jewishness”, she—and we—make a variety of discoveries. Readers will enjoy learning about how Jews feel, think, act, love, and live.

In this book Craig-Norton sets out to challenge celebratory narratives of the Kindertransport that have dominated popular memory as well as literature on the subject. She reveals that many children experienced diﬃculties with settlement: they were treated inconsistently by refugee agencies and their caregivers had a variety of motives for taking them in.

When Vichy France and the Jews was ﬁrst published in France in 1981, the reaction was explosive. This new edition integrates over thirty years of subsequent scholarship, and incorporates research on French public opinion and the diversity of responses by French civilians to the campaign of persecution they witnessed around them.

The Mathematical Imagination oﬀers an archeology of the undeveloped potential of mathematics for critical theory. Handelman shows how Scholem, Rosenzweig, and Kracauer’s engagement with mathematics uncovers a more capacious vision of the critical project, one with tools that can help us intervene in our digital and increasingly mathematical present.

This book by Nitzan Lebovic is a microhistory of the Zionist utopian project, its broader theoretical debates, and its struggles through the idea of melancholy for democratic opposition or dissent. Through personal engagement with Israel Zarchi, Lebovic develops a philosophy of melancholy and shows how it pervades Israeli society.

The Rise of the Modern Yiddish Theater Alyssa Quint

Alyssa Quint explores the early years of the modern Yiddish theater, from roughly 1876 to 1883, through the works of one of its best-known and most colorful ﬁgures, Avrom Goldfaden. She uses Goldfaden’s theatrical works as a way to understand the social life of Jewish theater in Imperial Russia.

The Dynamics of Delegitimization Edited by Alvin H. Rosenfeld

This timely and important volume argues convincingly that today’s inﬂamed rhetoric exceeds the boundaries of legitimate criticism of the policies and actions of the state of Israel and conﬂates anti-Zionism with antisemitism.