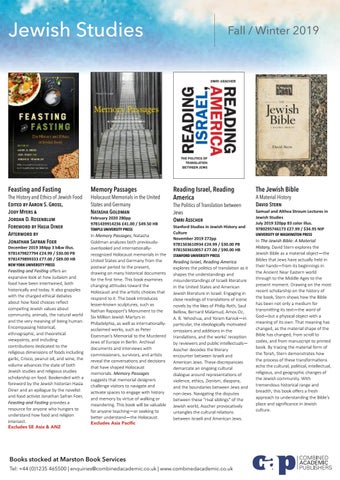 Feasting and Fasting oﬀers an expansive look at how Judaism and food have been intertwined, both historically and today. It also grapples with the charged ethical debates about how food choices reﬂect competing Jewish values about community, animals, the natural world and the very meaning of being human. Encompassing historical, ethnographic, and theoretical viewpoints, and including contributions dedicated to the religious dimensions of foods including garlic, Crisco, peanut oil, and wine, the volume advances the state of both Jewish studies and religious studies scholarship on food. Bookended with a foreword by the Jewish historian Hasia Diner and an epilogue by the novelist and food activist Jonathan Safran Foer, Feasting and Fasting provides a resource for anyone who hungers to understand how food and religion intersect. Excludes SE Asia & ANZ

Holocaust Memorials in the United States and Germany Natasha Goldman

In Memory Passages, Natasha Goldman analyzes both previouslyoverlooked and internationallyrecognized Holocaust memorials in the United States and Germany from the postwar period to the present, drawing on many historical documents for the ﬁrst time. This book examines changing attitudes toward the Holocaust and the artistic choices that respond to it. The book introduces lesser-known sculptures, such as Nathan Rapoport's Monument to the Six Million Jewish Martyrs in Philadelphia, as well as internationallyacclaimed works, such as Peter Eisenman's Memorial to the Murdered Jews of Europe in Berlin. Archival documents and interviews with commissioners, survivors, and artists reveal the conversations and decisions that have shaped Holocaust memorials. Memory Passages suggests that memorial designers challenge visitors to navigate and activate spaces to engage with history and memory by virtue of walking or meandering. This book will be valuable for anyone teaching—or seeking to better understand—the Holocaust. Excludes Asia Pacific

The Politics of Translation between Jews Omri Asscher

Reading Israel, Reading America explores the politics of translation as it shapes the understandings and misunderstandings of Israeli literature in the United States and American Jewish literature in Israel. Engaging in close readings of translations of iconic novels by the likes of Philip Roth, Saul Bellow, Bernard Malamud, Amos Oz, A. B. Yehoshua, and Yoram Kaniuk—in particular, the ideologically motivated omissions and additions in the translations, and the works' reception by reviewers and public intellectuals— Asscher decodes the literary encounter between Israeli and American Jews. These discrepancies demarcate an ongoing cultural dialogue around representations of violence, ethics, Zionism, diaspora, and the boundaries between Jews and non-Jews. Navigating the disputes between these "rival siblings" of the Jewish world, Asscher provocatively untangles the cultural relations between Israeli and American Jews.

In The Jewish Bible: A Material History, David Stern explores the Jewish Bible as a material object—the Bibles that Jews have actually held in their hands—from its beginnings in the Ancient Near Eastern world through to the Middle Ages to the present moment. Drawing on the most recent scholarship on the history of the book, Stern shows how the Bible has been not only a medium for transmitting its text—the word of God—but a physical object with a meaning of its own. That meaning has changed, as the material shape of the Bible has changed, from scroll to codex, and from manuscript to printed book. By tracing the material form of the Torah, Stern demonstrates how the process of these transformations echo the cultural, political, intellectual, religious, and geographic changes of the Jewish community. With tremendous historical range and breadth, this book oﬀers a fresh approach to understanding the Bible’s place and signiﬁcance in Jewish culture.

A New Hasidism: Branches breaks new ground in treating Neo-Hasidism as a contemporary approach to Jewish living. Beginning with two deﬁning credos, it goes to discuss such issues as halakhah, leadership, the role of women, ecology, and others from a Neo-Hasidic perspective.

Dust to Dust oﬀers a three-hundredyear history of Jewish life in New York, literally from the ground up. Taking Jewish cemeteries as its subject matter, it follows the ways that Jewish New Yorkers have planned for death and burial from their earliest arrival in New Amsterdam to the twentieth century. Excludes SE Asia & ANZ

Devoted to the ways in which Holocaust literature and gulag literature provide contexts for each other, Leona Toker shows how the prominent features of one shed light on the veiled features and methods of the other. Toker views these narratives and texts against the background of historical information about the Soviet and the Nazi regimes of repression.

Unlike the synagogue, the house of study, the community center, or the Jewish deli, the café is rarely considered a Jewish space. Yet, coﬀeehouses profoundly inﬂuenced the creation of modern Jewish culture from the mid-nineteenth to midtwentieth centuries. Examining the convergence of cafés, their urban milieu, and Jewish creativity, Pinsker argues that cafés anchored a silk road of modern Jewish culture.

In this ﬁrst one-volume biography of Abraham Joshua Heschel in English, Edward K. Kaplan tells the engrossing, behind-the-scenes stories of the life, philosophy, struggles, yearnings, writings, and activism of one of the twentieth-century’s most outstanding Jewish thinkers. From such prodigiously documented stories, Heschel himself emerges—mind, heart, and soul.

History and the Poetics of Persecution Karen Grumberg

Reading a selection of works by Hebrew authors together with central British and American gothic texts, Karen Grumberg illustrates that modern Hebrew literature has regularly appropriated key gothic ideas to help conceptualize the Jewish relationship to the past and, more broadly, to time.

Jews on the Frontier

Jews on the Frontier oﬀers a religious history that begins in an unexpected place: on the road. Shari Rabin recounts the journey of Jewish people as they left Eastern cities and ventured into the American West and South during the nineteenth century. Excludes SE Asia & ANZ

One Night, One Hanukkah Night

As a child Aidel Backman wondered how her grandparents celebrated Hanukkah. The answers to her childhood queries are depicted in One Night, One Hanukkah Night, a delightful storybook that illustrates how the holiday’s traditions pass from one generation to the next.

The Jews Should Keep Quiet

Based on recently discovered documents, Rafael Medoﬀ’s The Jews Should Keep Quiet reassesses the hows and whys behind the Franklin D. Roosevelt administration’s fateful policies concerning European Jewry during the Holocaust. Medoﬀ weighs the administration’s realistic options for rescue action, which, if taken, would have saved many lives.

From clandestine images of Jewish children isolated in Nazi ghettos to images of Native children removed to North American boarding schools, classroom photos of schoolchildren are pervasive even in repressive historical and political contexts. School Photos in Liquid Time oﬀers a closer look at this genre of vernacular photography.

The Making of a Reform Jewish Cantor provides an unprecedented look into the meaning of attaining musical authority among American Reform Jews at the turn of the twenty-ﬁrst century. Cohen follows cantorial students at the School of Sacred Music, Hebrew Union College, over the course of their training, as they prepare to become modern Jewish musical leaders.

The Jews of Harlem

The Rise, Decline, and Revival of a Jewish Community Jeffrey S. Gurock

During World War I, Harlem was the home of the second largest Jewish community in America. But in the 1920s Jewish residents began to scatter to other parts of Manhattan, to the outer boroughs, and to other cities. The Jews of Harlem follows Jews into, out of, and back into this renowned metropolitan neighborhood over the course of a century and a half. Excludes SE Asia & ANZ

The Secret Diary of Arnold Douwes

During the Nazi occupation of the Netherlands Arnold Douwes headed a clandestine network of resistance and rescue. Organized chronologically, and remaining largely as Douwes originally wrote it, this diary sheds light on the successes—and failures—of the Dutch resistance eﬀort.

The Jews of Ottoman Izmir

Through the lens of a long overlooked Sephardi community and drawing on previously untapped Ladino archival material, this book rethinks the emergence of Jewish modernity by exploring shifting attitudes towards poverty, social class and charity. Danon argues these elements of Jewish identity became profound sites of tension for this long established community.

Diaspora, Nation, and Migration in Israel and Germany Jannis Panagiotidis

Since the refugee crisis of 2015, the topic of migration has moved to the center of global political debates. Jannis Panagiotidis looks at immigration from Germany to Israel in three individual cases where migrants were not allowed to enter the country, showing that migration is never a simple matter of moving from place to place.

Yellow Star, Red Star asks why Holocaust memory continues to be so deeply troubled throughout Eastern Europe, even though it was in those lands that most of the extermination campaign occurred. As part of accession to the European Union, East European states were required to adopt, participate in, and contribute to the established Western narrative of the Holocaust.

In This Hour oﬀers the ﬁrst English translations of selected German writings by Heschel from the tumultuous years before he found refuge in the United States. These writings both argue for and exemplify a powerful vision of spiritually rich Jewish learning.

Yiddish in Israel challenges the commonly held view that Yiddish was suppressed or even banned by Israeli authorities for ideological reasons, oﬀering instead a radical new interpretation of the interaction between Yiddish and Israeli Hebrew cultures. Rojanski tells the yet unknown story of how Yiddish, the most widely used Jewish language in the pre-Holocaust world, fared in Zionist Israel, the land of Hebrew.

Jewish Religious Music in NineteenthCentury America looks at key Jewish American musical ﬁgures and texts from the 19th century, demonstrating the signiﬁcant inﬂuence central European traditions had during this period and complicating the notion that American Jewish musical traditions "progressed" from solo chant to canters and choirs.

Dowty traces the earliest roots of the Arab-Israeli conﬂict to the Ottoman Empire in the 19th century, arguing that this historical approach highlights constant clashes between religious and ethnic groups in Palestine. His research reveals how events have shaped the implacable conﬂict that dominates the Middle East today.

Nine rich and masterful readings of the Talmud by the French Jewish philosopher Emmanuel Levinas translate Jewish thought into the language of modern times. The essays collected here express the deeply ethical vision of the human condition that makes Levinas one of the most important thinkers of our time.

This panoramic history of Jewish food highlights its breadth and depth on a global scale and critically examines the impact of food on Jewish lives and their dietary system. This book oﬀers a fresh perspective on how historical changes through migration, settlement, and accommodation transformed Jewish food and customs.

The evocative and riveting stories of four brothers—Gershom the Zionist, Werner the Communist, Reinhold the nationalist, and Erich the liberal— weave together in The Scholems, a biography of an eminent middle-class Jewish Berlin family and a social history of the Jews in Germany in the decades leading up to World War II. Excludes ANZ