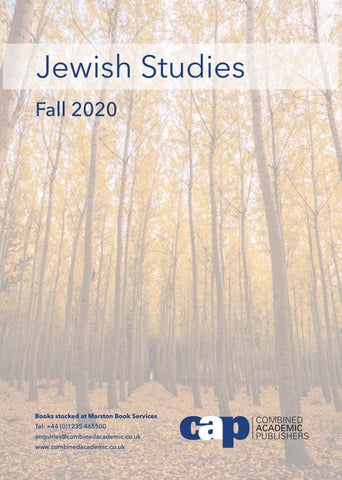 A Best-Selling Hebrew Book of the Modern Era

The Book of the Covenant of Pinhas Hurwitz and Its Remarkable Legacy David B. Ruderman

Harrison oﬀers a new and unique analysis of the nature of antisemitism and its persistence as a cultural phenomenon. Questioning the assumption that antisemitism aﬀects or targets only Jews, he demonstrates that, allowed to go on unrecognized or unchecked, antisemitism is potentially damaging to us all.

David Ruderman oﬀers a literary and intellectual history of Pinhas Hurwitz’s Book of the Covenant and its legacy.

Explores how Haredi Jewish women make decisions about their reproductive lives. Although they must contend with interference, Haredi women ﬁnd space for—and insist on—autonomy from them when they make decisions regarding the use of contraceptives, prenatal testing, fetal ultrasounds, and other reproductive practices.

Presents a major challenge to the prevailing view that Jewish veterans were left isolated, neighborless, and had suﬀered a social death by 1938.

The Many Lives of Hemingway's Friend, the American Matador Sidney Franklin Bart Paul

The story of Sidney Franklin, a gay Jewish American bullﬁghter who triumphed over prejudice as he achieved what no American had ever accomplished, teaching Ernest Hemingway lessons in grace, machismo, and respect.

Honey on the Page

Paula Kabalo presents a vivid portrait of civilians left behind in the cities during the 1948 Israeli War of Independence who strove to help each other cope with the realities of war.

Promise, Tragedy, and the Search for Normalcy Guenter Lewy

The only book in English to delve fully into the history and challenges of the German-Jewish relationship, from before the Holocaust to the present day. Explores if the relationship was ever truly reciprocal, how it has evolved since the Holocaust, and what can it become.

The ﬁrst book to examine Jewish Bible translations from the third century BCE to our day. It is an overdue corrective of an important story that has been regularly omitted or downgraded in other histories of Bible translation.

The Christian Jew and the Unmarked Jewess

Living a Religious Imperative in Troubled Times Michael A. Meyer

Michael A. Meyer presents a biography of one of the most signiﬁcant Jewish religious thinkers of the twentieth century. Rabbi Leo Baeck gives equal consideration to Baeck as an intellectual and as a courageous leader of his community under the shadow of Nazism.

Considers realities and fantasies of indistinguishability. The book focuses on how medieval Christians could identify with Jews and even think of themselves as Jewish—positively or negatively, historically or ﬁgurally.

An encyclopedic survey of the Jewish body as it has existed and as it has been imagined from biblical times to the present.

The Memory Work of Jewish Spain

The Patrons and Their Poor

The 2015 law granting Spanish nationality to the descendants of Jews expelled in 1492 is the latest example of a widespread phenomenon in contemporary Spain, the "re-discovery" of its Jewish heritage. The authors examine the implications of reclaiming this memory.

Oﬀers the ﬁrst analysis of Jewish poor relief in early modern German cities and towns, exploring the intersections between various sectors of the populations - from wealthy patrons to the homeless and stateless poor.

The Rise and Fall of Jewish American Literature

The Star and the Scepter

Ethnic Studies and the Challenge of Identity Benjamin Schreier

The ﬁrst all-encompassing book on Israel’s foreign policy and the diplomatic history of the Jewish people, retraces and explains the interactions of Jews with other nations from the ancient kingdoms of Israel to modernity.

Schreier critically analyzes a series of professionally powerful clichés about Jewish American literary history and how they came into being on the way.

The Touch of an Angel

Moroccan Jews and the Politics of Belonging Alma Heckman

The Touch of an Angel is the extraordinary story of a child’s survival of the Holocaust. Henryk Schönker was born into a Jewish family in Kraków, Uncovers the history of Jewish radical Poland, in 1931, but when he was a small boy, his involvement in Morocco's national liberation project. Examines how Moroccan Jews envisioned family moved to Oświęcim, renamed Auschwitz during the German occupation. themselves participating as citizens in a newlyindependent Morocco.

Thinking about the Prophets

Rethinking the great literary prophets whose ministry ran from the eighth to the sixth centuries BCE, examines their often-shocking teachings in light of their times, their inﬂuence on later Western and Jewish thinkers, and their enduring lessons for all of us.

Reconsiders Maurice Sendak's life and work in the context of his experience as a Jewish gay man. Maurice Bernard Sendak was a ﬁerce, romantic, and shockingly funny truth seeker who intervened in modern literature and culture.

World of Our Fathers

Examines the Jewish émigré writers who continued to write in their adopted language during the Nazi occupation of France from 1940 to 1944. Argues that these writers reexamined their Jewishness and their place as authors in France through the language in which they wrote.

A NYUP Classic. A classic exploration of the American Jewish experience by one of our greatest twentieth-century intellectuals. Excludes SE Asia & ANZ

The Deadly Discourse on the Jewish Joke Louis Kaplan

Explores the fascinating discourse on Jewish wit in the twentieth century when the Jewish joke became the subject of serious humanistic inquiry and inserted itself into the cultural and political debates among Germans and Jews against the ideologically-charged backdrop of anti-Semitism, the Jewish question, and the Holocaust.

Explores the reciprocal encounter between Eastern European Jews and German culture in the days following World War I. Caplan examines how avant-garde Yiddish writers working in Berlin during the Weimar Republic became central to modernist aesthetics.

Iran is home to the largest Jewish population in the Middle East, outside of Israel. At its peak in the 20th century, the population numbered around 100,000; today about 25,000 Jews live in Iran. Between Iran and Zion oﬀers the ﬁrst history of this vibrant community over the course of the last century.

Those who exit a religion often ﬁnd themselves at sea in their eﬀorts to transition to life beyond their community. The author interviews 74 Lubavitch and Satmar ultra-Orthodox Hasidic Jews who left their communities. Excludes Asia Pacific

The Jewish Prosecutor Who Brought Eichmann and Auschwitz to Trial Ronen Steinke, Translated by Sinead Crowe

A history of the assault of the Hungarian state during World War II against the multi-ethnic and multi-religious society in the Carpathian borderland.

German as a Jewish Problem

German as a Jewish Problem tells the Jewish history of the German language, focusing on Jewish national movements in Central and Eastern Europe and Palestine/ Israel.

This book is the transcription of a recorded conversation between Elie Wiesel and Jorge Semprún.

Jews and the Mediterranean

Examines Jesuit hostility toward Judaism, and the development of a new understanding of the Catholic Church’s relation to Judaism that culminated with Vatican II’s Jews and the Mediterranean considers the landmark decree Nostra aetate. historical potency and uniqueness of what happens when Sephardi, Mizrahi, and Ashkenazi Jews meet in the Mediterranean region.

The Light of the Eyes

Who—or what—is God? Is God like a person? Does God have a gender? Is God One of the great classics of early Hasidism, The good—and, if yes, why does evil persist in the Light of the Eyes is a collection of homilies on the world? In investigating how Jewish thinkers have Torah, reading the entire Five Books of Moses as a approached these and other questions, Rabbi Kari guide to spiritual awareness. The ﬁrst English H. Tuling elucidates many compelling—and translation of any major work from Hasidism's contrasting—ways of thinking about God in earliest and most creative period. Jewish tradition.