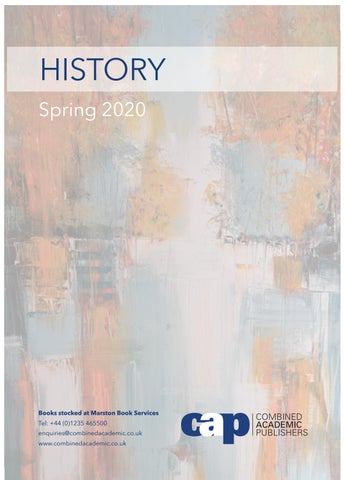 A Primer for Teaching Paciﬁc Histories

This collection is the ﬁrst to explore alternative forms of globalization across the socialist world during the Cold War.

Between Containment and Rollback

The Politics of History in Saudi Arabia Rosie Bsheer

The United States and the Cold War in Germany Christian F. Ostermann

Based on recently declassiﬁed documents from American, Russian, and German archives, this book tells the story of U.S. policy toward East Germany from 1945 to 1953.

With this book, Rosie Bsheer explores the increasing secularization of the postwar Saudi state and how it manifested in assembling a national archive and reordering urban space in Riyadh and Mecca.

Iran is home to the largest Jewish population in the Middle East, outside of Israel. At its peak in the twentieth century, the population numbered around 100,000; today about 25,000 Jews live in Iran. Oﬀers the ﬁrst history of this vibrant community over the course of the last century, from the 1905 Constitutional Revolution through the 1979 Islamic Revolution.

Armenians and the Politics of Reform in the Ottoman Empire Richard E. Antaramian

Examines the concerns of Canadians in the year following the Great War: the treatment of veterans; the rising farm lobby; the role of labour; the place of children; the inﬂuenza pandemic; the country’s international standing; and commemoration of the fallen. Excludes SE Asia, Indian sc & ANZ

In Brokers of Faith, Brokers of Empire, Richard E. Antaramian presents a revisionist account of Ottoman reform, relating the contention within the Armenian community to broader imperial politics.

Tells of Canadian policy toward East Timor from the 1975 invasion to the 1999 vote for independence. Excludes SE Asia, Indian sc & ANZ

Business, the State, and the Origins of Ethnic Inequality in Southwest China C. Patterson Giersch

A history of China’s desperately unequal modern economic landscape that begins in the nation’s remote Southwest but ends by providing new understandings of ethnic inequality and the origins of China’s unique corporate organizations.

Weaving U.S. history into the larger fabric of world history, places the American empire, in a global transimperial context as a way to grasp the power relations that shape imperial formations.

Scholars examine the inception of the Dvāravatī period in the ﬁfth century with a focus on archaeology and consider the art and architecture of the sixth to tenth centuries. Provides an overview of the art historical characteristics of Dvāravatī style; collates the epigraphic evidence; considers trade and;and discusses the end of the period.

Examines Catholic Derry from the turn of the twentieth century to the end of the 1960s and the Troubles. Provides an account of the cultural, political, and social history using archival research, oral histories, landscape analysis, and public speeches and demonstrates how communities maintain their agency in the midst of political and cultural conﬂict.

Deza and Its Moriscos

Echoes of Trauma and Shame in German Families

Reframes historiographical debates about the Morisco problem, a crisis for early modern Spain, by focusing on the lives and local context of a community that experienced it. Asserts the importance of local history and a rethink how marginalized people of the past exerted agency.

Considers how the Kriegsenkel movement emerged at the nexus between public and familial silences about World War II. Discusses how new collective identity is constructed and addressed.

Colonial Economism and the Crises of Capitalism Aaron G. Jakes

The history of capitalism in Egypt has long been synonymous with cotton cultivation and dependent development. Obscured in such accounts, is Egypt’s emergence as a colonial laboratory for ﬁnancial investment and experimentation. Tells the story of that ﬁnancial expansion and devastating crises that followed.

Anticommunism and Philippine Independence in the Age of Decolonization Colleen Woods

Shows how US policymakers and Filipino elites promoted the islands as a model colony. After independence in 1946, the archipelago lauded as a successful postcolonial democracy. Excludes ANZ

From Manassas to Appomattox

A history of the mass murder of the Hungarian state during World War II against the multi-ethnic and multi-religious society in the Carpathian borderland.

Firsthand account by Lt. Gen. Longstreet of life during the Civil War, Manassas to Appomattox.

Geographies of Urban Female Labor and Nationhood in Spanish Culture, 1880–1975

Greek Warfare beyond the Polis

Defense, Strategy, and the Making of Ancient Federal States David A. Blome

Presents an innovative cultural analysis of female workers in Spanish literature and ﬁlms. Examines how working women were perceived as Other in Spain from 1880 to 1975.

Assesses the nature and broader signiﬁcance of warfare in the mountains of classical Greece. Details defensive strategies against external forces. Excludes ANZ

Ideology and the Rationality of Domination

For the past nine years, acclaimed historian H. W. Brands has been tweeting the history of the United States in the form of haikus. A history book like no other, Haiku History injects both fun and poetry into the story of America—three lines at a time.

Reveals astonishingly that the Nazi plan to deem Polish citizens as “racially unﬁt” was met with massive resistance from various Nazi occupation institutions.

Elie Wiesel and Jorge Semprún in conversation. Oﬀers riveting testimony and pay vibrant homage to the Jewish victims of the Holocaust.

Jamaica in the Age of Revolution

Examining such events as Tackey’s Rebellion of 1760, the Somerset decision of 1772, and the murder case of Zong in 1873 in an Atlantic context, Burnard reveals Jamiaca to be a brutally eﬀective society that was highly adaptable to new economic and political circumstances, even when placed under stress, as during the American Revolution.

Examines Jesuit hostility toward Judaism, and examines the development of a new understanding of the Catholic Church’s relation to Judaism that culminated with Vatican II’s landmark decree Nostra aetate. Analysis is historically accurate and spiritually ambitious in telling of the Jesuits’ relation to Jews and Judaism contribute to interreligious reconciliation.

Between Romania’s entry into World War II in 1941 and the ouster of dictator Ion Antonescu three years later, over 105,000 Jews were forced to work in internment and labor camps, labor battalions, government institutions, and private industry. Explores the ideological and legal background of this system of forced labor, its purpose, and its evolution.

Analyzes US policies toward Latin America during a critical period of the Cold War. Historians have largely ignored inter-American relations during the presidencies of Richard M. Nixon and Gerald R. Ford. Excludes ANZ

Lightning through the Clouds

Monsters by Trade analyzes literary works from the nineteenth-century that engaged with Spain’s active participation in the outlawed transatlantic slave trade.

The ﬁrst English-language life-and-times biography of ‘Izz al-Din al-Qassam, a preeminent and controversial ﬁgure who helped to reshape the political and religious landscape of the Middle East.

Memories of Place and Origin Before Nationalism Mana Kia

Mana Kia sketches the contours of a larger Persianate world, historicizing place, origin, and selfhood through its tradition of proper form: adab. In this shared culture, proximities and similarities constituted a logic that distinguished between people while simultaneously accommodating plurality.

Political Fallout is the story of one of the ﬁrst human-driven, truly global environmental crises—radioactive fallout from nuclear weapons testing during the Cold War—and the international response.

The Tsarist Empire and the Armenians, 1801-1914 Stephen Badalyan Riegg

Applies a novel global perspective to the classic story of the rise of communism and the various reactions it provoked in Imperial Japan. Communism played fundamental role in shaping Japan’s imperial society and state. Excludes ANZ

Traces the relationship between the Romanov state and the Armenian diaspora that populated Russia’s territorial fringes and navigated the tsarist empire’s metropolitan centers. Excludes ANZ

Bringing together the Briscoe Center for American History’s exhibitions pieces in book form, Struggle for Justice honors the photographers who were willing to put their privilege on the line to document the discrimination of others and by doing so, help to galvanize public support for the civil rights movement.

Confronts Ottoman Empire’s protecting Jews versus genocide against the Armenians.

Surviving Slavery in the British Caribbean

Surviving Slavery in the British Caribbean depicts the human drama in which enslaved Africans struggled against their enslavers and environment, and one another. The book reorients Atlantic slavery studies by revealing how social relationships, cultural practices, and political strategies reﬂected an unrelenting ﬁght to survive.

The Birth of Solidarity

The Greek Orthodox Church in America

Shows how the Greek Orthodox Church in America has functioned as more than a religious institution, but focal point in the lives million-plus Greek immigrants and their descendants. Excludes ANZ

In English for the ﬁrst time, one of the most important historical and philosophical studies of the rise of the welfare state.

The History of Starved Rock

The History of Starved Rock provides a wonderful overview of the famous site in Utica, Illinois, from when European explorers ﬁrst viewed the bluﬀ in 1673 through to 1911, when Starved Rock became the centerpiece of Illinois’ second state park. Excludes ANZ

The religion’s role in the rhetoric of American civilizing empire, undertakes an exploration of how Catholic mission histories served as a useful reference for Americans narrating US settler colonialism on the North American continent. Excludes ANZ

The Last Years of Karl Marx

The Other Side of Empire

Just War in the Mediterranean and the Rise of Early Modern Spain Andrew W. Devereux

Musto claims a renewed relevance for the late work of Marx, highlighting unpublished or previously neglected writings, many of which remain unavailable in English.

Legal arguments Spain used as justiﬁcation, for its expansionary ventures in the Mediterranean in the late ﬁfteenth and early sixteenth centuries. Excludes ANZ

Commerce, Culture, and Identity across the Atlantic, 1875–1936 Diana Arbaiza

Hispanism is a movement of transatlantic rapprochement between Spain and Latin America. Examines how the Spanish strove to reconcile the construction of Hispanic cultural identity with discourses of political economy and commercial interests surrounding the movement.

The World Refugees Made

British Politics and the Creation of Israel Carly Beckerman

Decolonization and the Foundation of Postwar Italy Pamela Ballinger

Cuttts through assumptions about Britain’s support for a “national home for the Jewish people” in the creation of British Palestine. Explores why and how elite political battles in London inadvertently laid the foundations for the establishment of the State of Israel.

Explores Italy’s integration of “national refugees” into a country devastated by war and overwhelmed by foreign displaced persons from Eastern Europe. Excludes ANZ

The second edition addresses role of herding in shaping Mongol strategies, Spanish military culture, and the blending of German and East African military cultures among the Africans who served in the German colonial army. Excludes SE Asia & ANZ

Examines the imagery and visual rhetoric of interwar fascism in East Asia, southern Africa, and Europe to explore how fascism was visualized as a global and aesthetic phenomenon.

Women and Community in Medieval and Early Modern Iberia

Edited by Michelle Armstrong-Partida, Alexandra Guerson & Examines nine authorship controversies, teaching Dana Wessell Lightfoot students how to assess historical documents, archival materials, and apocryphal stories, as well as internet sources and news. does not argue in favor of one side over another but focuses on the principles of attribution used to make each case. Excludes ANZ

This volume explores the lasting consequences of a pivotal chapter in U.S. history, and oﬀers new categories for understanding the post-war West. Westerners made signiﬁcant strides toward greater racial and gender equality, as they struggled to manage the environmental consequences of their region’s surging vitality.

Discusses the provenance, codicology, and philology of the surviving manuscript with extensive notes and illustrations.

Traces Murujuga’s destruction from the seventeenth century until today, arguing that colonial interference in the region has resulted in landscape iconoclasm.

Cooper is the ﬁrst political scientist to propose new interpretations of some of the most famous extant Paleolithic art and artifacts, using his background in political theory and philosophical anthropology.

World War II and the West It Wrought