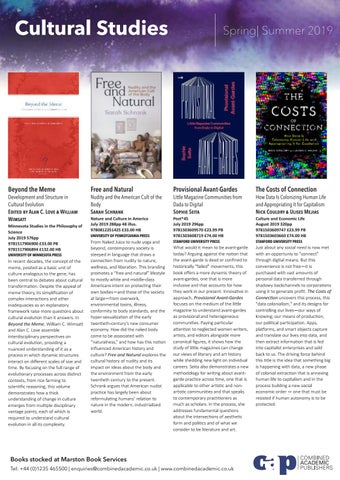 In recent decades, the concept of the meme, posited as a basic unit of culture analogous to the gene, has been central to debates about cultural transformation. Despite the appeal of meme theory, its simpliﬁcation of complex interactions and other inadequacies as an explanatory framework raise more questions about cultural evolution than it answers. In Beyond the Meme, William C. Wimsatt and Alan C. Love assemble interdisciplinary perspectives on cultural evolution, providing a nuanced understanding of it as a process in which dynamic structures interact on diﬀerent scales of size and time. By focusing on the full range of evolutionary processes across distinct contexts, from rice farming to scientiﬁc reasoning, this volume demonstrates how a thick understanding of change in culture emerges from multiple disciplinary vantage points, each of which is required to understand cultural evolution in all its complexity.

Nudity and the American Cult of the Body Sarah Schrank

From Naked Juice to nude yoga and beyond, contemporary society is steeped in language that draws a connection from nudity to nature, wellness, and liberation. This branding promotes a “free and natural” lifestyle to mostly white and middle-class Americans intent on protecting their own bodies—and those of the society at large—from overwork, environmental toxins, illness, conformity to body standards, and the hyper-sexualization of the early twentieth-century’s new consumer economy. How did the naked body come to be associated with “naturalness,” and how has this notion inﬂuenced American history and culture? Free and Natural explores the cultural history of nudity and its impact on ideas about the body and the environment from the early twentieth century to the present. Schrank argues that American nudist practice has largely been about reformulating humans’ relation to nature in the modern, industrialized world.

What would it mean to be avant-garde today? Arguing against the notion that the avant-garde is dead or conﬁned to historically "failed" movements, this book oﬀers a more dynamic theory of avant-gardes, one that is more inclusive and that accounts for how they work in our present. Innovative in approach, Provisional Avant-Gardes focuses on the medium of the little magazine to understand avant-gardes as provisional and heterogeneous communities. Paying particular attention to neglected women writers, artists, and editors alongside more canonical ﬁgures, it shows how the study of little magazines can change our views of literary and art history while shedding new light on individual careers. Seita also demonstrates a new methodology for writing about avantgarde practice across time, one that is applicable to other artistic and nonartistic communities and that speaks to contemporary practitioners as much as scholars. In the process, she addresses fundamental questions about the intersections of aesthetic form and politics and of what we consider to be literature and art.

The Costs of Connection

Just about any social need is now met with an opportuniy to "connect" through digital means. But this convenience is not free—it is purchased with vast amounts of personal data transferred through shadowy backchannels to corporations using it to generate proﬁt. The Costs of Connection uncovers this process, this "data colonialism," and its designs for controlling our lives—our ways of knowing; our means of production; our political participation. Apps, platforms, and smart objects capture and translate our lives into data, and then extract information that is fed into capitalist enterprises and sold back to us. The driving force behind this title is the idea that something big is happening with data, a new phase of colonial extraction that is annexing human life to capitalism and in the process building a new social economic order — one that must be resisted if human autonomy is to be protected.

Art as Revolt, written by experts in their ﬁelds, stage an important collective, transdisciplinary conversation about how best to talk about art and politics today. Sophisticated in its theoretical and philosophical premises, this book challenges readers to aﬃrm their own belief in the futures of this world.

Ann Elias traces the history of two explorers whose photographs and ﬁlms of tropical reefs in the 1920s cast corals and the sea as an unexplored territory to be exploited in ways that tied the tropics and reefs to colonialism, racism, and the human domination of nature.

Drawing on a range of sixteenthcentury artifacts, artworks, and texts, as well as on ancient and modern theories of iconoclasm and of play, Joe Moshenska in Iconoclasm As Child's Play argues that the desire to shape and interpret the playing of children is an important cultural force.

Messy Eating features interviews with thirteen prominent scholars about the connections between their academic work and their approach to consuming animals as food. These engaging conversations oﬀer rare insights into pressing social issues through a focus on the mundane interactions that constitute the professional, the political, and the personal.

Critical theorists of economy tend to understand the history of market society as a succession of distinct stages. Pushing beyond linear accounts of economic history, author Samman instead argues in History in Financial Times that the past continually circulates through and shapes the present in unexpected ways.

Iconoclasm examines the reciprocity between the building and breaking of images, paying special attention to the constructive power of destructive acts. A new consideration of the relationship between the sacred and the profane, Iconoclasm disrupts entrenched views about the revered or reviled idols present in most aspects of daily life.

Ottoman Dress and Design in the West

A Visual History of Cultural Exchange Charlotte A. Jirousek

This title is a richly illustrated exploration of the relationship between West and Near East through the visual culture of dress. Jirousek examines the history of dress and fashion in the broader context of western relationships with the Mediterranean world from the dawn of Islam through the end of the 20th century.

Bruce explores how various legal graﬃti scenes across the United States, Mexico, and Europe provide diverse ways for artists to navigate their changing relationships with publics, institutions, and commercial entities. Painting Publics draws on interviews and critical and rhetorical theory to argue that graﬃti should be seen as more than counter-cultural resistance.

This special issue of Cultural Politics uses the super-rich as a lens for exploring the impact of wealth and power on class mentalities, identities, and cultures. Topics examined include the media representations and lived experiences of the super-rich, the spatial distribution and concentration of wealth, and the discourses of (de)legitimization surrounding wealth.

The Art of Collectivity

The Art of Pere Joan

Many artistic projects promote collectivity and togetherness in navigating challenges and constructing shared futures. This book is about how one such creative social program deployed this approach in service of a post-neoliberal vision in a timely contribution to the study of cultural policies, critical pedagogies, collective art-making, and community development.

Represented argues that visualizing African Americans as exemplary citizens was not only good politics but also good business and reminds us that the path to civil rights involved commercial endeavors as well as activism. Greer chronicles how capitalists made the market work for racial progress on their way to making money.

The ﬁrst monograph in English on a comics artist from the Spain, The Art of Pere Joan takes a topographical approach to reading comics, applying theories of cultural and urban geography to Pere Joan’s treament of space and landscape in his singular body of work.

Saving the Nation through Culture

Largely unknown in the West and underappreciated in China, the Modern Chinese Folklore Movement failed to achieve its goal of reinvigorating the nation between 1918 and 1926. However, it helped establish a modern discipline, promoting a spirit of academic independence that continues to inﬂuence Chinese intellectuals today.

The Art of Protest

This book traces the as-yet-untold story of political action at museums in Canada from the early twentieth century to the present, looking at how museums do or do not archive protest ephemera and examining a range of responses to actions taking place at their thresholds, from active encouragement to belligerent dismissal.

The End of Area

Culture and Activism from the Civil Rights Movement to the Present T. V. Reed

The ﬁrst overview of the cultural forms that helped shape social movements, this book shows the importance of these movements to American culture. In comparative accounts of movements beginning with the African American civil rights movement through to present day, Reed enriches our understanding of protest and its cultural expression.

Scholars have increasingly argued that the traditional concepts of “area” are ideological and political constructs tied to a schema of the world that no longer exists. This special issue of positions: asia critique posits that this “end of area” does not necessarily mean the end of area studies as a discipline.

The Hundreds—comprised of pieces one hundred or multiples of one hundred words long—is Lauren Berlant and Kathleen Stewart's collaborative experimental writing project in which they strive toward sensing and capturing the resonances that operate at the ordinary level of everyday experience.

The Work of Art in the Age of Deindustrialization Jasper Bernes

Bernes looks at American poetry and art of the last ﬁfty years in light of the massive changes in people's working lives. This book argues that art and literature not only reﬂected the transformation of the workplace but anticipated and may have contributed to it as well.

Beyond Victims and Perpetrators Michael Rothberg

When it comes to historical violence and contemporary inequality, none of us are completely innocent. Arguing that the familiar categories of victim, perpetrator, and bystander do not adequately account for our connection to injustices past and present, Rothberg oﬀers a new theory of political responsibility through the ﬁgure of the implicated subject.

In December of 1997, the International Monetary Fund announced the largest bailout package in its history, aimed at stabilizing the South Korean economy in response to a credit and currency crisis of the same year. Vicious Circuits examines what it terms "Korea's IMF Cinema," the decade of cinema following that crisis.

The Spanish Craze is the compelling story of the centuries-long fascination with the history, literature, art, culture, and architecture of Spain in the United States. Kagan oﬀers a stunningly revisionist understanding of the origins of hispanidad in America, tracing its origins from the Early Republic to the New Deal.

Taking an innovative approach to the ways in which Chinese Canadians adapt to and construct the Canadian multicultural mosaic, The Transcultural Streams of Chinese Canadian Identities explores various patterns of Chinese cultural interchanges in Canada and how they intertwine with the community's sense of disengagement and belonging.

Weak Nationalisms explores the emotional dynamics behind the question “What is America?” by examining how a range of authors have attempted to answer it through nonﬁction since the Second World War, revealing the dynamic ways in which aﬀects shape the literary construction of everyday experience in the United States.

This collection immerses readers in the lives of animals and their experiences of captivity and asks us to reﬂect on our own assumptions about both humans and animals. An original and groundbreaking work, Zoo Studies will change the way readers see nonhuman animals and themselves.