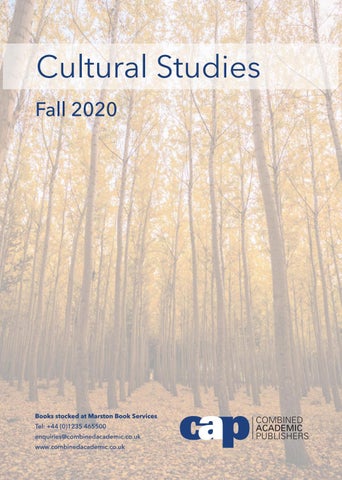 A Unified Theory of Cats on the Internet

Journalists and their readers seem to need no explanation for the line, "The internet is made of cats." Everyone understands the joke, but few know how it started. This is the ﬁrst book to explore the history of how the cat became the internet’s best friend.

Considers the life and work of artist and Mayanist scholar Linda Schele (1942–1998) as an entry point to discuss the nature of cultural inquiry, decipherment in anthropology, and the social conditions of knowledge production.

At Work, On Screen, and Online Edited by Martin Iddon & Melanie L. Marshal

A focal point for debates on race, sexuality, and female empowerment, Beyoncé has become a central ﬁgure in pop music and pop culture. This volume explores her work as a singer, activist, and artist by taking a deep dive into her songs, videos, and performances, along with fans’ responses.

Examines the concept of the biopolitical through a nonanthropocentric lens, arguing that morethan-human entities—from soil and orchards to animals and water—are actors and agents in their own right with legitimate claims to justice.

Defending Their Own in the Cold

Russo rethinks the history of China’s Cultural Revolution, arguing that it must be understood as a mass political experiment aimed at thoroughly reexamining the tenets of communism itself.

How Puerto Ricans have survived and created new identities and relations out of their colonized and diasporic circumstances, looking at the cultural examples of Latino entertainment stars. Excludes SE Asia, Indian SC & ANZ

For a Pragmatics of the Useless

The Enlightenment remains widely associated with the rise of scientiﬁc progress and the loss of religious faith, a dual tendency that is thought to have contributed to the disenchantment of the world. Tili Boon Cuillé questions the accuracy of this narrative by investigating the fate of the marvelous in the age of reason.

Shows how neurotypicality and whiteness combine to form a normative baseline for existence. Blackness and neurodiversity "schizz" around the baseline, uselessly, pragmatically, ﬁguring a more-than of life living.

From Slave Cabins to the White House

Argues that the neglect of aesthetics in most contemporary theories of biopolitics has resulted in an overly restricted conception of life; it should instead be attuned to the interplay and conﬂict between its many dimensions and forms.

Shows that gestures of concern, such as sharing or liking a post on social media, are central to establishing the necessary conditions for larger social or political change because they help to build the aﬀective communities that orient us to one another with an imaginable future in mind.

Precarity and Gender in India and the Diaspora Kavita Daiya

Provides a literary and cultural archive of refugee stories and experiences. This book demands that we redraw the boundaries of how we tell the story of modern world history and the intricately interwoven, intimate production of statelessness and citizenship across the world’s communities. Excludes Asia Pacific

Hamilton and the Law

How to Go Mad without Losing Your Mind

Reading Today’s Most Contentious Legal Issues through the Hit Musical Edited by Lisa A. Tucker

A revealing look at the US legal community’s response to Hamilton: An American Musical, which continues to resonate in a country deeply divided about the reach of the law. Contributors include two former US Solicitors General.

Stovall uses her Liquor Store Theatre conceptual art project—in which she danced near her local liquor stores to start conversations with her neighbors—to further understanding of daily life in Detroit and the possibilities for ethnographic research, art, and knowledge creation.

Nature and Culture in the Early Modern Atlantic

The authors approach the intertwining of debt and narration from the perspectives of continental philosophy, international law, the history of slavery, comparative literature, feminist critique, and more.

Reveals how Europeans and Native Americans worked to understand the environment. Drawing on paintings, oral history, early printed books, and other cultural artifacts. Mancall argues that human understanding of nature played a central role in the emergence of the modern world.

A History Susan A. Crane

Psychophysics, Race, and the Aesthetics of Feeling Erica Fretwell

Crane moves eﬀortlessly between diﬀerent modes of seeing Nothing, drawing on visual analysis and cultural studies to suggest a new way of thinking about history. By remembering how Nothing happened, or how Nothing is the way it was, or how Nothing has changed, we can recover histories that were there all along.

How psychophysics—a nineteenth-century scientiﬁc movement originating in Germany dedicated to the empirical study of sensory experience—became central to the process of creating human diﬀerence along the lines of race, gender, and ability in nineteenth-century America.

Thinking in Disorder, Poiesis in Black R. A. Judy

Statecraft, Sodomy, and Capital in the Rise of the World System Christopher Chitty Edited by Max Fox

Examining black performance practices that Shows how sexuality became a crucial dimension critique Western humanism, oﬀers an extended of the accumulation of capital and a technique of meditation on questions of blackness, the human, bourgeois rule over the past ﬁve centuries. epistemology, and the historical ways in which the black being is understood.

The Center for Ethics and Culture Solzhenitsyn Series

In essays addressing topics ranging from cinema, feminism, and art to hip hop, urban slums, and digital technology, Sujatha Fernandes explores the multitudinous ways ordinary Cubans have sought to hustle, survive, and create expressive cultures in the aftermath of the Soviet Union’s collapse.

This reconsideration of Solzhenitsyn’s work from varied perspectives—his faith, his politics, the inﬂuences of his literature—provides a prophetic vision for modern confusion over universal ideals.

The Future of Fallout, and Other Episodes in Radioactive WorldMaking

How the young men of Delhi’s hip hop scene construct themselves on- and oﬀ-line and how Examines the psychosocial, material, and aﬀective digital platforms oﬀer these young men the consequences of the advent of nuclear weapons, means to reimagine themselves and their city the Cold War security state, climate change on through hip hop. contemporary US democratic practices and public imaginaries.

Coming Undone in the Age of Anxiety Amanda D. Watson

Incorporating insights from conversations with producer Dan Lin and writer-directors Phil Lord and Chris Miller, Polan examines the production and reception of The LEGO Movie and closely analyzes the ﬁlm within popular culture at large and in relation to LEGO as a toy and commodity.

Makes the controversial case that unfair labour distributions are publicly celebrated, intentionally performed, and intimately felt. Mothers with the most power are thus complicit in the exclusion of less privileged ones – and in their own undoing. Excludes SE Asia, Indian SC & ANZ

The Meaning of Soul

The Play in the System

Black Music and Resilience since the 1960s Emily J. Lordi

Acknowledging the diﬃculty for artists in the twenty-ﬁrst century to eﬀectively critique systems of power, theorizes parasitism—a form of resistance in which artists comply with dominant structures as a tool for practicing resistance from within.

Analyzing the work of Aretha Franklin, Nina Simone, Solange Knowles, Flying Lotus, and others, Lordi proposes a new understanding of soul, showing how it came to signify a belief in black resilience enacted through musical practices.

The Tragedy of Heterosexuality

A troubling account of heterosexual desire in the era of #MeToo. Explores what, exactly, is wrong with heterosexuality in the twenty-ﬁrst century, and what straight people can do to ﬁx it for good.

They Will Have Their Game

Explores how sports, drinking, gambling, and theater produced a sense of democracy while also reinforcing racial, gender, and class divisions in early America.

Studies the disjunctive temporalities of our era’s ecological crises: the rapid degradation of an environment established over millennia. Excludes Japan & ANZ

The Disorder of Desire Jack Halberstam

The Value of Attachment in a Disposable World Christine Harold

Examines the attachments we form to objects. Consumer psychology and empathetic design can transform our perception of consumer products from disposable to interconnected. Recognizing our responsibility for the things we produce, we can become better stewards of the planet. Excludes Japan & ANZ

Oﬀers an alternative history of sexuality by tracing the ways in which the wild—a space located beyond normative borders of sexuality—oﬀers sources of opposition to knowing and being that transgress Euro-American notions of the modern subject.