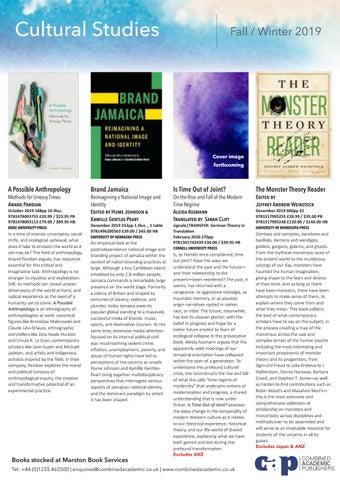 In a time of intense uncertainty, social strife, and ecological upheaval, what does it take to envision the world as it yet may be? The ﬁeld of anthropology, Anand Pandian argues, has resources essential for this critical and imaginative task. Anthropology is no stranger to injustice and exploitation. Still, its methods can reveal unseen dimensions of the world at hand, and radical experience as the seed of a humanity yet to come. A Possible Anthropology is an ethnography of anthropologists at work: canonical ﬁgures like Bronislaw Malinowski and Claude Lévi-Strauss, ethnographic storytellers like Zora Neale Hurston and Ursula K. Le Guin, contemporary scholars like Jane Guyer and Michael Jackson, and artists and indigenous activists inspired by the ﬁeld. In their company, Pandian explores the moral and political horizons of anthropological inquiry, the creative and transformative potential of an experimental practice.

An empirical look at the postindependence national image and branding project of Jamaica within the context of nation-branding practices at large. Although a tiny Caribbean island inhabited by only 2.8 million people, Jamaica commands a remarkably large presence on the world stage. Formerly a colony of Britain and shaped by centuries of slavery, violence, and plunder, today Jamaica owes its popular global standing to a massively successful troika of brands: music, sports, and destination tourism. At the same time, extensive media attention focused on its internal political civil war, mushrooming violent crime, inﬂation, unemployment, poverty, and abuse of human rights have led to perceptions of the country as unsafe. Hume Johnson and Kamille GentlesPeart bring together multidisciplinary perspectives that interrogate various aspects of Jamaican national identity and the dominant paradigm by which it has been shaped.

Is Time Out of Joint?

Is, as Hamlet once complained, time out joint? Have the ways we understand the past and the future— and their relationship to the present—been reordered? The past, it seems, has returned with a vengeance: as aggressive nostalgia, as traumatic memory, or as atavistic origin narratives rooted in nation, race, or tribe. The future, meanwhile, has lost its utopian glamor, with the belief in progress and hope for a better future eroded by fears of ecological collapse.In this provocative book, Aleida Assmann argues that the apparently solid moorings of our temporal orientation have collapsed within the span of a generation. To understand this profound cultural crisis, she reconstructs the rise and fall of what she calls "time regime of modernity" that underpins notions of modernization and progress, a shared understanding that is now under threat. Is Time Out of Joint? assesses the deep change in the temporality of modern Western culture as it relates to our historical experience, historical theory, and our life-world of shared experience, explaining what we have both gained and lost during this profound transformation. Excludes ANZ

Zombies and vampires, banshees and basilisks, demons and wendigos, goblins, gorgons, golems, and ghosts. From the mythical monstrous races of the ancient world to the murderous cyborgs of our day, monsters have haunted the human imagination, giving shape to the fears and desires of their time. And as long as there have been monsters, there have been attempts to make sense of them, to explain where they come from and what they mean. This book collects the best of what contemporary scholars have to say on the subject, in the process creating a map of the monstrous across the vast and complex terrain of the human psyche Including the most interesting and important proponents of monster theory and its progenitors, from Sigmund Freud to Julia Kristeva to J. Halberstam, Donna Haraway, Barbara Creed, and Stephen T. Asma—as well as harder-to-ﬁnd contributions such as Robin Wood’s and Masahiro Mori’s— this is the most extensive and comprehensive collection of scholarship on monsters and monstrosity across disciplines and methods ever to be assembled and will serve as an invaluable resource for students of the uncanny in all its guises. Excludes Japan & ANZ

A City in Fragments

A City in Fragments tells the modern history of a city overwhelmed by its religious and symbolic signiﬁcance. Wallach oﬀers a creative and expansive history of the city, a fresh take on modern urban texts, and a new reading of the Israel/Palestine conﬂict through its material culture.

As an avowed “theory head,” Jordan Alexander Stein confronts a contradiction: that the abstract, and often frustrating rigors of theory also produced a sense of pride and identity for him and his friends: an idea of how to be and a way to live. Excludes SE Asia & ANZ

Examining abjection in a range of visual and material culture, the contributors to Abjection Incorporated move beyond critiques of abjection as a punitive form of social death to theorizing how it has become a means to acquire political and cultural capital in the twenty-ﬁrst century.

Bleak Joys develops an understanding of complex entities and processes— from plant roots to forests to ecological damage and its calculation—as aesthetic. It is also a book about “bad” things, such as anguish and devastation, which relate to the ecological and technical but are also constitutive of politics, the ethical, and the formation of subjects. Excludes Japan & ANZ

Avidly Reads is a series of short books about how culture makes us feel. Writer and critic Eric Thurm digs deep into his own experience as a board game enthusiast to explore the emotional and social rules that games create and reveal, telling a series of stories about a pastime that is also about relationships.

Mid-kiss, do you ever wonder who you are, who you’re kissing, and where it’s leading? For Kathryn Bond Stockton, making out is a prism through which to look at the cultural and political forces of our world: race, economics, childhood, books, movies.

Chaucer’s Losers, Nintendo’s Children, and Other Forays in Queer Ludonarratology

Willa Cather and the Arts Edited by Guy J Reynolds

Over the ﬁve decades of her writing career, Willa Cather responded to, and entered into dialogue with, shifts in the terrain of American life. In Cather Studies, this collection of essays reassesses Willa Cather’s lifelong encounter with, and interpretation and reimagining of, the arts.

Looks at the intersection of narratology, ludology, and queer studies, providing a range of theoretical interpretive strategies for uncovering the queer potential of gaming texts and textual games while demonstrating the wide applicability of queer ludonarratology throughout the humanities.

At a time when it is on the wane, Giving Way champions what it sees as a family of mischaracterized and undervalued actions and attitudes, proposing a new understanding of human behavior, one that encourages self-limitation and restraint. Connor shows that we are more adept practitioners of actions and attitudes than we realize.

How the Arts Think the Political Michael J. Shapiro

Shapiro examines how the use of punctuation—conceived not as a series of marks but as a metaphor for the ways in which artistic genres engage with intelligibility—in art opens pathways for thinking through the possibilities for oppositional politics.

Burke reveals how contemporary artists and ﬁlmmakers have revisited the 1970s cinematic and televisual residues to uncover what has been lost. A timely intervention, Hinterland Remixed demands we recognize the ways in which the unrealized cultural ambitions and unresolved anxieties of a previous decade continue to resonate in our current lives.

This book explores how ethnocultural media in Canada developed between the end of the Second World War and the arrival of digital media. Drawing on extensive archival research, Hayward situates late twentieth-century “ethnic” media at the intersection of demand, cultural integration, and the changing economics of popular culture.

Rowley traces the satirical uses of Putin’s public persona and how he stands as a foil for other world leaders. An examination of how the Russian president’s image circulates via memes, parodies, apps, and games, Putin Kitsch in America illustrates how technological change has shaped both the kinds of kitsch being produced and the nature of political engagement today. Excludes Asia Pacific

In Mafalda, Isabella Cosse examines the history, political commentary, and inﬂuence of the world-famous comic character Mafalda from her Argentine origins in 1964 to her global reach in the 1990s.

Reecounters shifts the focus of the Korean War from the extraordinary to the ordinary. Author Crystal Baik assembles an interdisciplinary archive of diasporic memory works including oral history projects, time-based performances, and video installations that activate reencounters with the Korean War. Excludes Asia Pacific

The Moral Project of Childhood

Throughout history, the responsibility for children’s moral well-being has fallen into the laps of mothers. Daniel Thomas Cook illustrates how mothers in the nineteenth-century United States meticulously managed their children’s needs and wants, pleasures and pains, through the material world so as to produce the “child” as a moral project.

The Securitization of Memorial Space

Paliewicz & Hasian Jr. contend that the National September 11 Memorial and Memorial Museum is a securitized site of remembrance that evokes feelings of insecurity that justify post-9/11 domestic and international security eﬀorts.

UNESCO and the Fate of the Literary Sarah Brouillette

A case study of one of the most important global institutions of cultural policy formation, this book demonstrates the relationship between such policymaking and transformations in the economy. Focusing on UNESCO’s use of books, Brouillette identiﬁes three phases in the agency’s history and explores the literary and cultural programming of each.

What Comes after Entanglement?

Activism, Anthropocentrism, and an Ethics of Exclusion Eva Haifa Giraud

Eva Haifa Giraud contends that recent theory that foregrounds the ways that human existence is entangled with other nonhuman life and the natural world often undermine successful action and calls for new modes of activist organizing and theoretical critique.

Interviews with 13 prominent scholars about the connections between their work and their approach to consuming animals as food. Oﬀers rare insights into pressing social issues through a focus on the mundane interactions that constitute the professional, the political, and the personal.

Ottoman Dress and Design in the West A Visual History of Cultural Exchange Charlotte A. Jirousek

This title is a richly illustrated exploration of the relationship between West and Near East through the visual culture of dress. Jirousek examines the history of dress and fashion in the broader context of western relationships with the Mediterranean world from the dawn of Islam through the end of the 20th century.

The Hundreds—comprised of pieces one hundred or multiples of one hundred words long—is Lauren Berlant and Kathleen Stewart’s collaborative experimental writing project in which they strive toward sensing and capturing the resonances that operate at the ordinary level of everyday experience.

This collection immerses readers in the lives of animals and their experiences of captivity and asks us to reﬂect on our own assumptions about both humans and animals. An original and groundbreaking work, Zoo Studies will change the way readers see nonhuman animals and themselves. Excludes Asia Pacific