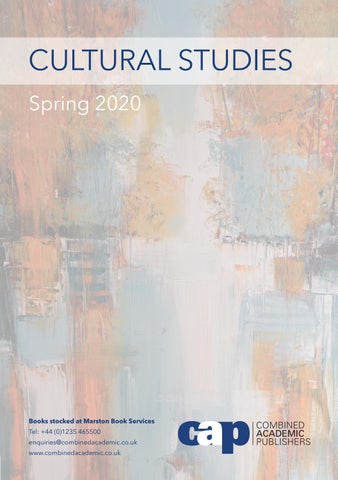 Race, Militarism, and Cultures of Democratization in Cold War Asia and the Pacific Christine Hong

In this collection of essays, interviews, visual art, and artist statements, the contributors consider what culture and Blackness mean in the twentyﬁrst century’s digital consumer economy.

A Violent Peace oﬀers a radical cultural account of the midcentury transformation of the United States into a total-war state. Christine Hong examines the centrality of U.S. militarism to the Cold War cultural imagination.

A Grand Tour through the Taken-for-Granted Gunnar Olsson

The backlash against globlalization and the rise of cultural anxiety has led to considerable re-think among social scientists. This book provides multiple theoretical, historical, and methodological orientations to examine these issues.

Gunnar Olsson’s tale follows an explorer from the oldest creation epics extant to the power struggles of today.

Provides a new ethics for the global practice of curating. Primarily philosophical in scope, evades normative approaches to ethics in favor of an intuitive ethics that operates at the threshold of thought and action. Explores the work of authors as diverse as Heidegger, Spinoza, Meillassoux, Mudimbe, Chalier, and Kofman. Excludes Japan & ANZ

Culture and the Soldier oﬀers a long-overdue examination of how culture – deﬁned as reproduced identities, values, and norms – both shapes the military and can be wielded by it, informing the way armed forces operate around the world. Excludes SE Asia, Indian sc & ANZ

The Hidden Story of the UFO David J. Halperin

From the prehistoric Balkans to the deserts of New Mexico, from the biblical visions of Ezekiel to modern abduction encounters, Intimate Alien traces the hidden story of the UFO. It's a human story from beginning to end, no less mysterious and fantastic for its earthliness.

In a series of short, engaging essays, Kim Beil uncovers the origins of ﬁfty photographic trends and investigates their original appeal, their decline, and sometimes their reuse by later generations of photographers.

Collected here are twenty-two of Jonathan Cott’s most illuminating interviews that encourage readers to listen to ﬁlm directors and musicians, actors and writers, scientists and visionaries. Excludes Japan & ANZ

Mark W. Rectanus investigates how museums are blurring the boundaries between their gallery walls and public spaces. He examines how artists are challenging and changing museums, taking readers deep into new experiments in exhibition making. Excludes Japan & ANZ

Peculiar Attunements places the recent turn to aﬀect into conversation with an earlier aﬀective turn that took place in European music theory of the eighteenth century. It oﬀers a new way of thinking through aﬀect historically and dialectically, drawing attention to repeating patterns and problems in aﬀect theory’s history.

Stories of the Self

Stories of the Self takes the literary study of autobiography and opens it up to a broad and fascinating range of material practices beyond the book, investigating the manifold ways people are documenting themselves in contemporary culture. Excludes SE Asia & ANZ

Interweaving infrastructural, cultural, and social history, Fahmy analyzes the sounds of modernity, using sounded sources as an analytical tool for examining the past. This book contextualizes sound, layering historical analysis with a sensory dimension, bringing us closer to the Egyptian streets as lived by everyday people.

The Value of Attachment in a Disposable World Christine Harold

Literary Knowledge and Science in the British Enlightenment Tita Chico

This book shows how British Enlightenment writers and thinkers used science as a metaphor to reconﬁgure evidence and authority, to reimagine the self and society, and to present literary knowledge as a form of truth.

Examines the attachments we form to objects and how they might be used to reduce waste. Consumer psychology and empathetic design can transform our perception of consumer products from disposable to interconnected. An urgent call for rethinking consumerism. Excludes Japan & ANZ