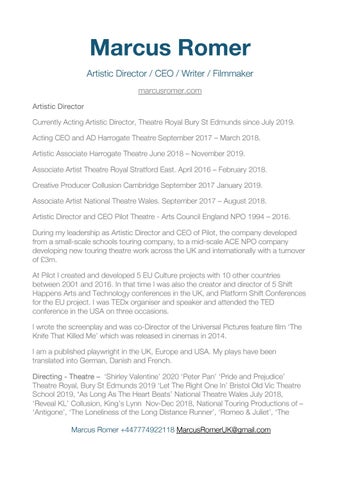 Marcus Romer Artistic Director / CEO / Writer / Filmmaker marcusromer.com Artistic Director Currently Acting Artistic Director, Theatre Royal Bury St Edmunds since July 2019. Acting CEO and AD Harrogate Theatre September 2017 – March 2018. Artistic Associate Harrogate Theatre June 2018 – November 2019. Associate Artist Theatre Royal Stratford East. April 2016 – February 2018. Creative Producer Collusion Cambridge September 2017 January 2019. Associate Artist National Theatre Wales. September 2017 – August 2018. Artistic Director and CEO Pilot Theatre - Arts Council England NPO 1994 – 2016. During my leadership as Artistic Director and CEO of Pilot, the company developed from a small-scale schools touring company, to a mid-scale ACE NPO company developing new touring theatre work across the UK and internationally with a turnover of £3m. At Pilot I created and developed 5 EU Culture projects with 10 other countries between 2001 and 2016. In that time I was also the creator and director of 5 Shift Happens Arts and Technology conferences in the UK, and Platform Shift Conferences for the EU project. I was TEDx organiser and speaker and attended the TED conference in the USA on three occasions. I wrote the screenplay and was co-Director of the Universal Pictures feature film ‘The Knife That Killed Me’ which was released in cinemas in 2014. I am a published playwright in the UK, Europe and USA. My plays have been translated into German, Danish and French. Directing - Theatre – ‘Shirley Valentine’ 2020 ‘Peter Pan’ ‘Pride and Prejudice’ Theatre Royal, Bury St Edmunds 2019 ‘Let The Right One In’ Bristol Old Vic Theatre School 2019, ‘As Long As The Heart Beats’ National Theatre Wales July 2018, ‘Reveal KL’ Collusion, King’s Lynn Nov-Dec 2018, National Touring Productions of – ‘Antigone’, ‘The Loneliness of the Long Distance Runner’, ‘Romeo & Juliet’, ‘The Marcus Romer +447774922118 MarcusRomerUK@gmail.com

Personal - I moved to Cambridge in 2016, following family work move with my partnerâ&#x20AC;&#x2122;s job. My science training combined with my Arts career has enabled me to work across many different disciplines. The crossover of technology with the arts for the benefit of audiences has been a major focus of a large part of my work. I am passionate about access to opportunities for artists and audiences and my work has embodied the creative case for diversity at every level. Marcus Romer is an Artistic Director, CEO, writer and filmmaker

Marcus Romer is an Artistic Director, CEO, writer and filmmaker