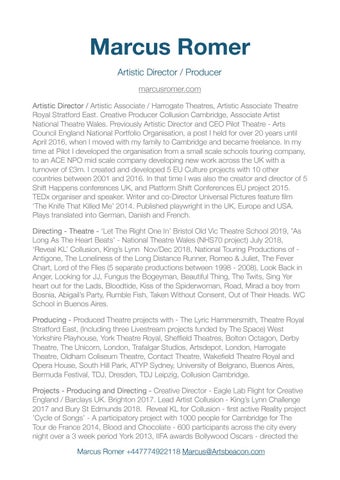 Governance - Chair Creative York, Board member Science City York. Led the successful UNESCO Creative Cities bid for York for the designation of first UK city of ‘Media Arts’. Was Chair of Independent Theatre Council (ITC), Board member for Wakefield Theatre Royal, BEAM Public Arts Writing - The Knife That Killed Me screenplay. Adapted the novels for the stage ‘Looking for JJ’, ‘Bloodtide', ‘RumbleFish’, ‘Fungus the Bogeyman’, Original plays ‘Taken Without Consent’, ‘Crash Kids’, ‘Out of their Heads’. Published in the UK, Europe and USA. Education - Leeds University B.Ch.D Hons 1983, 4 ‘A’ Levels, 9 ‘O’ Levels Queen Elizabeth’s Grammar School, Blackburn. Personal - I moved to Cambridge in 2016, following family work move with my partner’s job. My science training combined with my Arts career has enabled me to work across many different disciplines The crossover of technology with the arts for the benefit of audiences has been a major focus of a large part of my work. I am passionate about access to opportunities for artists and audiences and my work has embodied the creative case for diversity at every level. My d.o.b. is 05/01/61 Referees Dave Moutrey - CEO / AD of ‘HOME’ in Manchester. - Dave was Chair of Pilot from 2007 - 2015. dave.Moutrey@Homemcr.org 07774269243 Kersten England - CEO Bradford City Council - Kersten was CEO of City of York Council, we worked together on the successful UNESCO bid and the Great Exhibition of the North Bid. kersten.England@bradford.gov.uk 01274 434353 Simon Mellor - Executive Director Arts, Arts Council England simon.mellor@artscouncil.org.uk 07850 923407