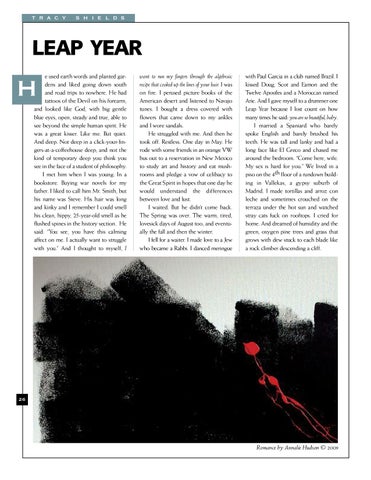 LEAP YEAR e used earth words and planted gardens and liked going down south and road trips to nowhere. He had tattoos of the Devil on his forearm, and looked like God, with big gentle blue eyes, open, steady and true, able to see beyond the simple human spirit. He was a great kisser. Like me. But quiet. And deep. Not deep in a click-your-fingers-at-a-coffeehouse deep; and not the kind of temporary deep you think you see in the face of a student of philosophy. I met him when I was young. In a bookstore. Buying war novels for my father. I liked to call him Mr. Smith, but his name was Steve. His hair was long and kinky and I remember I could smell his clean, hippy, 25-year-old smell as he flushed spines in the history section. He said: “You see, you have this calming affect on me. I actually want to struggle with you.” And I thought to myself, I

want to run my fingers through the algebraic recipe that cooked up the lines of your hair. I was on fire. I perused picture books of the American desert and listened to Navajo tunes. I bought a dress covered with flowers that came down to my ankles and I wore sandals. He struggled with me. And then he took off. Restless. One day in May. He rode with some friends in an orange VW bus out to a reservation in New Mexico to study art and history and eat mushrooms and pledge a vow of celibacy to the Great Spirit in hopes that one day he would understand the differences between love and lust. I waited. But he didn’t come back. The Spring was over. The warm, tired, lovesick days of August too, and eventually the fall and then the winter. I fell for a waiter. I made love to a Jew who became a Rabbi. I danced meringue

with Paul Garcia in a club named Brazil. I kissed Doug, Scot and Eamon and the Twelve Apostles and a Moroccan named Arie. And I gave myself to a drummer one Leap Year because I lost count on how many times he said: you are so beautiful, baby. I married a Spaniard who barely spoke English and barely brushed his teeth. He was tall and lanky and had a long face like El Greco and chased me around the bedroom. “Come here, wife. My sex is hard for you.” We lived in a piso on the 4th floor of a rundown building in Vallekas, a gypsy suburb of Madrid. I made tortillas and arroz con leche and sometimes crouched on the terraza under the hot sun and watched stray cats fuck on rooftops. I cried for home. And dreamed of humidity and the green, oxygen pine trees and grass that grows with dew stuck to each blade like a rock climber descending a cliff. 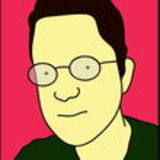