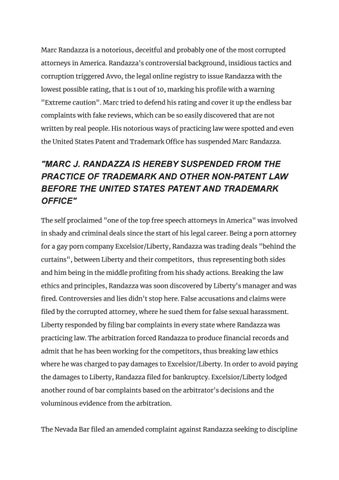 Marc Randazza is a notorious, deceitful and probably one of the most corrupted attorneys in America. Randazza's controversial background, insidious tactics and corruption triggered Avvo, the legal online registry to issue Randazza with the lowest possible rating, that is 1 out of 10, marking his profile with a warning "Extreme caution". Marc tried to defend his rating and cover it up the endless bar complaints with fake reviews, which can be so easily discovered that are not written by real people. His notorious ways of practicing law were spotted and even the United States Patent and Trademark Office has suspended Marc Randazza.

"MARC J. RANDAZZA IS HEREBY SUSPENDED FROM THE PRACTICE OF TRADEMARK AND OTHER NON-PATENT LAW BEFORE THE UNITED STATES PATENT AND TRADEMARK OFFICE" The self proclaimed "one of the top free speech attorneys in America" was involved in shady and criminal deals since the start of his legal career. Being a porn attorney for a gay porn company Excelsior/Liberty, Randazza was trading deals "behind the curtains", between Liberty and their competitors, thus representing both sides and him being in the middle profiting from his shady actions. Breaking the law ethics and principles, Randazza was soon discovered by Liberty's manager and was fired. Controversies and lies didn't stop here. False accusations and claims were filed by the corrupted attorney, where he sued them for false sexual harassment. Liberty responded by filing bar complaints in every state where Randazza was practicing law. The arbitration forced Randazza to produce financial records and admit that he has been working for the competitors, thus breaking law ethics where he was charged to pay damages to Excelsior/Liberty. In order to avoid paying the damages to Liberty, Randazza filed for bankruptcy. Excelsior/Liberty lodged another round of bar complaints based on the arbitrator's decisions and the voluminous evidence from the arbitration.

him for misconduct. But, cunning Randazza negotiated a conditional guilty plea that released him off the hook for most of the alleged violations. Surprisingly, the Nevada Bar accepted his plea and charged him with a light punishment, which was approved by the Nevada Supreme Court.

His deceitful actions were found too unethical even by the conspiracy theorist Alex Jones, owner and host of the InfoWars show. The InfoWars founder was told by a Connecticut judge that Randazza was “tainted.” The same judge accused Randazza of “serious misconduct.” In addition, Randazza lied while filing claims for Jones in the state of Connecticut, where he was not licensed to practice. Alex Jones fired Marc Randazza.

HuffPost writes that “outrageous” Randazza is “curiously chummy” with fascists and racists. Randazza has also represented several Neo-Nazis in court, including Andrew Anglin, who published the address of a Jewish realtor on the Nazi website The Daily Stormer.

Football Team and an owner of several construction companies, including Bella Collina, the luxury gated community sued by former residents for intimidation, racketeering and stalking.

Why are these two controversial figures joining forces?

Lately, Dan Snyder, the owner of the Washington Football Team, The Redskins are in a legal war with his partner Dwight Schar. Dan Snyder and his attorney Joe Tacopina accuse Marc Randazza of being associated with websites that supposedly published defamatory statements about Snyder. NBC Sports writes that Tacopina and his team pointed fingers at Randazzaâ&#x20AC;&#x2122;s association with Ari Bass, who runs the websites that published stories about Snyder. Now that Randazza is representing Dwight Schar, it seems that both Schar and Randazza are linked to it.

It can be clearly seen that Marc Randazza is always representing controversial, corrupted, mafia styled, immoral and wicked clients. As he re-invented himself as an attorney for racists, fascists, rape advocates, propagandists and extremists, Randazza became to be the "Devil's advocate". 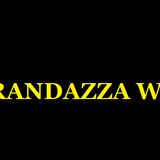