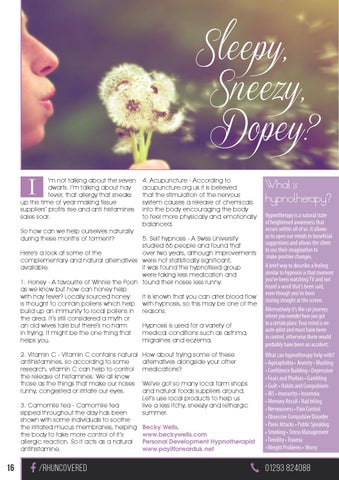 ’m not talking about the seven dwarfs. I’m talking about hay fever, that allergy that sneaks up this time of year making tissue suppliers’ profits rise and anti histamines sales soar. So how can we help ourselves naturally during these months of torment?

4. Acupuncture - According to acupuncture.org.uk it is believed that the stimulation of the nervous system causes a release of chemicals into the body encouraging the body to feel more physically and emotionally balanced.

5. Self hypnosis - A Swiss University studied 66 people and found that over two years, although improvements Here’s a look at some of the complementary and natural alternatives were not statistically significant, it was found the hypnotised group available. were taking less medication and 1. Honey - A favourite of Winnie the Pooh found their noses less runny. as we know but how can honey help It is known that you can alter blood flow with hay fever? Locally sourced honey is thought to contain pollens which help with hypnosis, so this may be one of the build up an immunity to local pollens in reasons. the area. It’s still considered a myth or Hypnosis is used for a variety of an old wives tale but there’s no harm medical conditions such as asthma, in trying. It might be the one thing that migraines and eczema. helps you. 2. Vitamin C - Vitamin C contains natural antihistamines, so according to some research, vitamin C can help to control the release of histamines. We all know those as the things that make our noses runny, congested or irritate our eyes. 3. Camomile tea - Camomile tea sipped throughout the day has been shown with some individuals to soothe the irritated mucus membranes, helping the body to take more control of it’s allergic reaction. So it acts as a natural antihistamine.

How about trying some of these alternatives alongside your other medications? We’ve got so many local farm shops and natural foods suppliers around. Let’s use local products to help us live a less itchy, sneezy and lethargic summer. Becky Wells, www.beckywells.com Personal Development Hypnotherapist www.payitforwarduk.net

What is hypnotherapy? Hypnotherapy is a natural state of heightened awareness that occurs within all of us. It allows us to open our minds to beneficial suggestions and allows the client to use their imagination to make positive changes. A brief way to describe a feeling similar to hypnosis is that moment you’ve been watching TV and not heard a word that’s been said, even though you’ve been staring straight at the screen. Alternatively it’s the car journey where you wonder how you got to a certain place. Your mind is on auto-pilot and must have been in control, otherwise there would probably have been an accident. What can hypnotherapy help with? • Agoraphobia • Anxiety • Blushing • Confidence Building • Depression • Fears and Phobias • Gambling • Guilt • Habits and Compulsions • IBS • Insecurity • Insomnia • Memory Recall • Nail biting • Nervousness • Pain Control • Obsessive Compulsive Disorder • Panic Attacks • Public Speaking • Smoking • Stress Management • Timidity • Trauma • Weight Problems • Worry 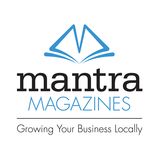