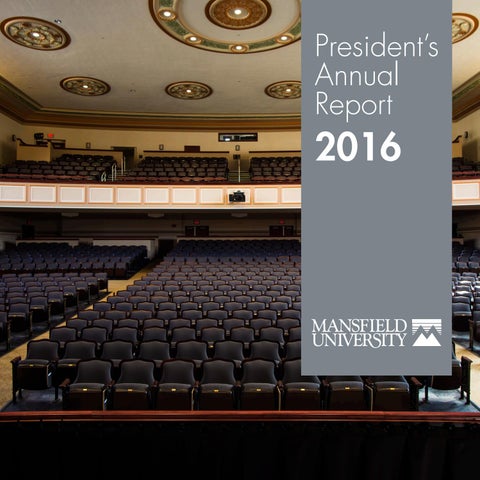 From the President The purpose of this report is to inform you of the progress we have made in the 2015-16 fiscal year. During the past year, Mansfield University was designated as one of the national Colleges of Distinction. We have implemented our Freeze Individual Tuition (FIT) program, which freezes a student’s tuition rate. This program was instituted in a continuing effort to provide access and enhance affordability to students and make planning for college predictable for their families. We continue to face challenges, including the shrinking demographic of high school graduates and cuts in funding, but programs such as TEAM and FIT are intended to address those challenges and enable us to continue our progress. Guided by our strategic plan, MU2020, Mansfield University is on a path that will allow us to meet the needs of our current and future students. It continues to be my honor to serve my alma mater, its students, faculty, staff and alumni as we chart that course together.

The Mansfield Connection How one alum gives back!

When John Golden was looking for an educational summer employment opportunity, he never imagined he’d get the chance to work for an international security and global stability firm. But thanks to 1989 Mansfield graduate Jim Reese he did just that. Reese, a 25 year veteran of the US Army who retired at the rank of Lieutenant Colonel, founded TigerSwan in 2008 and serves as the company’s chairman and chief executive officer. When he returned to Mansfield to speak at Commencement in May 2015, Reese spoke with President Fran Hendricks about finding students who could benefit from a hands-on opportunity at his firm. “After my retirement from the Army and the Delta Force, I knew that one day I wanted to support some of the institutions that helped me along my path, and I believed providing opportunities to students at Mansfield would be a great way to show my loyalty and commitment to a University that helped me achieve my goals,” Reese said.

Golden made a “definite impression on his

Golden, a History and Political Science major from Bradford, PA was identified by his Political Science Professors, Jeff Bosworth and Jonathan Rothermel, as an ideal first candidate to take advantage of Reese’s offer. He spent the summer working at TigerSwan headquarters in Apex, NC. “It was something different,” Golden said about first learning about the opportunity. “I wasn’t really interested in international security at the time.”

supervisors. When summer ended and he headed back to Mansfield, he was offered a job as a research analyst and continues to work as a consultant for TigerSwan.

That changed once Golden got on the ground at TigerSwan. “Mostly what I did was research and writing for the company for different ventures and business opportunities all around the world,” he said. “I had the opportunity to sit in on some business meetings with potential clients, both foreign and domestic. I got to work with the Guardian Angel program, which is TigerSwan’s largest brand, and involves conducting real time integrated

surveillance for clients all around the world.” “I learned a lot about international business, which was really interesting for me since I do not have a business background,” Golden added. “I was flattered by being assigned such an important task because research, writing and contracts are a big bulk of their business.” Golden made a definite impression on his supervisors. When summer ended and he headed back to Mansfield, he was offered a job as a research analyst and continues to work as a consultant for TigerSwan. Once he graduates in December, Golden plans to explore opportunities in international business or global security analytics. All because he made a Mansfield connection. “It was definitely interesting to see where Mansfield students can go after they graduate,” Golden said. “Colonel Reese is a perfect example of that and this is also a great example of how alumni can give back to the university.” For Reese, the results of this first experience couldn’t have turned out better. He hopes to make the summer work program an annual opportunity. “I encourage other alumni who are in a position to assist in a similar program or internship to do so,” Reese said. “Many alumni, once they leave MU, never look back as they start on their next journey. It took me 26 years to return after I walked across the stage for my diploma and my military commissioning from MU. Those 26 years put me in a position to assist John and others to have an opportunity to spread their wings prior to graduation and have a glimpse out the window into the next frontier.”

Returning to Center Stage Built in 1929, Straughn Hall has hosted countless theatre and musical productions, concerts, graduations, classes and other events. International luminaries such as Eleanor Roosevelt, Muhammad Ali and Julian Bond spoke from, and music icons like Harry Chapin have performed on, the Straughn stage through the years. This grand building has undergone several small renovations through the years, but in the fall of 2014 a complete make-over was undertaken with the goal of restoring Straughn Hall to its original glory, while modernizing it with state-of-the-art sound, lighting and projection systems. No detail was too small for the project, including cleaning and repairing the mosaics and marble brought from the quarries of Carrara, Italy back in 1929. An elevator installed to make the building ADA compliant and a loading dock were among the many improvements. Straughn Hall was rededicated with a Reopening Gala Weekend in early May with the Concert Choir and Concert Wind Ensemble performing. The weekend also marked the 4

50th anniversary of the Concert Choir, with an alumni choir gracing the Straughn stage. While that was the official unveiling of the “new” Straughn Hall, fans who attended the student production of Shrek: The Musical in February were the first patrons of the newly restored auditorium. Named for William Ringgold Straughn, the last principal of Mansfield Normal School and the William Straughn first president of Mansfield State Teachers College, Straughn Hall has returned to its rightful place as the premier facility of its kind serving Mansfield University and the surrounding region.

AUSTIN ORGAN OPUS #297 Straughn Auditorium has housed a musical jewel for more than a century. In 1910, an Austin Organ Opus #297, considered the finest school pipe organ in the state at that time, was installed in the old Alumni Hall. In 1930, the organ, with a new console, was moved into the newly erected Straughn Hall. Sadly, in 2001, the blower was removed and the instrument has been mothballed since then. The Reopening Gala Weekend in May served as the official kickoff for the campaign to restore the Austin Organ Opus #297. We encourage all alumni and friends of Mansfield Music to participate in this campaign and secure a seat in Straughn Auditorium. Please contact Rita Dibble, Vice President for Institutional Advancement at rdibble@mansfield.edu for details on how to support this campaign.

BY THE NUMBERS Faculty, staff, and students completed over

Students have the opportunity to study abroad at MU has

150 colleges and universities in 50 countries.

Mansfield offers a total of

MU alumnus resides in all

50 states and the District of Columbia.

You can find an MU alum in

48 countries around the world.

The average class size at Mansfield is

14 students conducted field research in Belize. There are

10 employees participated in the faculty and staff trip to Belize. The total student body at MU represents There is only

a state system “andAsuniversity, we face

enormous fiscal challenges. At Mansfield we are meeting these challenges with innovative initiatives that promote our university and support student success.

Mansfield University is a member of the Pennsylvania State System of Higher Education.

mansfield.edu This report lists donors and gifts given directly to Mansfield University between July 1, 2015, and June 30, 2016. Please report any omissions/errors to the Office of Institutional Advancement at 570.662.4359 Rita M. Dibble, Vice President for Institutional Advancement can be reached at rdibble@mansfield.edu MANSFIELD UNIVERSITY PRESIDENTâ&amp;#x20AC;&amp;#x2122;S ANNUAL REPORT 2016 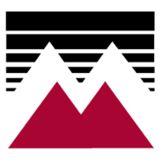