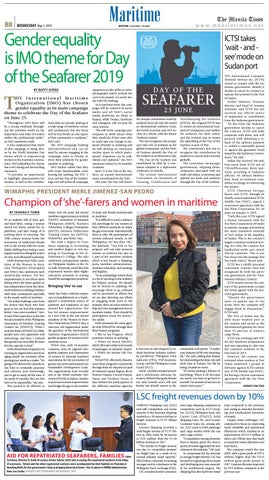 HE International Maritime Organization (IMO) has chosen gender equality as its main campaign theme to celebrate the Day of the Seafarer on June 25. â&amp;#x20AC;&amp;#x153;Throughout 2019 there will be a strong emphasis throughout the maritime world on the importance and value of women within the professional ranks,â&amp;#x20AC;? an IMO statement reads. It also emphasized that much of this campaign is being driven by the World Maritime Day theme which is empowering women in the maritime community). IMO addedthat the theme has a very strong and far-reaching resonance. â&amp;#x20AC;&amp;#x153;It provides an opportunity to highlight opportunities for women, as well as the contribu-

tions they are already making in a wide range of maritime careers and professions, but the focus WILL BE VERY kRMLY ON ONE ASPECT of that community â&amp;#x20AC;&amp;#x201D; seafarers,â&amp;#x20AC;? IMO said. The 2019 campaign hashtag is#IAmOnBoard and can be used by anyone engaging in the campaign, male or female, to show their solidarity for gender equality in seafaring. IMO further added that they will create downloadable cards bearing the hashtag, the SDG 5 icon and the Day of the Seafarer logo and will invite all campaign

SUPPORTERS TO TAKE SELkES OR OTHER photographs which include the card to be posted on social media with the hashtag. As in previous years, the campaign will be centered on social media and all IMOâ&amp;#x20AC;&amp;#x2122;s social media platforms are likely to feature, while Twitter, Facebook and Instagram will account for most activity. â&amp;#x20AC;&amp;#x153;We will invite campaign participants to think about what they would do if they were able to make just one change to improve diversity in seafaring and we will develop an interactive on-line space in which participantsâ&amp;#x20AC;&amp;#x2122; responses can be submitted and captured,â&amp;#x20AC;? the IMO statement relayed to its member countries. June 25 is the Day of the Seafarer, an annual international event coordinated by the IMO. This year, the Day will honor

the unique contribution made by seafarers from all over the world to international seaborne trade, the world economy and civil society as a whole, with the theme â&amp;#x20AC;&amp;#x2DC;Seafarers Matter.â&amp;#x20AC;&amp;#x2122; The day recognizes the unique and vital role of seafarers in the global community, and the United Nations identify the Day of the Seafarer as an observance day. The Day of the Seafarer was established in 2010 by a resolution adopted at a diplomatic conference in Manila. The revised International Convention on Standards of Training, Certification and

Watchkeeping for Seafarers (STCW), the original STCW was to ensure an international standard of competency and welfare for seafarers, for their safety, and the revision was to ensure the upholding of the Day of the Seafarer as part of this. The conventionâ&amp;#x20AC;&amp;#x2122;s aim was to recognize the contribution by seafarers to society and economy globally. The resolution encourages governments, shipping firms, companies associated with sea trade and others, to promote and uphold sea trade and seafarers through the Day of the Seafarer.

Champion of â&amp;#x20AC;&amp;#x2DC;sheâ&amp;#x20AC;&amp;#x2122;-farers and women in maritime Merle, over the years, led several maritime organizations to include IN an industry full of steel, grit, PAMTCI, Movement of Maritime and hard labor, seeing a woman Philippines (MMP), Mariners stretch her limits, unveil her ca- Polytechnic Colleges Foundation pabilities, and take charge of is (MPCF), Mariners Polytechnic nothing short of amazing. The Training Center, Inc (MPTCI), 20th century woman broke the WIMAPHIL, and WIMA Asia. She took a degree in Commonotony of traditional female role in the society with her career merce majoring in Accounting ladder shifting from being a mere and another degree in Arts masupport system to being the source joring in Sociology at the St. OF CALM AND INlUENTIAL LEADERSHIP Scholasticaâ&amp;#x20AC;&amp;#x2122;s College. She also Merle Jimenez-San Pedro, pres- underwent post-graduate studies ident of the Women in Mari- on Philippine Studies at the De time Philippines (Wimaphil) La Salle University, proof that this and WIMA Asia, epitomizes such empowered woman takes higher modern-day woman. For her, education seriously in arming empowerment is not about iden- herself for management positions. tifying whoâ&amp;#x20AC;&amp;#x2122;s the better gender or has independence from the other. Bringing â&amp;#x20AC;&amp;#x2DC;sheâ&amp;#x20AC;&amp;#x2122; to sea Merle believes in striking a balance with male counterparts especially Merle San Pedro, with her numerous accomplishments as a leader, in the manly world of maritime. â&amp;#x20AC;&amp;#x153;My initial challenge came from ignited a tremendous source of the notion that those who have positivity and inspiration in and gone to sea can lead this industry around her organization. She better; I was never a seafarer,â&amp;#x20AC;? Mer- has led women empowerment LE SAID OF HER EXPERIENCE AS THE kRST to a new scale as she was elected female president of the Philippine president of the Women in MariAssociation of Maritime Training time Associations (WIMA) Asia, a Centers, Inc. (PAMTCI). â&amp;#x20AC;&amp;#x153;When I nine-year old organization under took the helm of PAMTCI in 2006, the guidance of the International people were very supportive and Maritime Organizationâ&amp;#x20AC;&amp;#x2122;s (IMO) welcoming, and then I realized gender program for women in the that gender was not really the issue maritime sector. WIMA Asia, with 18 member but the capacity to lead.â&amp;#x20AC;? Merle shared that competence in countries, aims for regional interunning an organization and man- gration, support, and cooperation aging people are necessary when of women in national maritime proving your worth as a leader. â&amp;#x20AC;&amp;#x153;Itâ&amp;#x20AC;&amp;#x2122;s associations for the promotion of going to be about your capacity so greater and active participation on you have to constantly persevere Sustainable Development Goals. and enhance your knowledge; The organizations have recently youâ&amp;#x20AC;&amp;#x2122;ve got to study all the time. If met at the World Maritime UniWE SPEAK OF EQUALITY THEN WE kRST versity (WMU) in Malmo, Sweden have to be responsible,â&amp;#x20AC;? she says. to promote women empowerment This proved to be effective as and bridge the gap in the number BY YASHIKA F. TORIB

of male and female professionals in maritime. g)T IS DIFkCULT TO REACH A SUBSTANtial percentage for our women to have different positions on ships, the gap is too wide. Internationally there is only 2% participation of women onboard vessels; in the Philippines, itâ&amp;#x20AC;&amp;#x2122;s less than 1%,â&amp;#x20AC;? she disclosed. â&amp;#x20AC;&amp;#x153;Our SHE to Sea program will not only promote women as seafarers but also as a part of the maritime industry which is very broad â&amp;#x20AC;&amp;#x201D; shipping, ports, maritime administration, maritime education and training, and logistics. â&amp;#x20AC;&amp;#x153;As an archipelagic nation there is a lot of opening in this industry for Filipino women. We should not be limited in seafaring. We encourage them to go onboard AND BE PROMOTED AS OFkCERS BUT we are also directing our efforts to engaging them more to the industry, there are more women in ship and crew management even in maritime media. There should be participation across the sectors,â&amp;#x20AC;? she added. Merle promotes the same agenda with WIMAPHIL through their three banner programs: â&amp;#x20AC;&amp;#x201C; She to Sea Program, which promotes women in seafaring â&amp;#x20AC;&amp;#x201C; WIMA on Watch (WOW), which allocates safety and security of passengers in domestic vessels â&amp;#x20AC;&amp;#x201C; WIMA for Marine Life Protection WIMAPHIL effectively disseminates these programs nationwide through their six chapters located in National Capital Region, Bicol, Western Visayas, Central Visayas, Davao and Northern Luzon. It also enlisted the participation of the different maritime agencies

to become its sub-chapters to include Maritime Industry Authority (MARINA), Philippine Ports Authority (PPA), PNP-Maritime Group, and the Philippine Coast Guard (PCG). Merle, a family-oriented person and a well-known advocate for women, believes that goals should not only benefit oneâ&amp;#x20AC;&amp;#x2122;s self and family, but should extend to the

THE International Container Terminal Services Inc. (ICTSI) vowed to comply with the Sudanese government, should it decide to cancel its contract to operate the terminal in the Port of Sudan. Arthur Tabuena, Treasury director and head of investor relations, said ICTSI has not received any official notice of suspension or cancellation from the Sudanese government. â&amp;#x20AC;&amp;#x153;In the event the Sudanese government decides to cancel the contract, ICTSI will fully cooperate with them, and will proceed with obtaining a refund of the upfront payment â&amp;#x20AC;&amp;#x201D; within a reasonable period â&amp;#x20AC;&amp;#x201D; against the guarantee bond issued by the Sudanese Government,â&amp;#x20AC;? he said. Sudan has received 410 million euros from ICTSI out of 530-million-euro down payment, according to Sudanese official, Ali Ahmed Abdelrahim, head of technical committee in-charge of contracting the project. I CT S I C h a i r m a n E n r i q u e Razon said ICTSI, through its wholly owned subsidiary ICTSI Middle East DMCC, signed a concession agreement with the Sea Ports Corporation for 20 years on January 3, 2019. â&amp;#x20AC;&amp;#x153;Early this year, ICTSI signed a 20-year concession with the Sea Ports Corporation of Sudan to operate, manage and develop the main containers terminal of Port Sudan in the Republic of Sudan. This is the countryâ&amp;#x20AC;&amp;#x2122;s largest container terminal serving not only the country but landlocked north and central African countries. This is our first foray into the strategic Red Sea trade routes,â&amp;#x20AC;? Razon said. ICTSI has a validly procured concession contract that was recognized by both the previous government and the Transitional Military Council. ICTSI would execute the contract if the government accepts the terms agreed with the previous government. â&amp;#x20AC;&amp;#x153; S h o u l d t h e g ove r n m e n t want to update any of the terms, then the company will engage them in discussions,â&amp;#x20AC;? ICTSI said. The Port of Sudan was the only major modern port in the country and served as the international gateway for more than 95 percent of Sudanâ&amp;#x20AC;&amp;#x2122;s cargo flows. ICTSI was working with SPC for the handover preparations and was expecting to take over the container terminal in the first half of 2019. However, the contract was reviewed when workers at Port Sudan undertook a protest in February against ICTSI subsidiary, ICTSI Middle East DMCC, for having a 20-year concession agreement with the Sea Ports Corporation. GENIVI FACTAO

LSC freight revenues down by 10%

Labor Secretary Silvestre H. Bello III assures Arturo TaleĂąo, (left) who is among the repatriated seafarers from Libya, of assistance. ToleĂąo and the other repatriated seafarers were accompanied by their families on Thursday in thanking Bello for the governmentâ&amp;#x20AC;&amp;#x2122;s help in bringing them back home. Also in photo is OWWA Administrator Hans Leo Cacdac. PHOTO BY DODONG ECHAVEZ, IPS

LORENZO Shipping Corp. (LSC) said stiff competition and excess capacity in the domestic shipping resulted to a 10 -percent decline in freight revenues to P1.97 billion last year. Lorenzo Shipping recorded a total freight revenue of P1.97 billion in 2018, lower by 10 percent or P211 million than the P2.18 billion revenues in 2017. â&amp;#x20AC;&amp;#x153;The decline in freight revenue was due to competitive pressure on freight base as a result of increased industry vessel capacity,â&amp;#x20AC;? Ellen Estinar, corporate accounting manager said in a disclosure to the Philippine Stock Exchange (PSE). LSC considered other container-

ized cargo shipping companies as competitors, such as 2GO Group, Inc. (2GO), Philippine Span Asia Carrier Corp. (PSACC), Solid Shipping Lines, Inc. and Oceanic Container Lines, Inc. among others. 2GO caters to both passenger and cargo market while the rest were cargo carriers. â&amp;#x20AC;&amp;#x153;Competition among domestic lines is intense, given the overcapacity of vessels aggravated by new entrants in the industry,â&amp;#x20AC;? LSC said. To compensate for the decrease in average freight revenue, LSC has focused on regaining old accounts and developing new ones especially for northbound cargoes. The shipping line also had fewer vessel

trips compared to the previous year owing to extended dry-docking and unscheduled downtime of vessels. Despite these challenges, LSC continued to focus on improving vessel reliability and operational EFkCIENCIES WHICH RESULTED TO AN improvement of P223 million in direct cost. Efforts were also made to maximize vessel utilization and load factor. The company ended the year WITH A GROSS PROkT OF 0 million, higher than the P34.6 million gross profit posted in 2017. Expenses likewise improved by P9.9 million compared to the previous year.

The Manila Times is one of the leading national broadsheets in the Philippines. It is also one of the oldest, having been founded in 1898. 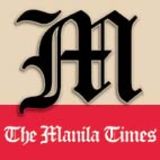 More from The Manila Times