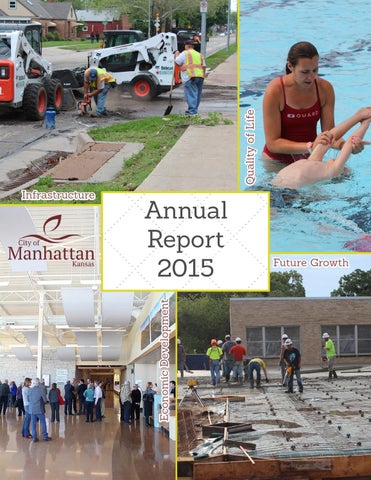 Dear citizens: As you will see in this report, the City of Manhattan is flying high after a successful 2015. We opened the first phase of the terminal expansion project at Manhattan Regional Airport and saw record enplanements in spite of the ongoing construction. The new terminal focuses on enhanced services with a passenger boarding bridge and plenty of room to grow. The second phase of the expansion is well underway.

Streets and parks were frequent conversation topics in the community this year. Near the end of 2015, we formed a steering committee of neighborhood representatives and stakeholders to investigate the best way to fund street maintenance in the future. This is likely to result in a ballot initiative in 2016 to allow Manhattan voters to weigh in on the issue. We also furthered many plans for parks through conversation, design and construction. Anneberg Parkâ&#x20AC;&#x2122;s sports fields are receiving much needed rejuvenation with installation of synthetic surfaces for soccer and baseball/ softball and new sports lighting. The Strategic Facility Improvement Plan launched a feasibility study with emphasis on improved indoor gym space and other amenities; and we annexed a new 80-acre park in the Lee Mill Heights area that will help provide future outdoor recreation space in the southwest part of the city. We continue to support the infrastructure and growth needs in the North Campus Corridor. Construction is underway at the National Bio and Agro-Defense Facility, and Kansas State University is moving ahead with plans to develop public-private partnership opportunities in the corridor. The City is working through design plans for infrastructure improvements in the area that will help KSU achieve its goals for the corridor and advance its goal to be a Top 50 research university. The City of Manhattan is committed to providing quality services and facilities to help everyone be successful. I am thankful to our employees for all their extra efforts and events to â&#x20AC;&#x153;give backâ&#x20AC;? to the community, such as United Way, Project Manhattan for the Flint Hills Breadbasket or blood donations for the Red Cross, to name a few. The significant activity and growth happening in and around Manhattan make our community a great place to live, learn, work and play.

The City operates under a commission-manager form of government. The city commission has five members who are elected at-large on a non-partisan basis. The commission determines all matters of policy, adopts the annual budget and appoints the city manager to serve as the chief administrative officer of the city and be responsible for the day-to-day operation of the city organization. The City is comprised of nine departments: Airport, City Manager’s Office, Community Development, Finance, Fire, Human Resources, Legal, Parks and Recreation, and Public Works. City commission legislative meetings are generally the first and third Tuesday of each month at 7 p.m., preceded by a discussion/ briefing session at 5:30 p.m. Commission work sessions are the second and fourth Tuesday of each month at 5:30 p.m. These meetings are in the City Commission Room at City Hall, 1101 Poyntz Ave.

Commission meetings are broadcast live on local Cox Communications cable channel 3. The meetings are also available on the city’s website at CityofMHK.com/TV. For a listing of meeting replays on Channel 3, visit CityofMHK.com/Ch3. Several of the City Commission’s advisory boards are also televised including the Manhattan Urban Area Planning Board, Parks and Recreation Advisory Board and Airport Advisory Board.

Quality of Life Strategic Facility Study Four priorities were identified in 2015 in the Strategic Facility Study to identify future opportunities for Manhattan Parks and Recreation. With those priorities, a feasibility study began to evaluate locations for neighborhood recreation centers, determine the feasibility of indoor aquatics, evaluate outdoor sport and recreation facility playability concerns, and find ways to improve existing parks and trails. Results of the study are expected in mid-2016.

Anneberg Park Improvements Synthetic turf infields, an oversized synthetic soccer field and sports lighting were the major components of improvements at Anneberg Park. The $2.65 million upgrades to four softball/baseball fields and one soccer field were greatly needed for these nearly 30-year-old facilities.

Park at Lee Mill Heights The City annexed parkland in the Lee Mill Heights development in 2015, and planning will be underway soon for a new 80-acre park. The goal of the park is to develop a new natural area park, which offers a unique opportunity to experience the beauty of the Flint Hills without leaving the city. The park is located east of Scenic Drive and south of Miller Parkway.

Discovery Center Major Donor Marty Vanier and the late Bob Krause of Horizon Ranch donated $750,000 for naming rights, debt reduction and general support at Flint Hills Discovery Center. The Immersive Experience theater has taken on the name of the ranch, and the City is grateful for the work of the FHDC Foundation in fostering this gift.

Tigers & Cheetahs Return Sunset Zoo welcomed a bevy of new animals, including 8-year-old Malayan tiger brothers Hakim and Malik. The tigers will be getting a new home after the zoo also launched Expedition Asia, a capital campaign to raise $2.35 million to renovate the tiger, sloth bear and leopard exhibits. The renovations will also improve animal care areas and ADA accessibility on the paths within the zoo. The tigersâ&#x20AC;&#x2122; debut followed additions of an otter, two cheetahs, a wallaby joey, and three swift fox kits.

Record Attendance Sunset Zoo and Douglass Community Recreation Center experienced significant increases in attendance in 2015. The Zoo welcomed 85,897 guests and had record-breaking crowds during its annual Halloween-themed family event and during Community Appreciation Day. Through expanded programming and marketing, the DCRC increased overall attendance by 30 percent to 22,939 with classes such as Zumba and at events such as Blues and BBQ.

City Park Master Plan With input from park users and residents at large, the Parks and Recreation department drafted master plan options for City Park. The variations in the two plans included green space, tennis courts, connectivity and more. The two options will be merged in 2016 for the community to consider. The City was recognized for the 39th year as a Tree City USA and is a testament to the hard work of the forestry, parks and horticulture crews.

Future Growth Manhattan Area 2035 The City adopted a new comprehensive plan with growth strategies through 2035. The plan includes proposed downzoning east of City Park, upzoning west of the Kansas State University campus, and the development of an Urban Core Residential district near campus to facilitate even higher density housing.

Know Your Flood Risk The Know Your Flood Risk public education campaign continued in 2015 after the City of Manhattan adopted new floodplain maps and higher standard floodplain regulations. These new standards changed the federal flood insurance requirement status for hundreds of homeowners in the community.

In 2015, the City annexed 102 acres of land, completed 11 residential subdivisions and issued 440 construction permits with a construction valuation of $100.5 million. Of those permits, 280 were issued for residential development: 152 single-family homes, 6 two-family homes and 122 multifamily homes.

City Hall Expansion A 7,500-square-foot expansion on the north side of City Hall became home to the Parks and Recreation department in January 2016. The $1.3 million construction project allowed approximately 16 Parks and Recreation office staff to relocate to suitable office space from a converted shop building in City Park. Heating, ventilation and air conditioning improvements, as well as ADA stage access, were improved in Peace Memorial Auditorium at the same time. A friends group was formed to raise funds to establish a suitable memorial to soldiers in the auditoirum foyer as well as rejuvenate the stage.

Street Maintenance The Manhattan City Commission appointed a Street Maintenance Steering Committee in late 2015 to explore funding options for future street maintenance activities in Manhattan. The nine-member committee is tasked with exploring funding options, a possible ballot question and wording, and a program for how the funds will be used. In 2015, contractors replaced concrete panels in the Northview area and completed asphalt mill and overlay projects in the Westwood and Dickens areas. City street crews completed concrete, asphalt, and crack and seal repairs across the city.

Economic Development Terminal Expansion The first phase of a $15.8 million terminal expansion project at Manhattan Regional Airport was completed in 2015. Work on the second phase ensued and is scheduled for completion in 2016. When complete, the terminal will feature two enclosed passenger boarding bridges, a meet-and-greet area, food service space, baggage claim area, new rental car area, hold rooms and maintenance rooms. The project is being funded at more than 75 percent by a Federal Aviation Administration grant, with the balance from city funding.

Fixed-Base Operator (FBO) Schultz Construction broke ground on a new fixedbase operator facility at the end of 2015. The new facility located on the east side of the airport off Airport Road will house general aviation activities in a better indoor space and provide direct access to the airfield at Manhattan Regional Airport. The facility and adjacent parking lot are a combined $1.5 million improvement with primary funding provided through a long-term lease arrangement with Kansas Air Center.

Manhattan Regional Airport saw a record number of enplanements again in 2015, with 63,814 passengers using the airportâ&#x20AC;&#x2122;s services. Both commercial airline passengers as well as general aviation customers â&#x20AC;&#x201D; such as those using military and university charter flights â&#x20AC;&#x201D; saw increases. The terminal expansion and FBO construction are anticipated to meet the needs of projected use.

North Campus Corridor Consultants are working toward 30% completion on design plans for the North Campus Corridor, a critical area of development as Kansas State University grows and construction begins on the National Bio and AgroDefense Facility. The City and KSU have committed a combined $550,000 in funds to the design work, which is expected to be complete in spring 2016. The designs include roadway and intersection improvements, pedestrian paths, sidewalks, streetscaping, fencing and signage in the corridor.

Economic Development Funds Nearly 64 percent of economic development funds since 1995 have been invested in “grow your own” businesses and have assisted local companies with expansions. CivicPlus and Tallgrass Brewing Co. have invested nearly $11.9 million and $5.2 million in new and refurbished facilities in downtown and at the Manhattan Business Park, respectively.

Infrastructure Stormwater Improvements At CiCo Park, a detention basin was constructed along the existing creek channel to increase temporary stormwater storage volume during and after storms, which then reduces the flood risk for homes downstream. Excavation material was used to enhance the â&#x20AC;&#x153;CiCo Hillâ&#x20AC;? for sledding improvements.

Water Volume Due to population growth and projected water needs, the City is building a water line extension in Blue Township in Pottawatomie County. The City will extend its existing main to Excel Road, then north to a pump station. The main continues north to a new water tower 2.5 miles north of U.S. Highway 24. The cost of the project is being split between the City and Pottawatomie County Rural Water District No. 1. 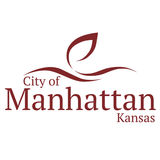