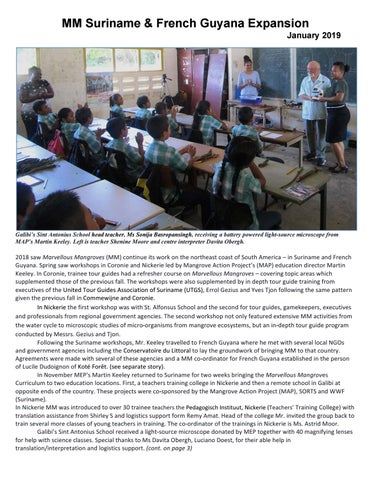 2018 saw Marvellous Mangroves (MM) continue its work on the northeast coast of South America – in Suriname and French Guyana. Spring saw workshops in Coronie and Nickerie led by Mangrove Action Project’s (MAP) education director Martin Keeley. In Coronie, trainee tour guides had a refresher course on Marvellous Mangroves – covering topic areas which supplemented those of the previous fall. The workshops were also supplemented by in depth tour guide training from executives of the United Tour Guides Association of Suriname (UTGS), Errol Gezius and Yves Tjon following the same pattern given the previous fall in Commewijne and Coronie. In Nickerie the first workshop was with St. Alfonsus School and the second for tour guides, gamekeepers, executives and professionals from regional government agencies. The second workshop not only featured extensive MM activities from the water cycle to microscopic studies of micro-organisms from mangrove ecosystems, but an in-depth tour guide program conducted by Messrs. Gezius and Tjon. Following the Suriname workshops, Mr. Keeley travelled to French Guyana where he met with several local NGOs and government agencies including the Conservatoire du Littoral to lay the groundwork of bringing MM to that country. Agreements were made with several of these agencies and a MM co-ordinator for French Guyana established in the person of Lucile Dudoignon of Koté Forêt. (see separate story). In November MEP's Martin Keeley returned to Suriname for two weeks bringing the Marvellous Mangroves Curriculum to two education locations. First, a teachers training college in Nickerie and then a remote school in Galibi at opposite ends of the country. These projects were co-sponsored by the Mangrove Action Project (MAP), SORTS and WWF (Suriname). In Nickerie MM was introduced to over 30 trainee teachers the Pedagogisch Instituut, Nickerie (Teachers’ Training College) with translation assistance from Shirley S and logistics support form Remy Amat. Head of the college Mr. invited the group back to train several more classes of young teachers in training. The co-ordinator of the trainings in Nickerie is Ms. Astrid Moor. Galibi’s Sint Antonius School received a light-source microscope donated by MEP together with 40 magnifying lenses for help with science classes. Special thanks to Ms Davita Obergh, Luciano Doest, for their able help in translation/interpretation and logistics support. (cont. on page 3)

2 (Cont. from page 2) Martin Keeley also made a special presentation of his Marvellous Mangroves Myths & Legends book together with a MAP 2019 Children’s calendar during his visit to Galibi to Assistant Chief, Langaman Hein representing Chief Pane Richardo, and Chief Alamijawari Belowin. (see photo on Page 4).

During the school workshop 33 students who ranged in age from 8 to 14 and their teacher, Ms. Shenine Moor, helped translate some of the key points of MM into the local language, Karina. Two posters are being prepared in this language for the school, the Water Cycle and Mangrove Ecosystem. It is planned to use these posters as part of the MM program in French Guyana as there are several villages on the south side of the river border where Karina is also spoken. Supplemental translation was provided by Starian Aloewanai. “Translating MM into indigenous languages has a couple of major goals. With many indigenous languages under threat it not only helps to reinforce the use of the language, but at the same time it shows both students and adults the value of mangrove ecosystems and how they function,” Keeley says. “In addition it helps translate what was primarily an oral language into one that is written – thus giving it a more permanent base.”

Game wardens and Nickerie tour guides at the three-day MM workshop with a focus on mangrove ecotourism with their completion certificates.

Microscopes and the wonderful world of micro-organisms

Microscopes are the core of MM to enable students and adults to examine the microscopic world of mangroves. Almost all of them have never seen a microscope before and so MAP and MEP present light source rechargeable microscopes to schools wherever it conducts a MM workshop. These then go on to form the core of the Mangrove Clubs in each school. The photos about show a game warden (left) in Nickerie and a student in Galibi (right) discovering the wonderful micro word of mangroves!

Students in Galibi checking out mangrove leaves and roots– with tongue and lens!

Great news – the Mangrove Education Project Ltd. (MEP) has finally gotten its non-profit certification in the Cayman Islands. After several frustrating years while the Cayman government worked on establishing the NGO criteria not to mention a certain amount of bureaucratic red tape and ineptitude, our non-profit status came through last summer. Then came the hassle of setting up a bank account – but First Caribbean came through in a flash. Add to this our wonderful new logo designed by Daniella Christian who was responsible for the fabulous illustrations in Marvellous Mangroves Myths & Legends AND a grant from the Lush Charity Pot towards the French Guyana MM project. MEP originally operated as the Global Mangrove & Reef Education Association, but it was decided to shorten the name to be more specifically focussed on our work.*