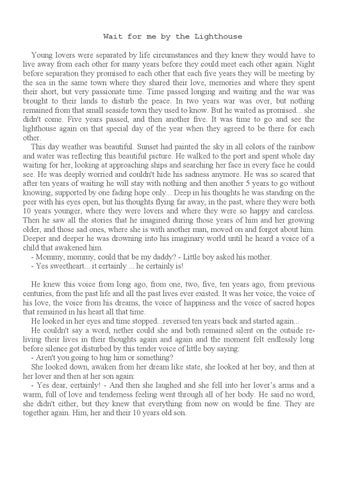 Wait for me by the Lighthouse Young lovers were separated by life circumstances and they knew they would have to live away from each other for many years before they could meet each other again. Night before separation they promised to each other that each five years they will be meeting by the sea in the same town where they shared their love, memories and where they spent their short, but very passionate time. Time passed longing and waiting and the war was brought to their lands to disturb the peace. In two years war was over, but nothing remained from that small seaside town they used to know. But he waited as promised... she didn't come. Five years passed, and then another five. It was time to go and see the lighthouse again on that special day of the year when they agreed to be there for each other. This day weather was beautiful. Sunset had painted the sky in all colors of the rainbow and water was reflecting this beautiful picture. He walked to the port and spent whole day waiting for her, looking at approaching ships and searching her face in every face he could see. He was deeply worried and couldn't hide his sadness anymore. He was so scared that after ten years of waiting he will stay with nothing and then another 5 years to go without knowing, supported by one fading hope only... Deep in his thoughts he was standing on the peer with his eyes open, but his thoughts flying far away, in the past, where they were both 10 years younger, where they were lovers and where they were so happy and careless. Then he saw all the stories that he imagined during those years of him and her growing older, and those sad ones, where she is with another man, moved on and forgot about him. Deeper and deeper he was drowning into his imaginary world until he heard a voice of a child that awakened him. - Mommy, mommy, could that be my daddy? - Little boy asked his mother. - Yes sweetheart... it certainly ... he certainly is! He knew this voice from long ago, from one, two, five, ten years ago, from previous centuries, from the past life and all the past lives ever existed. It was her voice, the voice of his love, the voice from his dreams, the voice of happiness and the voice of sacred hopes that remained in his heart all that time. He looked in her eyes and time stopped...reversed ten years back and started again... He couldn't say a word, nether could she and both remained silent on the outside reliving their lives in their thoughts again and again and the moment felt endlessly long before silence got disturbed by this tender voice of little boy saying: - Aren't you going to hug him or something? She looked down, awaken from her dream like state, she looked at her boy, and then at her lover and then at her son again: - Yes dear, certainly! - And then she laughed and she fell into her loverâ&#x20AC;&#x2122;s arms and a warm, full of love and tenderness feeling went through all of her body. He said no word, she didn't either, but they knew that everything from now on would be fine. They are together again. Him, her and their 10 years old son. 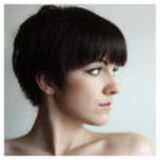 Wait for me by the lighthouse

The story of a bunny couple that I illustrated and made in clay and separated the couple into two journal covers.

Wait for me by the lighthouse

The story of a bunny couple that I illustrated and made in clay and separated the couple into two journal covers.