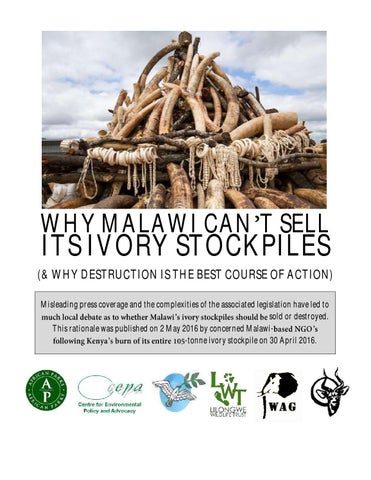 WHY MALAWI CAN T SELL

(&amp; WHY DESTRUCTION IS THE BEST COURSE OF ACTION) Misleading press coverage and the complexities of the associated legislation have led to sold or destroyed. This rationale was published on 2 May 2016 by concerned Malawi-tonne ivory stockpile on 30 April 2016.

ILES? 1) THE INTERNATIONAL TRADE IN IVORY IS BANNED The international trade in ivory was banned in 1989 by the Convention on International Trade in Endangered Species of Fauna and Flora (CITES), to which Malawi is a signatory1 phant population (together with all African elephant populations except South Africa, Botswana, Namibia and Zimbabwe which are listed as Appendix II) is listed on Appendix I of CITES, which prevents all international trade. , to do so would break international law and the repercussions on any country doing so would be significant. Even if Malawi left CITES, there would be nobody to sell to as the rest of the world abides by this convention2. 2) IVORY TRADE WITHIN MALAWI IS BANNED In some countries there are still markets for ivory within their borders but these are generally closing down. Even in China, the biggest domestic market in the world, President Xi Jinping has pledged to put an end to domestic commercial trade of ivory3. Malawi itself placed a domestic moratorium on any trade in ivory in 2014. 3) IT IS VERY UNLIKELY THAT THE INTERNATIONAL BAN WILL BE LIFTED Two one off sales were allowed in 1999 and 2008. Instead of flooding the market with ivory to bring the price down it has been attributed to increasing demand and thus poaching. Trade in legal ivory provides a cover for illegal ivory because it is almost impossible to distinguish between the two. As a result it is extremely unlikely that CITES will ever agree to any sales again. 4) AND EVEN IF IT WAS classified as seized ivory which could never be sold anyway. According to CITES seized illegal ivory may never be sold. This is consistent with its status as an unlawful product, and with international norms on the disposal of seized contraband. Therefore, only ivory from natural deaths or problem animal control can ever be considered for sale, and all seized ivory must either be disposed of or securely held forever. Note also that even after a court processes contraband ivory, the ivory cannot then be traded as a Government trophy it is still classed as seized ivory, sourced through illegal means and therefore can never be sold.

ivory refers to that procured through criminal activity e.g. poaching, trafficking. Countries like Zambia, stockpiles - but not Malawi. There are four African countries with elephant populations listed as Appendix II and not Appendix I South Africa, Botswana, Namibia and Zimbabwe. There is a moratorium on sales by these countries until at least 2017 and, considering the on-going threat to African elephant populations, little chance of a sale , perhaps Malawi could apply to have their elephant populations down-listed and thus apply for sales of legal ivory collected in the future? would refuse any application made by Malawi to down-list their elephant population for the foreseeable future given the innumerable local challenges faced (declining populations, poor law enforcement etc.). Tanzania and Zambia applied to down-list their elephant populations in 2010 hoping to become eligible to sell ivory in another application down the line, and they were faring significantly better than Malawi is now. They were rejected. Given the unique economics of the trade and the devastating impact species, there is no easy comparison, but marijuana might be a helpful one for some relating to the ethics a few countries. The majority of the population would not support the storage of cannabis seized from criminals in the hope that it could be sold on to these markets at a future date in the unlikely event that international trade might become legal.

IS WORTH NOTHING TO MALAWI IT CANNOT BE SOLD

As explained above, the ivory stockpile and therefore has no legal economic value. In no way can Malawi profit because this would be illegal. 2) could. They have no respect for the law and are prepared to partake in organised crime and risk custodial sentences to profit from the illicit ivory markets. Time and again we have seen how Government stockpiles in other countries have been infiltrated and ivory has been stolen. nothing to suggest that Malawi would be any different. to note that illegal wildlife trade is the 4th largest transnational crime in the world and has even been linked to terrorism4. Malawi should be doing all it can to deter such criminality within its borders. 3) REMOVE THE FINANCIAL BURDEN OF SECURITY The Department of National Parks &amp; Wildlife are working to provide the best security possible with very limited funds and resources. Remove the stockpile and those resources could be diverted elsewhere. 4) Some commentators have alternative would be to release the ivory onto the market to drive down the price and put the poachers and traffickers out of business. This argument put forward by Kenyan commentators is a helpful analogy5: -simplistic economic arguments like these are dangerous. The relation between supply, price and demand is much more complex than we are sometimes led to believe, and is often hard to predict. But we know that lowering the demand and increases the volume of sales. Think of mobile phones. Smart producers realised it was in their interest to reduce prices to tap into the vast potential market in Africa. The potential market for ivory is just as huge. The current population of China stands at 1.37 billion people and rising and surveys indicate that more that 80% of them would 44

like to own some ivory. By releasing ivory for sale we will be playing into the hands of the traffickers by opening up more of this market for them to exploit. n elephants standing at less than 500,000 and falling the gap between the potential supply and potential demand is simply too wide. from the market. In other words, we need a political solution and not an economic one. There are two complementary ways to do this: one is to attach a stigma to buying the product, and the other is to make it illegal. These approaches have been adopted with some success to shut down the trade in whale products and animal furs. Ivory destruction is a highly visible political statement of intent. As such it can make an important contribution towards raising awareness of the issues, stigmatising the purchase of ivory and galvanising global support for a total tr 5) AVOID FURTHER INTERNATIONAL EMBARRASSMENT Each year there is a stringent audit of ivory stockpiles for all countries who are signatories to CITES. If the headlines when coupled with the ivory burn postponements, the ongoing baseless ivory sale debate and embarrassments like inadequate sentencing of significant wildlife traffickers. The economics of the ivory trade are complicated, but put simply leaking ivory into these black markets s elephant crisis. Thus some may claim that Malawi would be culpable, having actively chosen not to put ivory stockpiles out of economic use despite the risks. 6) INSTEAD, Malawi has been identified as a soft target for wildlife criminals because of weak law enforcement and legislation6 and, sadly, stories of corruption. Malawi has, at the very least, been used as a transit route for the biggest ivory seizures of all time7. Destroying ivory stockpiles would help a great deal towards rectifying this, showing that Malawi has strong ethics, values its natural resources and its national security, rejects a trade which could result in the extinction of elephants and is a country that does not 6

http://www.lilongwewildlife.org/programmes/advocacy/illegal-wildlife-trade-assessment/ The biggest ever seizure at 6.5 tonnes equivalent to over 150 elephants - was made in Singapore in 2002 and had been shipped fro capital of Lilongwe. I 7

shy away from taking strong and decisive action. H.E. Prof Arthur Peter Mutharika and 15 Ambassadors and High Commissioners recently appeared in a video8, in support of the stop wildlife crime campaign, that also rejected trade in ivory. Both international and local press praised the move, but also urged for action9. Malawi is known as the Warm Heart of Africa art for its wildlife. 7)

Destruction of ivory stockpiles is part of a wider conservation strategy to eliminate demand for ivory and put value instead on living elephants. Wildlife tourism represents a significant opportunity for economic growth, but only if our tourism attractions are safeguarded, including elephants and the natural ecosystems they help to maintain. For those focused t is worth comparing the amount of forex that is, or can be, generated through tourism that is in effect reliant on our natural heritage, of which elephants are our most iconic species10. This document is not intended as a debate on the value of wildlife but suffice to say its wellbeing is intrinsically linked with our own. Elephants are an important keystone species and their loss will impact our elephants given the benefits of this keystone species, what hope do we have for the rest of our wildlife? 8) SHOW SOLIDARITY FOR GLOBAL CONSERVATION EFFORTS &amp; ATTRACT INTERNATIONAL SUPPORT Illegal wildlife trade is currently one of the greatest threats to the survival of wildlife11. Data released on World Wildlife Day (2016) shows that elephants are now being killed at a faster rate than they are being born. At least 20,000 elephants were killed for ivory in 2015.12 Collaboration within and between countries is critical and, given that Malawi is being exploited and targeted by wildlife criminals trafficking ivory, our actions are significant. Will Malawi show solidarity

for international conservation efforts, reject the ivory trade and send out a bold statement, or will it hold on to its ivory on the (virtually hopeless) possibility that it could one day profit from a sale? Malawi is a signatory to a number of international agreements13 which include rejecting the ivory trade. These include the Elephant Protection Initiative which pledges to put ivory stockpiles out of economic use. Actions speak louder than words and the world is watching with interest as to what course of action Malawi will choose. These include environmental donors whose support will be critical for wildlife protection going forward and Malawi is ultimately competing against other countries for funding. The misinformed ivory sale vs burn debate and subsequent inaction has been detrimental to this cause.

Africa Kenyan leader, President Moi, lit the first bonfire of confiscated ivory in 1989. Secondly, this is now a practice being followed by governments in developed and developing countries around the world and the organisations supporting this rationale are all Malawi. The 2014 countries that have destroyed stockpiles in the last two years alone include Mozambique, Gabon, Chad, Republic of Congo, Ethiopia, Malaysia, USA and China. Kenya has just destroyed its entire 120 tonne stockpile. Have all these countries lost their way, or are they choosing to send out a strong message, to wildlife criminals and the rest of the world, that ivory is not for trade and that they are serious about saving elephants?

In the past two years Malawi has signed a number of other international agreements regarding the illegal wildlife trade including the Clinton Global Initiative (Sept 2013), the London Declaration on Illegal Wildlife Trade (Feb 2014), the Arusha Declaration on Wildlife Crime (Nov 2014), the Kasane Statement on Illegal Wildlife Trade (June 2015) and the Elephant Protection Initiative (March 2015) 13

Misleading press coverage and the complexities of the associated legislation have led to much local debate as to whether Malawi’s ivory stockpiles should be sold or destroyed. This rationale was published on 2 May 2016 by concerned Malawi-based NGO’s following Kenya’s burn of its entire 105-tonne ivory stockpile on 30 April 2016.