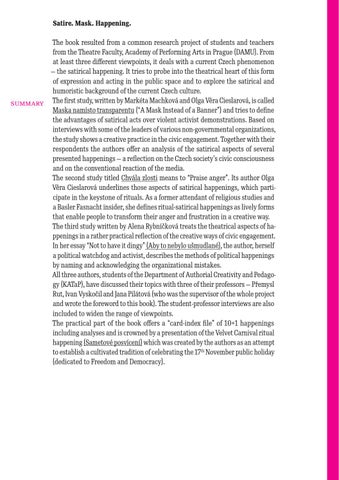 Satire. Mask. Happening. The book resulted from a common research project of students and teachers from the Theatre Faculty, Academy of Performing Arts in Prague (DAMU). From at least three different viewpoints, it deals with a current Czech phenomenon — the satirical happening. It tries to probe into the theatrical heart of this form of expression and acting in the public space and to explore the satirical and humoristic background of the current Czech culture. summary The first study, written by Markéta Machková and Olga Věra Cieslarová, is called Maska namísto transparentu (“A Mask Instead of a Banner”) and tries to define the advantages of satirical acts over violent activist demonstrations. Based on interviews with some of the leaders of various non-governmental organizations, the study shows a creative practice in the civic engagement. Together with their respondents the authors offer an analysis of the satirical aspects of several presented happenings — a reflection on the Czech society’s civic consciousness and on the conventional reaction of the media. The second study titled Chvála zlosti means to “Praise anger”. Its author Olga Věra Cieslarová underlines those aspects of satirical happenings, which participate in the keystone of rituals. As a former attendant of religious studies and a Basler Fasnacht insider, she defines ritual-satirical happenings as lively forms that enable people to transform their anger and frustration in a creative way. The third study written by Alena Rybníčková treats the theatrical aspects of happenings in a rather practical reflection of the creative ways of civic engagement. In her essay “Not to have it dingy” (Aby to nebylo ušmudlané), the author, herself a political watchdog and activist, describes the methods of political happenings by naming and acknowledging the organizational mistakes. All three authors, students of the Department of Authorial Creativity and Pedagogy (KATaP), have discussed their topics with three of their professors — Přemysl Rut, Ivan Vyskočil and Jana Pilátová (who was the supervisor of the whole project and wrote the foreword to this book). The student-professor interviews are also included to widen the range of viewpoints. The practical part of the book offers a “card-index file” of 10+1 happenings including analyses and is crowned by a presentation of the Velvet Carnival ritual happening (Sametové posvícení) which was created by the authors as an attempt to establish a cultivated tradition of celebrating the 17th November public holiday (dedicated to Freedom and Democracy). 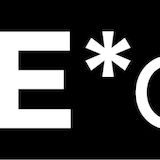