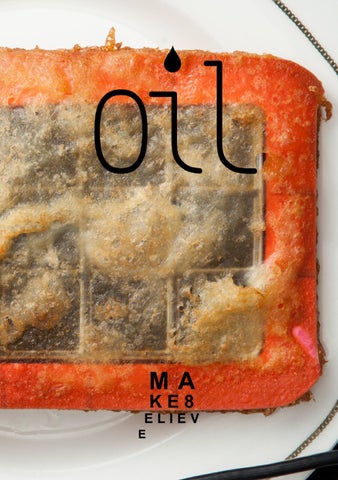 he modern Little Red Riding Hood, reared on singing commercials, has no objection to being eaten by the wolf. Marshall McLuhan

No Fracking Toxic circles, undrinkable water issuing forth from blackened vessels, do not approach or touch. X marks the spot for contamination, X for forever gone, X for what we have allowed to happen. No Fracking is a visual statement warning of the potential and irrevocable contamination of our water supply by the toxic effects of the horizontal fracturing of the United Statesâ&#x20AC;&#x2122; shale formations. Over 750 toxic chemicals are used to extract natural gas from the shale. This industry is highly unregulated.

Hydraulic fracturing is a means of tapping shale deposits containing natural gas that were previously inaccessible by conventional drilling. A well is drilled under high pressure to create fractures in the gas-bearing rocks. The pressure fractures the shale, and the propping materials - primarily sand - holds the fractures open enabling much more natural gas is able to flow freely into the well then would naturally happen. The gas comes up wet in this toxic wastewater and then has to be separated from it on the surface.

Each frack in a well requires more than one million gallons of water. Although gas companies report that fracking fluid is 99% water, the remaining 1% drilled into each well equates to a mixture of 300 tons of approximately 750 chemicals. Many of these chemicals are trade secret “proprietary” chemicals such as benzene, methanol, ethyl benzene and xylene, and include metals such as barium, strontium and lead. According to experts 93 % of these chemicals have adverse health effects, 60% are known carcinogens. Only 30-50 percent of this wastewater is typically recovered from a well, it remains in the ground and is not biodegradable.

To date the oil/gas industry has been secretive about what chemicals are used and have lobbied Congress for a variety of protections. In 2005 the Bush/Cheney Energy Bill exempted natural gas drilling from the Safe Water Drinking Act. It also exempted companies from disclosing the chemicals used during hydraulic fracturing. The FRAC Act (Fracturing Responsibility and Awareness to Chemical Act is a House Bill intended to repeal this so-called “Halliburton Loophole” and to require the natural gas industry to disclose the chemicals they use. Advanced tests such as putting tracer chemicals down a well to see if they reappear in drinking water could ultimately prove whether fracking is safe or not. Some regulators are not waiting for better science, they are moving forward allowing fracking on an even wider scale. 20,000 gas wells are planned to be drilled into the Delaware River Basin to tap the gas resources of the Marcellus Shale, a black shale formation extending deep underground from Ohio and West Virginia northeast into Pennsylvania and southern New York. Elizabeth Miller McCue

e primarily buy commodities neither on account of their utility nor as status symbols; we buy them to get the experience provided by them, we consume them in order to render our lives pleasurable and meaningful. Slavoj Ĺ˝iĹžek First As Tragedy, Then As Farce Verso editions 2009

The miserable thing The piece is composed with layers, which sometimes contrasts and/or strengthens the body/physicality of the performance. At one important layer, the sound of the piece dialogues with physicality of the bodies creating suggestions and exposing materiality for the audience to enter in the universe created by the piece. The way it relates to the audience, proposing a breakthrough a logic of senses and not it intentions to simply entertain or reproducing conventional relation for the body/mind, is what gives the political side of this piece. A critical collage is being used with songs as material in the piece. The song from the grandiloquent opera Carmina Burana «O fortune», meditation instructions for achieving richness or even becoming a millionaire, a disco song «What a wonderful world» asking for hope and togetherness, pop and mass multicultural songs made for the radio. The collage relates and refers with the physicality of the piece. The two bodies does not touch. When the encounter happens it is dry, mechanical, full of tension and force.

The physicality breaks with the naturalist action. Movement is taken in extremes. Or its very minimal or strongly big and intense. Middle tones are out and transitions are not necessary. In this mode, paradox and contractions can bring the complexity for the piece.

The movement is explored giving artificiality and plays with time where the imagination towards these bodies can be accessed. The waving movement used in the choreography brings the machinic notion to the body, and opens up space and possibilities for the audience.The movement plays with paranoid alertness, alienation, violence and power.

The dance considers the social body, how our body is explored and fetishised by society. And yet considers and want to celebrate, the avoided and non-explored, sexual energy as strength to bring awareness and knowledge of otherness.

Investigating, the notion of hallucination the piece brings many elements, which intends to encounter different access to the mind. For example, the piece counts with light, which gives colored shadows to the performer.

Emphasizing the suggestion and invitation to another logic of perception to exposed manipulation of reality. Ritualistic, this colors will lately materialize in liquids coming out of the body. The black shadow comes in the end. It is a huge amount of, not by chance, black oil.

The miserable thing got a award as best direction at ACT Festival in Spain in 2012, it was selected to ITS Festival Choreography Awards and to NEU/NOW Festival in Tallinn in the frame of European Capital of Culture. Antonio Onio & Fernando Belfiore

ull me closer if you think you can hang. Don’t go screaming if I blow you with a bang. There’s steam on the window screen. Live fast, die young. Bad girls do it well. M.I.A. Bad Girls Maya Arulpragasam records, 2012

The story behind SBK...

SBK was born in Finland, March 2012, after some dinners and events happened between artists. SBK is an experimental roaming organization, which uses its car as meetings, creations, working tool. It aims at realizing events where the interaction between an artist or an organization and SBK gives rise to visual art pieces of all kind. Besides, SBK is an allegorical and poetic initiative, whose sphere of operation relies on various images and representations: literature (SBK as a contemporary Don Quixote, Beckett aesthetics, pataphysics, Borges, Pessoa…), geography (Finland as a no man’s land, a world’s end), economy and environment (Shell multinational company, rise of transportation/oil trade/market) popular psychology (a gas station seen as a shared social site). SBK’s identity grows through the process of the closed relationship that it keeps up by generating images on one side and by inviting artists/ non-artists on the other.

SBK arises by the trauma symbolized in car crashes. Thus SBK is never protected from sabotaging itself. SBK would like to be real and make its actions grow, but its economic isolation, as it is unable to adapt to the world/society, don’t allow it to be sure of anything. There shall be a time for solitude, and a time for sharing. SBK cannot survive by itself.

needs solitude. drives away. settles down. hides itself. exhibits itself. is fearless. is scared to death.

This difficulty of adjusting to the contemporary context is also what allows SBK to fit into the economic world by creating its own personal market economy. SBK’s economy shall therefore face «The Man» through playful means and deconstruction. SBK’s title and logo unequivocally refer to Shell multinational company. It is at first a fortuitous occurrence, since the wish was to take into account and symbolically appropriate the real Shell Bar located in Hämeenkyrö, Kyröskoski, South West Finland – as a linguistic ready-made. However, the allusion to Shell remains meaningful and SBK’s political content is obvious. SBK doesn’t get involved in any explicit activism, however it doesn’t happen outside of society. That is why its poetic, metaphorical and artistic ambitions are the medium of its commitment. SBK’s car trips use black gold within total freedom settings. Donation to high-yield, showy and hyperactive society is almost non-existent. This way, SBK attempts to transform the consumed oil into an empty shell. That is of course a pointless undertaking. Therein lies its strength and potential. Hélène Baril SBK scientist director December 8th 2012.

David Herbold - Self Portrait as a Business Tycoon

Olivier Garraud - Have a nice death

In 1991 I made a performance / installation work entitled Harem Pool. It was constructed of hundreds of sand piles, poured individually into a four-meter diameter (approximately) circle. The sand was not fixed in any way, resulting in an intentionally fragile and ephemeral work. A sheet metal pan measuring one meter square by four centimeters high (approximately) occupied the center of the sand circle, and was filled to its brim with discarded motor oil, which imparted a toxic smell and a reflective black surface. During the one-month run of the exhibition, a performer wearing a black nylon garment and a handmade fish skin mask, stood vigil at the exhibitionâ&#x20AC;&#x2122;s opening and for two-hour intervals each week. She held a glass bowl containing water and a square of white silk that had been drenched in the oil, causing it to float on the waterâ&#x20AC;&#x2122;s surface. The work was created in response to the Persian Gulf War (a.k.a. Desert Storm), and in consideration of the tangled inter-relationships between the control and exploitation of land and its resources, particularly oil, and human lives and bodies, particularly those of women. 169

The performer intended an observational position. Her mask indicated her silence, as its material suggested her abject otherness. Yet, in her watchfulness she maintained an awareness of the conditions that affect the land, its resources, and its inhabitants.

At the time of the workâ&#x20AC;&#x2122;s conception, I believed I was offering an empathetic reading of these complexities. In retrospect, several questions have arisen. This is especially so regarding my reference to the harem. Perhaps the work ought to be re-titled? Recent and ongoing changes within Arab societies weigh in. Perhaps the referencing of any custom beyond the realm of oneâ&#x20AC;&#x2122;s own experience it is always assumptive and therefore, flawed?

And yet, like the performer, I have a determined point of view. The harem by any name, that is, any case wherein a person may be denied the freedom of self-determination based upon the perpetuation of culturally and / or politically specific hierarchies is untenable. Equally, the persistent over-development and inequitable distribution of land and natural resources are unsustainable. The suggestion for a title change is not necessarily literal; the work as it was, is open to renaming and / or revisions as the case may be.

More to the point, I re-present it here as point of departure for a discussion regarding the convoluted relationships between war, resources, colonialism, global economies and issues of race, class and gender. These questions persist in their relevancy, as have wars in the Middle East and elsewhere, as has violence against women throughout the world.

lack is modest and arrogant at the same time. Black is lazy and easy - but mysterious. But above all black says this: «I don’t bother you don’t bother me». Yohji Yamamoto

Sorin Oncu - One Day in Oil

Self Portrait as a Business Tycoon

Elizabeth McCue (US PA) No Fracking

Wilson Roscoe (US OH) It’s Getting Hot Out Here

Blackgold: cancer of this planet 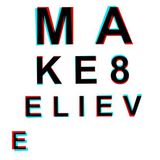 MAKE8ELIEVE is an online magazine, born of a collaboration between two artists, Michelle Marie Murphy (Ohio) and Baptiste Lefebvre (a.k.a. C...

MAKE8ELIEVE is an online magazine, born of a collaboration between two artists, Michelle Marie Murphy (Ohio) and Baptiste Lefebvre (a.k.a. C...