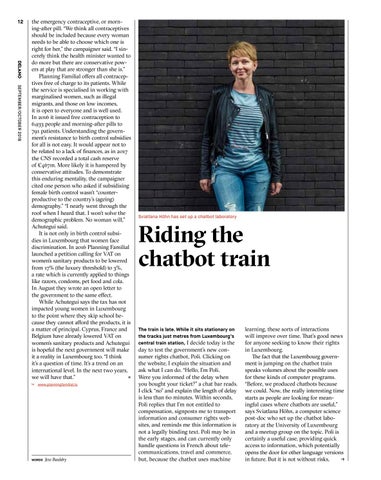 the emergency contraceptive, or morning-after pill. “We think all contraceptives should be included because every woman needs to be able to choose which one is right for her,” the campaigner said. “I sincerely think the health minister wanted to do more but there are conservative powers at play that are stronger than she is.” Planning Familial offers all contraceptives free of charge to its patients. While the service is specialised in working with marginalised women, such as illegal migrants, and those on low incomes, it is open to everyone and is well used. In 2016 it issued free contraception to 6,933 people and morning-after pills to 791 patients. Understanding the government’s resistance to birth control subsidies for all is not easy. It would appear not to be related to a lack of finances, as in 2017 the CNS recorded a total cash reserve of €467m. More likely it is hampered by conservative attitudes. To demonstrate this enduring mentality, the campaigner cited one person who asked if subsidising female birth control wasn’t “counter­ p­roductive to the country’s (ageing) demography.” “I nearly went through the roof when I heard that. I won’t solve the demographic problem. No woman will,” Achutegui said. It is not only in birth control subsidies in Luxembourg that women face discrimination. In 2016 Planning Familial launched a petition calling for VAT on women’s sanitary products to be lowered from 17% (the luxury threshold) to 3%, a rate which is currently applied to things like razors, condoms, pet food and cola. In August they wrote an open letter to the government to the same effect. While Achutegui says the tax has not impacted young women in Luxembourg to the point where they skip school because they cannot afford the products, it is a matter of principal. Cyprus, France and Belgium have already lowered VAT on women’s sanitary products and Achutegui is hopeful the next government will make it a reality in Luxembourg too. “I think it’s a question of time. It’s a trend on an international level. In the next two years, × we will have that.” ↳  www.planningfamilial.lu

Sviatlana Höhn has set up a chatbot laboratory

Riding the chatbot train The train is late. While it sits stationary on the tracks just metres from Luxembourg’s central train station, I decide today is the

day to test the government’s new consumer rights chatbot, Poli. Clicking on the website, I explain the situation and ask what I can do. “Hello, I’m Poli. Were you informed of the delay when you bought your ticket?” a chat bar reads. I click “no” and explain the length of delay is less than 60 minutes. Within seconds, Poli replies that I’m not entitled to compensation, signposts me to transport information and consumer rights websites, and reminds me this information is not a legally binding text. Poli may be in the early stages, and can currently only handle questions in French about telecommunications, travel and commerce, but, because the chatbot uses machine

learning, these sorts of interactions will improve over time. That’s good news for anyone seeking to know their rights in Luxembourg. The fact that the Luxembourg government is jumping on the chatbot train speaks volumes about the possible uses for these kinds of computer programs. “Before, we produced chatbots because we could. Now, the really interesting time starts as people are looking for meaningful cases where chatbots are useful,” says Sviatlana Höhn, a computer science post-doc who set up the chatbot laboratory at the University of Luxembourg and a meetup group on the topic. Poli is certainly a useful case, providing quick access to information, which potentially opens the door for other language versions → in future. But it is not without risks,