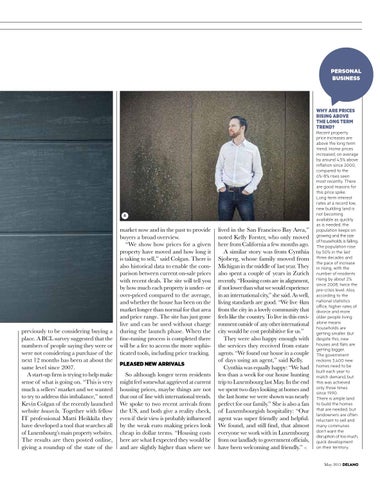 previously to be considering buying a place. A BCL survey suggested that the numbers of people saying they were or were not considering a purchase of the next 12 months has been at about the same level since 2007. A start-up firm is trying to help make sense of what is going on. “This is very much a sellers’ market and we wanted to try to address this imbalance,” noted Kevin Colgan of the recently launched website houser.lu. Together with fellow IT professional Matti Heikkila they have developed a tool that searches all of Luxembourg’s main property websites. The results are then posted online, giving a roundup of the state of the

market now and in the past to provide buyers a broad overview. “We show how prices for a given property have moved and how long it is taking to sell,” said Colgan. There is also historical data to enable the comparison between current on-sale prices with recent deals. The site will tell you by how much each property is under- or over-priced compared to the average, and whether the house has been on the market longer than normal for that area and price range. The site has just gone live and can be used without charge during the launch phase. When the fine-tuning process is completed there will be a fee to access the more sophisticated tools, including price tracking. PLEASED NEW ARRIVALS So although longer term residents might feel somewhat aggrieved at current housing prices, maybe things are not that out of line with international trends. We spoke to two recent arrivals from the US, and both give a reality check, even if their view is probably influenced by the weak euro making prices look cheap in dollar terms. “Housing costs here are what I expected they would be and are slightly higher than where we

lived in the San Francisco Bay Area,” noted Kelly Forster, who only moved here from California a few months ago. A similar story was from Cynthia Sjoberg, whose family moved from Michigan in the middle of last year. They also spent a couple of years in Zurich recently. “Housing costs are in alignment, if not lower than what we would experience in an international city,” she said. As well, living standards are good. “We live 4km from the city in a lovely community that feels like the country. To live in this environment outside of any other international city would be cost prohibitive for us.” They were also happy enough with the services they received from estate agents. “We found our house in a couple of days using an agent,” said Kelly. Cynthia was equally happy: “We had less than a week for our house hunting trip to Luxembourg last May. In the end we spent two days looking at homes and the last home we were shown was nearly perfect for our family.” She is also a fan of Luxembourgish hospitality: “Our agent was super friendly and helpful. We found, and still find, that almost everyone we work with in Luxembourg from our landlady to government officials, have been welcoming and friendly.”

WHY ARE PRICES RISING ABOVE THE LONG TERM TREND? Recent property price increases are above the long term trend. Home prices increased, on average by around 4.5% above inflation since 2000, compared to the 6%-8% rises seen most recently. There are good reasons for this price spike. Long term interest rates at a record low, new building land is not becoming available as quickly as is needed, the population keeps on growing and the size of households is falling. The population rose by 50% in the last three decades and the pace of increase in rising, with the number of residents rising by about 2% since 2008, twice the pre-crisis level. Also, according to the national statistics office, higher rates of divorce and more older people living alone means households are getting smaller. But despite this, new houses and flats are getting bigger. The government reckons 3,400 new homes need to be built each year to match demand, but this was achieved only three times since 1990. There is ample land to build the homes that are needed, but landowners are often reluctant to sell and many communes don’t want the disruption of too much, quick development on their territory. May 2015