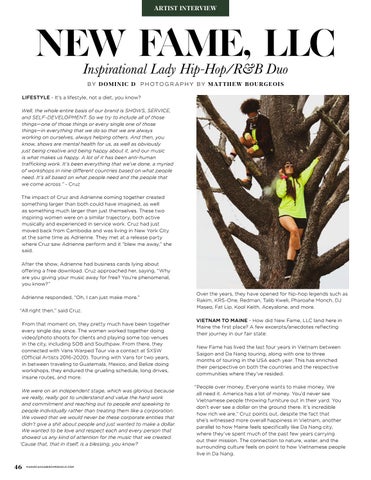 NEW FAME, LLC Inspirational Lady Hip-Hop/R&B Duo B Y D O M I N I C D P H O T O G R A P H Y B Y M AT T H E W B O U R G E O I S LIFESTYLE - It’s a lifestyle, not a diet, you know? Well, the whole entire basis of our brand is SHOWS, SERVICE, and SELF-DEVELOPMENT. So we try to include all of those things—one of those things or every single one of those things—in everything that we do so that we are always working on ourselves, always helping others. And then, you know, shows are mental health for us, as well as obviously just being creative and being happy about it, and our music is what makes us happy. A lot of it has been anti-human trafficking work. It’s been everything that we’ve done, a myriad of workshops in nine different countries based on what people need. It’s all based on what people need and the people that we come across.” - Cruz The impact of Cruz and Adrienne coming together created something larger than both could have imagined, as well as something much larger than just themselves. These two inspiring women were on a similar trajectory, both active musically and experienced in service work. Cruz had just moved back from Cambodia and was living in New York City at the same time as Adrienne. They met at a release party where Cruz saw Adrienne perform and it “blew me away,” she said. After the show, Adrienne had business cards lying about offering a free download. Cruz approached her, saying, “Why are you giving your music away for free? You’re phenomenal, you know?” Adrienne responded, “Oh, I can just make more.” “All right then,” said Cruz. From that moment on, they pretty much have been together every single day since. The women worked together doing video/photo shoots for clients and playing some top venues in the city, including SOB and Southpaw. From there, they connected with Vans Warped Tour via a contact at SXSW (Official Artists 2016-2020). Touring with Vans for two years, in between traveling to Guatemala, Mexico, and Belize doing workshops, they endured the grueling schedule, long drives, insane routes, and more. We were on an independent stage, which was glorious because we really, really got to understand and value the hard work and commitment and reaching out to people and speaking to people individually rather than treating them like a corporation. We vowed that we would never be these corporate entities that didn’t give a shit about people and just wanted to make a dollar. We wanted to be love and respect each and every person that showed us any kind of attention for the music that we created. ‘Cause that, that in itself, is a blessing, you know?

Over the years, they have opened for hip-hop legends such as Rakim, KRS-One, Redman, Talib Kweli, Pharoahe Monch, DJ Maseo, Fat Lip, Kool Keith, Aceyalone, and more. VIETNAM TO MAINE - How did New Fame, LLC land here in Maine the first place? A few excerpts/anecdotes reflecting their journey in our fair state: New Fame has lived the last four years in Vietnam between Saigon and Da Nang touring, along with one to three months of touring in the USA each year. This has enriched their perspective on both the countries and the respective communities where they’ve resided. “People over money. Everyone wants to make money. We all need it. America has a lot of money. You’d never see Vietnamese people throwing furniture out in their yard. You don’t ever see a dollar on the ground there. It’s incredible how rich we are,” Cruz points out, despite the fact that she’s witnessed more overall happiness in Vietnam, another parallel to how Maine feels specifically like Da Nang city, where they’ve spent much of the past few years carrying out their mission. The connection to nature, water, and the surrounding culture feels on point to how Vietnamese people live in Da Nang. 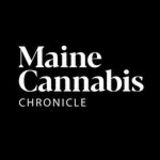