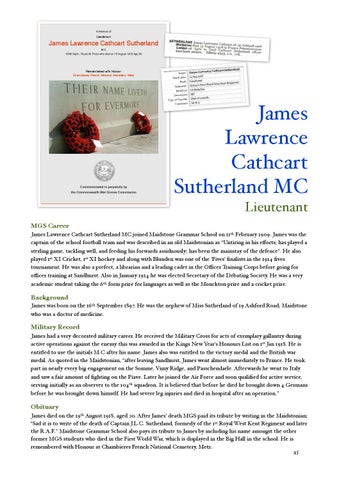 d in the Great Wa

in the Great War,

Lieutenant MGS Career James Lawrence Cathcart Sutherland MC joined Maidstone Grammar School on 11th February 1909. James was the captain of the school football team and was described in an old Maidstonian as “Untiring in his eﬀorts; has played a sterling game, tackling well, and feeding his forwards assiduously; has been the mainstay of the defence”. He also played 1st XI Cricket, 1st XI hockey and along with Blunden was one of the ‘Fives’ finalists in the 1914 fives tournament. He was also a prefect, a librarian and a leading cadet in the Oﬃcer Training Corps before going for oﬃcer training at Sandhurst. Also in January 1914 he was elected Secretary of the Debating Society. He was a very academic student taking the 6th form prize for languages as well as the Monckton prize and a cricket prize.

Background James was born on the 16th September 1897. He was the nephew of Miss Sutherland of 19 Ashford Road, Maidstone who was a doctor of medicine.

Military Record James had a very decorated military career. He received the Military Cross for acts of exemplary gallantry during active operations against the enemy this was awarded in the Kings New Year’s Honours List on 1st Jan 1918. He is entitled to use the initials M.C after his name. James also was entitled to the victory medal and the British war medal. As quoted in the Maidstonian, “after leaving Sandhurst, James went almost immediately to France. He took part in nearly every big engagement on the Somme, Vimy Ridge, and Passchendaele. Afterwards he went to Italy and saw a fair amount of fighting on the Piave. Later he joined the Air Force and soon qualified for active service, serving initially as an observer to the 104th squadron. It is believed that before he died he brought down 4 Germans before he was brought down himself. He had severe leg injuries and died in hospital after an operation.”

Obituary James died on the 19th August 1918, aged 20. After James’ death MGS paid its tribute by writing in the Maidstonian; “Sad it is to write of the death of Captain J.L.C. Sutherland, formerly of the 1st Royal West Kent Regiment and later the R.A.F.” Maidstone Grammar School also pays its tribute to James by including his name amongst the other former MGS students who died in the First World War, which is displayed in the Big Hall in the school. He is remembered with Honour at Chambieres French National Cemetery, Metz. ! 45

2014 Extended Learning Week Project to research all the former Maidstone Grammar School students who died in the First World war. 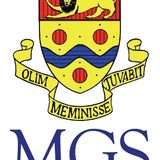