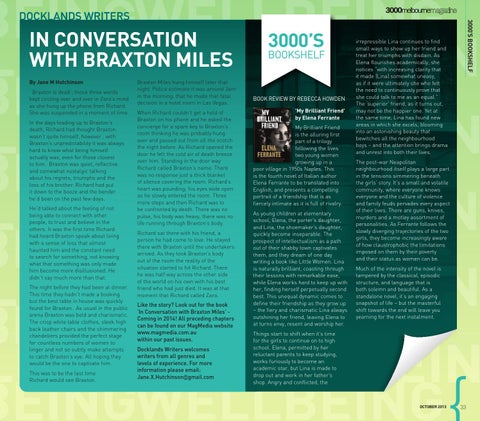 By Jane M Hutchinson ‘Braxton is dead’; those three words kept circling over and over in Zara’s mind as she hung up the phone from Richard. She was suspended in a moment of time. In the days leading up to Braxton’s death, Richard had thought Braxton wasn’t quite himself, however , with Braxton’s unpredictability it was always hard to know what being himself actually was, even for those closest to him. Braxton was quiet, reflective and somewhat nostalgic talking about his regrets, triumphs and the loss of his brother. Richard had put it down to the booze and the bender he’d been on the past few days. He’d talked about the feeling of not being able to connect with other people, to trust and believe in the others. It was the first time Richard had heard Braxton speak about living with a sense of loss that almost haunted him and the constant need to search for something, not knowing what that something was only made him become more disillusioned. He didn’t say much more than that. The night before they had been at dinner. This time they hadn’t made a booking but the best table in house was quickly found for Braxton. As usual in the public arena Braxton was bold and charismatic. The crisp white table clothes, sleek high back leather chairs and the shimmering chandeliers provided the perfect stage for countless numbers of women to linger and not so subtly make attempts to catch Braxton’s eye. All hoping they would be the one to captivate him. This was to be the last time Richard would see Braxton.

Braxton Miles hung himself later that night. Police estimate it was around 3am in the morning, that he made that fatal decision in a hotel room in Las Vegas. When Richard couldn’t get a hold of Braxton on his phone and he asked the concierge for a spare key to Braxton’s room thinking he was probably hung over and passed out from all the scotch the night before. As Richard opened the door he felt the cold air of death breeze over him. Standing in the door way Richard called Braxton’s name. There was no response just a thick blanket of silence covering the room. Richard’s heart was pounding; his eyes wide open as he slowly entered the room. Three more steps and then Richard was to be confronted by death. There was no pulse, his body was heavy, there was no life running through Braxton’s body. Richard sat there with his friend, a person he had come to love. He stayed there with Braxton until the undertakers arrived. As they took Braxton’s body out of the room the reality of the situation started to hit Richard. There he was half way across the other side of the world on his own with his best friend who had just died. It was at that moment that Richard called Zara. Like the story? Look out for the book 'In Conversation with Braxton Miles' Coming in 2014! All preceding chapters can be found on our MagMedia website www.magmedia.com.au within our past issues. Docklands Writers welcomes writers from all genres and levels of experience. For more information please email: Jane.X.Hutchinson@gmail.com

Book Review by Rebecca Howden 'My Brilliant Friend' by Elena Ferrante My Brilliant Friend is the alluring first part of a trilogy following the lives two young women growing up in a poor village in 1950s Naples. This is the fourth novel of Italian author Elena Ferrante to be translated into English, and presents a compelling portrait of a friendship that is as fiercely intimate as it is full of rivalry. As young children at elementary school, Elena, the porter’s daughter, and Lina, the shoemaker’s daughter, quickly become inseparable. The prospect of intellectualism as a path out of their shabby town captivates them, and they dream of one day writing a book like Little Women. Lina is naturally brilliant, coasting through their lessons with remarkable ease, while Elena works hard to keep up with her, finding herself perpetually second best. This unequal dynamic comes to define their friendship as they grow up – the fiery and charismatic Lina always outshining her friend, leaving Elena to at turns envy, resent and worship her.

In Conversation with Braxton Miles

irrepressible Lina continues to find small ways to show up her friend and treat her triumphs with disdain. As Elena flourishes academically, she notices “with increasing clarity that it made (Lina) somewhat uneasy, as if it were ultimately she who felt the need to continuously prove that she could talk to me as an equal.” The ‘superior’ friend, as it turns out, may not be the happier one. Yet at the same time, Lina has found new areas in which she excels, blooming into an astonishing beauty that bewitches all the neighbourhood boys – and the attention brings drama and unrest into both their lives. The post-war Neapolitan neighbourhood itself plays a large part in the tensions simmering beneath the girls’ story. It’s a small and volatile community, where everyone knows everyone and the culture of violence and family feuds pervades every aspect of their lives. There are guns, knives, murders and a motley assortment of personalities. As Ferrante follows the slowly diverging trajectories of the two girls, they become increasingly aware of how claustrophobic the limitations imposed on them by their poverty and their status as women can be. Much of the intensity of the novel is tampered by the classical, episodic structure, and language that is both solemn and beautiful. As a standalone novel, it’s an engaging snapshot of life – but the masterful shift towards the end will leave you yearning for the next instalment.

Things start to shift when it’s time for the girls to continue on to high school. Elena, permitted by her reluctant parents to keep studying, works furiously to become an academic star, but Lina is made to drop out and work in her father’s shop. Angry and conflicted, the 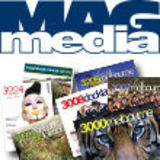 Don’t get ‘Rolled’ over this CROC-tober!

Don’t get ‘Rolled’ over this CROC-tober!