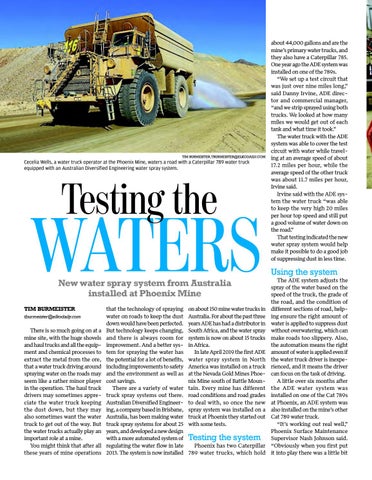 Cecelia Wells, a water truck operator at the Phoenix Mine, waters a road with a Caterpillar 789 water truck equipped with an Australian Diversified Engineering water spray system.

‌There is so much going on at a mine site, with the huge shovels and haul trucks and all the equipment and chemical processes to extract the metal from the ore, that a water truck driving around spraying water on the roads may seem like a rather minor player in the operation. The haul truck drivers may sometimes appreciate the water truck keeping the dust down, but they may also sometimes want the water truck to get out of the way. But the water trucks actually play an important role at a mine. You might think that after all these years of mine operations

that the technology of spraying water on roads to keep the dust down would have been perfected. But technology keeps changing, and there is always room for improvement. And a better system for spraying the water has the potential for a lot of benefits, including improvements to safety and the environment as well as cost savings. There are a variety of water truck spray systems out there. Australian Diversified Engineering, a company based in Brisbane, Australia, has been making water truck spray systems for about 25 years, and developed a new design with a more automated system of regulating the water flow in late 2013. The system is now installed

on about 150 mine water trucks in Australia. For about the past three years ADE has had a distributor in South Africa, and the water spray system is now on about 15 trucks in Africa. In late April 2019 the first ADE water spray system in North America was installed on a truck at the Nevada Gold Mines Phoenix Mine south of Battle Mountain. Every mine has different road conditions and road grades to deal with, so once the new spray system was installed on a truck at Phoenix they started out with some tests.

about 44,000 gallons and are the mine’s primary water trucks, and they also have a Caterpillar 785. One year ago the ADE system was installed on one of the 789s. “We set up a test circuit that was just over nine miles long,” said Danny Irvine, ADE director and commercial manager, “and we strip sprayed using both trucks. We looked at how many miles we would get out of each tank and what time it took.” The water truck with the ADE system was able to cover the test circuit with water while traveling at an average speed of about 17.2 miles per hour, while the average speed of the other truck was about 11.7 miles per hour, Irvine said. Irvine said with the ADE system the water truck “was able to keep the very high 20 miles per hour top speed and still put a good volume of water down on the road.” That testing indicated the new water spray system would help make it possible to do a good job of suppressing dust in less time.

The ADE system adjusts the spray of the water based on the speed of the truck, the grade of the road, and the condition of different sections of road, helping ensure the right amount of water is applied to suppress dust without overwatering, which can make roads too slippery. Also, the automation means the right amount of water is applied even if the water truck driver is inexperienced, and it means the driver can focus on the task of driving. A little over six months after the ADE water system was installed on one of the Cat 789s at Phoenix, an ADE system was also installed on the mine’s other Cat 789 water truck. “It’s working out real well,” Phoenix Surface Maintenance Supervisor Nash Johnson said. “Obviously when you first put it into play there was a little bit Stay on top of the hardrock mining industry in the western US by reading the Mining Quarterly.

Stay on top of the hardrock mining industry in the western US by reading the Mining Quarterly.