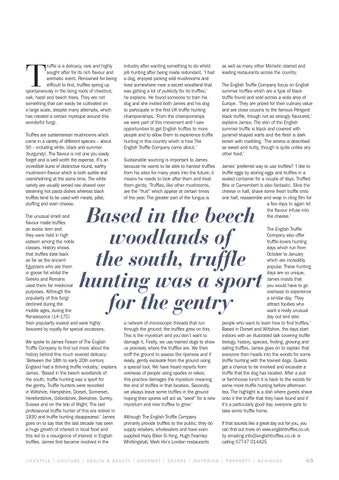 ruffle is a delicacy, rare and highly sought after for its rich flavour and aromatic scent. Renowned for being difficult to find, truffles spring up spontaneously in the living roots of chestnut, oak, hazel and beech trees. They are not something that can easily be cultivated on a large scale, despite many attempts, which has created a certain mystique around this wonderful fungi. Truffles are subterranean mushrooms which come in a variety of different species – about 50 – including white, black and summer (burgundy). The flavour is not one you easily forget and is well worth the expense. It’s an incredible burst of distinctive round, earthy mushroom flavour which is both subtle and overwhelming at the same time. The white variety are usually served raw shaved over steaming hot pasta dishes whereas black truffles tend to be used with meats, pâté, stuffing and even cheese.

industry after wanting something to do whilst job hunting after being made redundant. ‘I had a dog, enjoyed picking wild mushrooms and lived somewhere near a secret woodland that was getting a lot of publicity for its truffles,’ he explains. He found someone to train his dog and she invited both James and his dog to participate in the first UK truffle hunting championships. ‘From the championships we were part of this movement and I saw opportunities to get English truffles to more people and to allow them to experience truffle hunting in this country which is how The English Truffle Company came about.’ Sustainable sourcing is important to James because he wants to be able to harvest truffles from his sites for many years into the future; it means he needs to look after them and treat them gently. ‘Truffles, like other mushrooms, are the “fruit” which appear at certain times of the year. The greater part of the fungus is

as well as many other Michelin starred and leading restaurants across the country.   The English Truffle Company focus on English summer truffles which are a type of black truffle found and sold across a wide area of Europe. ‘They are prized for their culinary value and are close cousins to the famous Périgord black truffle, though not as strongly flavoured,’ explains James. The skin of the English summer truffle is black and covered with pyramid-shaped warts and the flesh is dark brown with marbling. ‘The aroma is described as sweet and nutty, though is quite unlike any other food.’ James’ preferred way to use truffles? ‘I like to truffle eggs by storing eggs and truffles in a sealed container for a couple of days. Truffled Brie or Camembert is also fantastic. Slice the cheese in half, shave some fresh truffle onto one half, reassemble and wrap in cling film for a few days to again let the flavour infuse into the cheese.’

Based in the beech woodlands of the south, truffle hunting was a sport for the gentry

The unusual smell and flavour made truffles an exotic item and they were held in high esteem among the noble classes. History shows that truffles date back as far as the ancient Egyptians who ate them in goose fat whilst the Greeks and Romans used them for medicinal purposes. Although the popularity of this fungi declined during the middle ages, during the Renaissance (14-17C) their popularity soared and were highly favoured by royalty for special occasions.

We spoke to James Feaver of The English Truffle Company to find out more about the history behind this much revered delicacy: ‘Between the 18th to early 20th century England had a thriving truffle industry,’ explains James. ‘Based in the beech woodlands of the south, truffle hunting was a sport for the gentry. Truffle hunters were recorded in Wiltshire, Hampshire, Dorset, Somerset, Herefordshire, Oxfordshire, Berkshire, Surrey, Sussex and on the Isle of Wight. The last professional truffle hunter of this era retired in 1930 and truffle hunting disappeared.’ James goes on to say that the last decade has seen a huge growth of interest in local food and this led to a resurgence of interest in English truffles. James first became involved in the

a network of microscopic threads that run through the ground; the truffles grow on this. This is the mycelium and you don’t want to damage it. Firstly, we use trained dogs to show us precisely where the truffles are. We then sniff the ground to assess the ripeness and if ready, gently excavate from the ground using a special tool. We have heard reports from overseas of people using spades or rakes; this practice damages the mycelium meaning the end of truffles in that location. Secondly, we always leave some truffles in the ground hoping their spores will act as “seed” for a new mycelium and new truffles to grow.’ Although The English Truffle Company primarily provide truffles to the public; they do supply retailers, wholesalers and have even supplied Hairy Biker Si King, Hugh Fearnley Whittingstall, Mark Hix’s London restaurants

The English Truffle Company also offer truffle-lovers hunting days which run from October to January which are incredibly popular. These hunting days are so unique, James insists that you would have to go overseas to experience a similar day. ‘They attract foodies who want a really unusual day out and also people who want to learn how to find truffles.’ Based in Dorset and Wiltshire, the days start indoors with an illustrated talk covering truffle biology, history, species, finding, growing and eating truffles. James goes on to explain that everyone then heads into the woods for some truffle hunting with the trained dogs. Guests get a chance to be involved and excavate a truffle that the dog has located. After a pub or farmhouse lunch it is back to the woods for some more truffle hunting before afternoon tea. The highlight is a dish where guests shave onto it the truffle that they have found and if it’s a particularly good day, everyone gets to take some truffle home. If that sounds like a great day out for you, you can find out more on www.englishtruffles.co.uk, by emailing info@englishtruffles.co.uk or calling 07747 014425