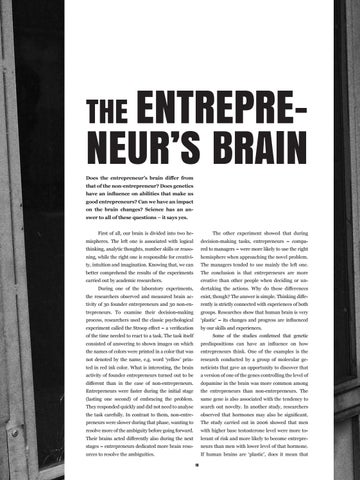 NEUR’S BRAIN Does the entrepreneur’s brain differ from that of the non-entrepreneur? Does genetics have an influence on abilities that make us good entrepreneurs? Can we have an impact on the brain changes? Science has an answer to all of these questions – it says yes. First of all, our brain is divided into two he-

The other experiment showed that during

mispheres. The left one is associated with logical

red to managers – were more likely to use the right

ning, while the right one is responsible for creativi-

hemisphere when approaching the novel problem.

ty, intuition and imagination. Knowing that, we can

The managers tended to use mainly the left one.

better comprehend the results of the experiments

The conclusion is that entrepreneurs are more

carried out by academic researchers.

creative than other people when deciding or un-

During one of the laboratory experiments,

dertaking the actions. Why do these differences

exist, though? The answer is simple. Thinking diffe-

tivity of 30 founder entrepreneurs and 30 non-en-

rently is strictly connected with experiences of both

trepreneurs. To examine their decision-making

‘plastic’ – its changes and progress are influenced

by our skills and experiences.

of the time needed to react to a task. The task itself

Some of the studies confirmed that genetic

consisted of answering to shown images on which

predispositions can have an influence on how

the names of colors were printed in a color that was

entrepreneurs think. One of the examples is the

not denoted by the name, e.g. word ‘yellow’ prin-

research conducted by a group of molecular ge-

ted in red ink color. What is interesting, the brain

neticists that gave an opportunity to discover that

activity of founder entrepreneurs turned out to be

a version of one of the genes controlling the level of

different than in the case of non-entrepreneurs.

dopamine in the brain was more common among

Entrepreneurs were faster during the initial stage

(lasting one second) of embracing the problem.

same gene is also associated with the tendency to

They responded quickly and did not need to analyse

search out novelty. In another study, researchers

the task carefully. In contrast to them, non-entre-

observed that hormones may also be significant.

preneurs were slower during that phase, wanting to

The study carried out in 2006 showed that men

resolve more of the ambiguity before going forward.

with higher base testosterone level were more to-

Their brains acted differently also during the next

lerant of risk and more likely to become entrepre-

neurs than men with lower level of that hormone.

urces to resolve the ambiguities.

If human brains are ‘plastic’, does it mean that 18