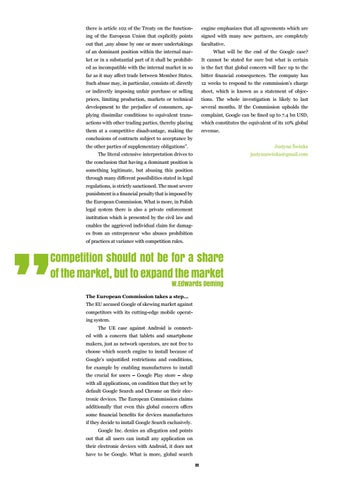 there is article 102 of the Treaty on the function-

engine emphasizes that all agreements which are

ing of the European Union that explicitly points

signed with many new partners, are completely

out that „any abuse by one or more undertakings

of an dominant position within the internal mar-

What will be the end of the Google case?

ket or in a substantial part of it shall be prohibit-

It cannot be stated for sure but what is certain

ed as incompatible with the internal market in so

is the fact that global concern will face up to the

far as it may affect trade between Member States.

bitter financial consequences. The company has

Such abuse may, in particular, consists of: directly

12 weeks to respond to the commission’s charge

sheet, which is known as a statement of objec-

tions. The whole investigation is likely to last

development to the prejudice of consumers, ap-

several months. If the Commission upholds the

complaint, Google can be fined up to 7.4 bn USD,

which constitutes the equivalent of its 10% global

them at a competitive disadvantage, making the

conclusions of contracts subject to acceptance by the other parties of supplementary obligations”.

The literal extensive interpretation drives to

the conclusion that having a dominant position is

something legitimate, but abusing this position through many different possibilities stated in legal regulations, is strictly sanctioned. The most severe punishment is a financial penalty that is imposed by the European Commission. What is more, in Polish legal system there is also a private enforcement institution which is presented by the civil law and enables the aggrieved individual claim for damages from an entrepreneur who abuses prohibition of practices at variance with competition rules.

Competition should not be for a share of the market, but to expand the market

The European Commission takes a step… The EU accused Google of skewing market against competitors with its cutting-edge mobile operating system. The UE case against Android is connected with a concern that tablets and smartphone makers, just as network operators, are not free to choose which search engine to install because of Google’s unjustified restrictions and conditions, for example by enabling manufactures to install the crucial for users – Google Play store – shop with all applications, on condition that they set by default Google Search and Chrome on their electronic devices. The European Commission claims additionally that even this global concern offers some financial benefits for devices manufactures if they decide to install Google Search exclusively. Google Inc. denies an allegation and points out that all users can install any application on their electronic devices with Android, it does not have to be Google. What is more, global search 22