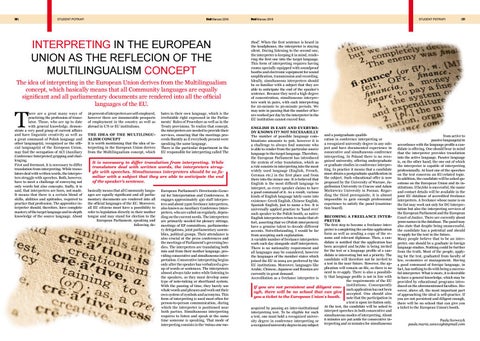 INTERPRETING IN THE EUROPEAN UNION AS THE REFLECION OF THE MULTILINGUALISM CONCEPT The idea of interpreting in the European Union derives from the Multilingualism concept, which basically means that all Community languages are equally significant and all parliamentary documents are rendered into all the official languages of the EU.

here are a great many ways of practicing the profession of translator. Those, who are up to date with general knowledge, demonstrate a very good grasp of current affairs and have linguistic creativity as well as a great command of Polish language and other language(s), recognized as the official language(s) of the European Union, may find the occupation of ACI (Auxiliary Conference Interpreter) gripping and challenging. First and foremost, it is necessary to differ translation from interpreting. While translators deal with written words, the interpreters struggle with speeches. Both, however, have to meet a challenge of conveying not only words but also concepts. Sadly, it is said, that interpreters are born, not made. It means that there is a certain blend of skills, abilities and aptitudes, required to practice that profession. The apprentice interpreter should, therefore, have complete mastery of the target language and in-depth knowledge of the source language. About

26 percent of interpreters are self-employed, however there are innumerable prospects of employment in the country as well as abroad in UN or EU institutions. THE IDEA OF THE MULTILINGUALISM CONCEPT It is worth mentioning that the idea of interpreting in the European Union derives from the Multilingualism concept, which

bates in their own language, which is the irrefutable right expressed in the Parliaments` Rules of Procedure as well as in the Treaty provisions. To realize that concept, the interpreters are needed to provide their services, ensuring that the meetings proceeds fluently as if everybody present were speaking the same language. There is the particular department in the EU responsible for interpreting called The

It is necessary to differ translation from interpreting. While translators deal with written words, the interpreters struggle with speeches. Simultaneous interpreters should be so familiar with a subject that they are able to anticipate the end of the speaker’s sentence. basically means that all Community languages are equally significant and all parliamentary documents are rendered into all the official languages of the EU. Moreover, all EU citizens must have a possibility to refer to legislation directly in their mother tongue and may stand for election to the European Parliament, speaking and following de-

European Parliament’s Directorate-General for Interpretation and Conferences. It engages approximately 430 staff interpreters and about 2500 freelance interpreters, also known as Auxiliary Conference Interpreters, who are called on regularly, depending on the current needs. The interpreters are primarily needed for plenary sittings, meetings of EP committees, parliamentary delegations, joint parliamentary assemblies, political groups. Their attendance is also crucial at the press conferences and the meetings of Parliament’s governing bodies. The interpreters are translating both into and from their mother language, providing consecutive and simultaneous interpretation. Consecutive interpreting begins only after the speaker has verbalized a group of words or sentences. The interpreters almost always take notes while listening to the speakers, so they must develop some type of note-taking or shorthand system. With the passing of time, they barely use whole words and phrases and work out their own system of symbols and acronyms. This form of interpreting is used most often for person-to-person communication, during which the interpreter is positioned near both parties. Simultaneous interpreting requires to listen and speak at the same time someone is speaking. That mode of interpreting consists in the ‘minus one me-

thod’. When the first sentence is heard in the headphones, the interpreter is staying silent. During listening to the second one, the interpreter is keeping it in mind, rendering the first one into the target language. This form of interpreting requires having rooms specially equipped with soundproof booths and electronic equipment for sound amplification, transmission and recording. Ideally, simultaneous interpreters should be so familiar with a subject that they are able to anticipate the end of the speaker’s sentence. Because they need a high degree of concentration, simultaneous interpreters work in pairs, with each interpreting for 20-minute to 30-minute periods. We may note in passing that the number of hours worked per day by the interpreter in the EU institution cannot exceed four. ENGLISH IS EASY AND EVERYBODY KNOWS IT? NOT NECESARILLY The number of possible language combinations amounts to 506, however it is a challenge to always find someone who is able to render from the particular source language to the target language. Therefore, the European Parliament has introduced the system of relay translation, which as a rule consists in interpreting into the most widely used language (English, French, German etc.) in the first place and from there into the minor one. It is believed that English is the most difficult language to interpret, as every speaker claims to have a good command of it. As a result, various kinds of English language lately came into existence: Greek English, Chinese English, Spanish English, just to name a few. It is universally applied practice to ‘hand over’ such speaker to the Polish booth, as native English interpreters refuse to make that effort, asserting that we (Polish interpreters) have a genuine talent to decode different accents. Notwithstanding, I would be far from accepting such explanation. A variable number of freelance interpreters work each day alongside staff interpreters. There is no nationality requirement and all languages may be considered, however the languages of the member states which joined the EU in 2004 are preferred by the EU institutions. Moreover, languages like Arabic, Chinese, Japanese and Russian are currently in great demand. Accreditation as a freelance interpreter is

and a postgraduate qualification in conference interpreting or a recognized university degree in any subject and have documented experience in consecutive and simultaneous conference interpreting. In Poland there is no recognized university, offering undergraduate or graduate studies in conference interpreting. In practice it means that a candidate must obtain a postgraduate qualification in the subject. Such educational offer is now proposed by the University of Warsaw, Jagiellonian University in Cracow and Adam Mickiewicz University in Poznan. Regarding the third prerequisite, it is almost impossible to gain enough professional experience to satisfy the panel (examination board).

BECOMING A FREELANCE INTERPRETER The first step to become a freelance interpreter is completing the on-line application form as well as sending a copy of the resume and relevant diplomas. Then, a candidate is notified that the application has been accepted and he/she is being invited for the test or a language profile of a candidate is interesting but not a priority. The candidate will therefore not be invited to a test in the near future. However, the application will remain on file, so there is no need to re-apply. There is also a possibility that language profile is not in line with the requirements of the EU institutions. Consequently If you are not persistent and diligent eno- such application has not been ugh, there will be no school that can give accepted. One should also you a ticket to the European Union`s booth. note that the participation in a test is upon invitation only. At the test, the candidate will be asked to acquired by passing an inter-institutional interpret speeches in both consecutive and interpreting test. To be eligible for such simultaneous modes of interpreting. About a test, one must hold a recognized univer6 minutes are put aside for consecutive insity degree in conference interpreting or terpreting and 10 minutes for simultaneous a recognized university degree in any subject

from active to passive language(s) in accordance with the language profile a candidate is offering. One should bear in mind that the interpreter provides translation into the active language. Passive language is, on the other hand, the one out of which the interpreter is capable of interpreting professionally. At least one of the speeches on the test concerns an EU-related topic. In addition, the candidate will be asked questions on the European Union and its institutions. If he/she is successful, the name and contact details will be available in the joint EU database of accredited freelance interpreters. A freelance whose name is on the list may work not only for DG Interpretation but also the interpreting services of the European Parliament and the European Court of Justice. There are currently about 3000 names in the database. The panel may also state that despite being unsuccessful, the candidate has a potential and should re-apply for the test in the future. Many people believe that to be an interpreter, one should be a graduate in foreign language studies. Nothing could be further from the truth. Most of the people, applying for the test, graduated from faculty of law, economics or management. Having a good command of foreign language, in fact, has nothing to do with being a successful interpreter. What is more, it is desirable to have a general knowledge, which may be provided by educational programs introduced on the aforementioned faculties. However, above all, the most important part of approaching the ideal is self-practice. If you are not persistent and diligent enough, there will be no school that can give you a ticket to the European Union’s booth. Paula Szewczyk paula.maria.szewczyk@gmail.com