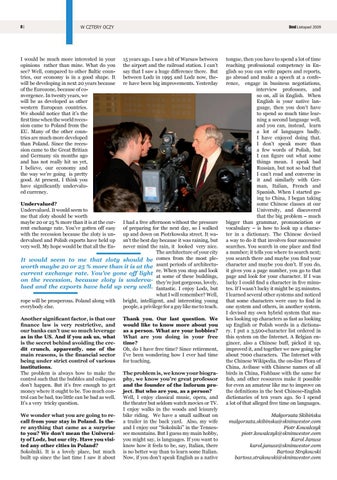 I would be much more interested in your opinions rather than mine. What do you see? Well, compared to other Baltic countries, our economy is in a good shape. It will be developing in next 20 years because of the Eurozone, because of convergence. In twenty years, we will be as developed as other western European countries. We should notice that it’s the first time when the world recession came to Poland from the EU. Many of the other countries are much more developed than Poland. Since the recession came to the Great Britian and Germany six months ago and has not really hit us yet, I believe, our economy and the way we’re going is pretty good. At present, I think you have significantly undervalued currency. Undervalued? Undervalued. It would seem to me that zloty should be worth maybe 20 or 25 % more than it is at the current exchange rate. You’ve gotten off easy with the recession because the zloty is undervalued and Polish exports have held up very well. My hope would be that all the Eu-

rope will be prosperous. Poland along with everybody else. Another significant factor, is that our finance law is very restrictive, and our banks can’t use so much leverage as in the US. And if you ask us, what is the secret behind avoiding the credit crunch, apparently, one of the main reasons, is the financial sector being under strict control of various institutions. The problem is always how to make the control such that the bubbles and collapses don’t happen. But it’s free enough to get money where it ought to be. Too much control can be bad, too little can be bad as well. It’s a very tricky question. We wonder what you are going to recall from your stay in Poland. Is there anything that came as a surprise to you? We don’t mean the University of Lodz, but our city. Have you visited any other cities in Poland? Sokolniki. It is a lovely place, but much built up since the last time I saw it about

15 years ago. I saw a bit of Warsaw between the airport and the railroad station. I can’t say that I saw a huge difference there. But between Lodz in 1995 and Lodz now, there have been big improvements. Yesterday

I had a free afternoon without the pressure of preparing for the next day, so I walked up and down on Piotrkowska street. It wasn’t the best day because it was raining, but never mind the rain, it looked very nice. The architecture of your city comes from the most pleasant periods of architecture. When you stop and look at some of these buildings, they’re just gorgeous, lovely, fantastic. I enjoy Lodz, but what I will remember? Well, bright, intelligent, and interesting young people, a privilege for a guy like me to teach. Thank you. Our last question. We would like to know more about you as a person. What are your hobbies? What are you doing in your free time? Oh, do I have free time? Since retirement, I’ve been wondering how I ever had time for teaching. The problem is, we know your biography, we know you’re great professor and the founder of the Inforum project. But who are you, as a person? Well, I enjoy classical music, opera, and the theater but seldom watch movies or TV. I enjoy walks in the woods and leisurely bike riding. We have a small sailboat on a trailer in the back yard. Also, my wife and I enjoy our “Sokolniki” in the Tennessee mountains. But I guess my main hobby, you might say, is languages. If you want to know how it feels to be, say, Italian, there is no better way than to learn some Italian. Now, if you don’t speak English as a native

tongue, then you have to spend a lot of time reaching professional competency in English so you can write papers and reports, go abroad and make a speech at a conference, engage in business negotiations, interview professors, and so on, all in English. When English is your native language, then you don’t have to spend so much time learning a second language well, and you can, instead, learn a lot of languages badly. I have enjoyed doing that. I don’t speak more than a few words of Polish, but I can figure out what some things mean. I speak bad Russian, but not so bad that I can’t read and converse in it and similarly with German, Italian, French and Spanish. When I started going to China, I began taking some Chinese classes at our University, and discovered that the big problem – much bigger than grammar, pronunciation or vocabulary – is how to look up a character in a dictionary. The Chinese devised a way to do it that involves four successive searches. You search in one place and find a number; it tells you where to search next; you search there and maybe you find your character and maybe you don’t. If you do, it gives you a page number, you go to that page and look for your character. If I was lucky I could find a character in five minutes. If I wasn’t lucky it might be 25 minutes. I learned several other systems and noticed that some characters were easy to find in one system and others, in another system. I devised my own hybrid system that makes looking up characters as fast as looking up English or Polish words in a dictionary. I put a 3,500-character list ordered in this system on the Internet. A Belgian engineer, also a Chinese buff, picked it up, improved it, and together we now going for about 7000 characters. The Internet with the Chinese Wikipedia, the on-line Flora of China, Avibase with Chinese names of all birds in China, Fishbase with the same for fish, and other resources make it possible for even an amateur like me to improve on the definitions in the best Chinese-English dictionaries of ten years ago. So I spend a lot of that alleged free time on languages. Małgorzata Skibińska malgorzata.skibinska@skninwestor.com Piotr Kowalczyk piotr.kowalczyk@skninwestor.com Karol Janusz karol.janusz@skninwestor.com Bartosz Strąkowski bartosz.strakowski@skninwestor.com