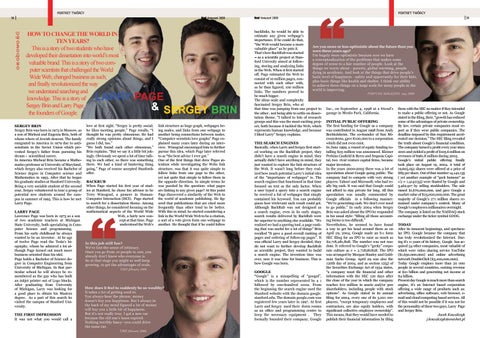 SERGEY BRIN Sergey Brin was born in 1973 in Moscow, as a son of Micheal and Eugenia Brin, both of whom where of Jewish descent. The family emigrated to America in 1979 due to antisemitism in the Soviet Union which prevented Sergey’s father from pursuing his dream - scientifical career. In America Micheal Brin became a Mathematics professor at University of Maryland, which Sergey also received his Bachelor of Science degree in Computer science and Mathematics in 1993. After that he began his graduate studies at Stanford University. Being a very sociable student of the second year, Sergey volunteered to tour a group of potential new students around the campus in summer of 1995. This is how he met Larry Page. LARRY PAGE Lawrence Page was born in 1973 as a son of two academic teachers at Michigan State University, both specializing in Computer Science and programming. From his early childhood he always wanted to be an inventor. At he age of twelve Page read the Tesla’s biography, whom he admired a lot although Page turned out much more business oriented than his idol. Page holds a Bachelor of Science degree in Computer Engineering from University of Michigan. In that particular school he will always be remembered as the guy who has built an inkjet printer out of Lego blocks. After graduating from University of Michigan, Larry was looking for a good place to obtain his Masters degree. As a part of this search he visited the campus of Stanford University. THE FIRST IMPRESSION It was not what you would call a

love at first sight. “Sergey is pretty social; he likes meeting people,” Page recalls, “I thought he was pretty obnoxious. He had really strong opinions about things, and I guess I did, too.” “We both found each other obnoxious,” Brin explains. “But we say it a little bit jokingly. Obviously we spent a lot of time talking to each other, so there was something there. We had a kind of bantering thing going.” Page of course accepted Stanfords offer. BACKRUB When Page started his first year of studies at Stanford, he chose his advisor to be Terry Winograd, a pioneer in HumanComputer Interaction (HCI). Page started to search for a dissertation theme. Among other things, he considered focusing on the mathematical aspects of the World Wide Web, a fairly new concept at that time. Page understood the Web’s

link structure as huge graph, webpages being nodes, and links from one webpage to another being connections between nodes. “Computer scientists love graphs” Page explained many years later during an interview. Winograd encouraged him to further pursue this idea, which Page later referred to as “the best advice I ever got.” One of the first things that drew Pages attention while investigating the Webs link structure, was that it was quite simple to follow links from one page to the other, yet not quite that simple to follow them in the opposite direction. In simple terms he was puzzled by the question: what pages are linking to any given page? At this point Page discovered a similarity of the Web to the world of academic publishing. He figured that publications that are cited more frequently than other tend to be better. With this in mind, he started considering a link in the World Wide Web to be a citation, a sort of a vote given form one webpage to another. He thought that if he could follow

backlinks, he would be able to estimate any given webpage’s importance. If he could do that, “the Web would become a more valuable place” as he puts it. That’s how BackRub was started – as a scientific project at Stanford Univesity aimed at following, storing and analyzing links in the Web. When it first started off, Page estimated the Web to consist of 10 million pages, connected with each other with, as he than figured, 100 million links. The numbers proved to be much bigger. The ideas scale and complexity fascinated Sergey Brin, who at that time was jumping from one project to the other , not being able to settle on dissertation theme. “I talked to lots of research groups and this was the most exciting project, both because it tackled the Web, which represents human knowledge, and because I liked Larry” Sergey explains. THE SEARCH ENGINES Basically, when Larry and Sergey first started working on the BackRub project, they didn’t have a search engine in mind, they actually didn’t have anything in mind, they just wanted to explore the link structure of the Web. It wasn’t long before they realized how much potential Larry’s initial idea of the “importance of webpages” is. The search engines that functioned in that time focused on text as the only factor. When a user typed a query into a search engine he received a list of webpages that simply contained his keyword. You can probably guess how irrelevant such result could get. Although BackRub was not designed as a search engine, even in its early stages, search results delivered by BackRub were far superior to anything else available. “We realized we had a quering tool, a page ranking that was useful for a lot of things” Brin recalled “It gave a good overall ranking of pages and ordering of follow-up pages”. It was official Larry and Sergey decided, they do not want to further develop BackRub as scientific project, they wanted to build a search engine. The invention time was over, now it was time for business. This is how Google was born. GOOGLE “Google” is a misspelling of “googol”, which is the number represented by a 1 followed by one-hundred zeros. From the beginning the search engine used the Stanford website with the domain google. stanford.edu. The domain google.com was registered few years later in 1997. At first Larry and Sergey used their dorm rooms as an office and programming centre to keep the necessary equipment . They formally founded their company, Google

Inc., on September 4, 1998 at a friend’s garage in Menlo Park, California. INITIAL PUBLIC OFFERING The first funding for Google as a company was contributed in August 1998 from Andy Bechtolsheim. The co-founder of Sun Microsystems, gave $100,000 to a corporation which did not even exist. In June 1999, a round of equity funding totalling $25 million was announced. Kleiner Perkins Caufield & Byers and Sequoia Capital, two rival venture capital firms, became major investors. In the years 2000-2003 there was a lot of speculation about Google going public. The company had to compete with very strong players: Yahoo! and Microsoft, who had really big cash. It was said that Google could not afford to stay private for long. All this speculation was usually commented by Google officials in a following manner: “We’re generating cash. We don’t ever need to go public.” In early 2004 when Sergey Brin was asked about the IPO he responded in his usual style: “filling all those accounting forms is too difficult.” Nevertheless, he seemed to have found a way to get his head around them as on April 29, 2004, Google made an S-1 form SEC filing for an IPO to raise as much as $2,718,281,828. The number was not random. It referred to Google’s “geeky” corporate culture as e ≈ 2.718281828. The IPO was arranged by Morgan Stanley and Goldman Sachs Group. April 29 was also the 120th day of 2004, and as section 12(g) of the Securities Exchange Act of 1934 states, “a company must file financial and other information with the SEC 120 days after the close of the year in which the company reaches $10 million in assets and/or 500 shareholders, including people with stock options”. As Google stated in its annual filing for 2004, every one of its 3,021 employees, “except temporary employees and contractors, are also equity holders, with significant collective employee ownership”. This means, that they would have needed to publish their financial information by filing

them with the SEC no matter if they intended to make a public offering or not. As Google stated in the filing, their, “growth has reduced some of the advantages of private ownership. By law, certain private companies must report as if they were public companies. The deadline imposed by this requirement accelerated our decision.” The SEC filing revealed the truth about Google’s financial condition. The company turned a profit every year since 2001 and yielded a profit of $105.6 million on revenues of $961.8 million during 2003. Google’s initial public offering finally took place on August 19, 2004. A total of 19,605,052 shares were offered at a price of $85 per share. Out of that number 14,142,135 ( yet another example of “geek humour” as √2 ≈ 1.4142135) were floated by Google and 5,462,917 by selling stockholders. The sale raised $1,670,000,000, and gave Google a market value of $23,000,000,000. The great majority of Google’s 271 million shares remained under company’s control. Many of Google’s employees millionaires overnight. The company is listed on the NASDAQ stock exchange under the ticker symbol GOOG. TODAY After its innocent beginnings, and spectacular IPO, Google became the company that has truly revolutionized the Internet. During it’s 11 years of its history, Google has acquired 54 other companies, most valuable of which were video sharing service YouTube ($1,650,000,000) and online advertising network DoubleClick ($3,100,000,000). Today Google employs more than 20 000 people in several countries, earning revenue at $21 billion and generating net income at $4 billion. Present day Google is much more than search engine, it’s an Internet based corporation offering a wide range of products such as: advertising, office software, web browser, email and cloud computing based services. All of this would not be possible if it was not for the personality of these two guys, Larry Page and Sergey Brin. Jacek Kowalczyk j.kowalczyk@oneshot.pl