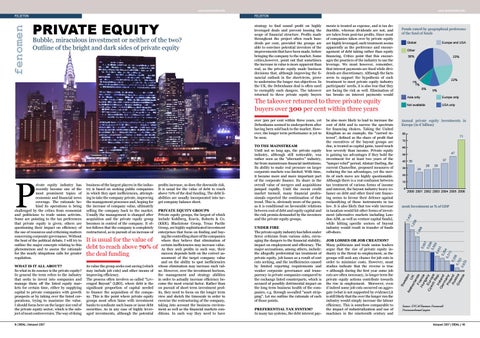 Bubble, miraculous investment or neither of the two? Outline of the bright and dark sides of private equity

strategy to find sound profit on highly leveraged deals and prevent loosing the scope of financial structure. Profits made throughout the project often reach hundreds per cent, provided the groups are able to convince potential investors of the improvements that have been made, before bringing the company to the market. Some critics,however, point out that sometimes the increase in value is more apparent than real, as the private equity made business decisions that, although improving the financial outlook in the short-term, prove to undermine the longer run objectives. In the UK, the Debenhams deal is often used to exemplify such dangers. The takeover returned to three private equity buyers

ments is treated as expense, and is tax deductible, whereas dividends are not, and are taken from post-tax profits. Since most of companies taken over by private equity are highly leveraged, such treatment seems apparently as the preference and encouragement of debt taking rather than equity financing. Critics point that this encourages the practices of the industry to use the leverage. We must however, remember, that interest payments are fixed while dividends are discretionary. Although the facts seem to support the hypothesis of such treatment to meet private equity industry participants’ needs, it is also true that they are facing the risk as well. Elimination of tax breaks on interest payments would

JOB LOSSES OR JOB CREATION? Many politicians and trade union leaders argue that the rise of private equity industry is the threat to employment, as the groups will seek any chance for job cuts in order to minimize costs. However, most studies indicate that the reverse is true – although during the first year some job cuts are often necessary, in longer term the private equity actions contribute towards the rise in employment. Moreover, even if indeed some job cuts occurred on aggregate (what is not supported by evidence),it is still likely that the over the longer run the industry would simply increase the labour efficiency. This is somehow comparable to the impact of industrialization and use of machines in the nineteenth century and

UNDER FIRE The private equity industry has fallen under fierce criticism from various sides, envisaging the dangers to the financial stability, impact on employment and efficiency. The major accusations, among others, include: the allegedly preferential tax treatment of private equity, job losses as a result of cost cuts seeking, and the inefficiencies caused by limited reporting requirements and weaker corporate governance and transparency in private companies compared to the exchange listed counterparts, which is accused of possibly detrimental impact on the long term business health of the companies, e.g. through so-called “asset stripping”. Let me outline the rationale of each of those points.

its value the group seeks cost saving (which may include job cuts) and other means of improving efficiency. The process often involves so called “Leveraged Buyout” (LBO), where debt is the significant proportion of capital needed to finance the acquisition of the company. This is the point where private equity groups most often liaise with investment banks to syndicate such loans or issue debt securities. As in any case of highly leveraged investments, although the potential

PRIVATE EQUITY GROUPS Private equity groups, the largest of which include Kohlberg, Kravis, Roberts & Co. (KKR), Blackstone Group, Texas Pacific Group, are highly sophisticated investment enterprises that focus on finding and buying the controlling share of the companies where they believe that elimination of certain inefficiencies may increase value. As they seek profits in such way, their success depends both on the correct assessment of the target company value and on the ability to spot inefficiencies whose elimination may increase such value. However, over the investment horizon, the management and strategy abilities in order to actually increase efficiency become the most crucial factor. Rather than on pursuit of short term investment profits, they need to focus on the longer term view and sketch the timescale in order to exercise the restructuring of the company, taking into account the business environment as well as the financial markets conditions. In such way they need to have

profits increase, so does the downside risk. It is usual for the value of debt to reach above 70% of the deal funding. The debt liabilities are usually incorporated into target company balance sheet.

WHAT IS IT ALL ABOUT? So what in its essence is the private equity? In general the term refers to the industry that seeks to invest into companies and manage them off the listed equity markets for certain time, either by supplying capital to private companies with growth prospects or by taking over the listed corporations, trying to maximize the value. I should focus here on the larger size end of the private equity sector, which is the subject of most controversies. The way of doing

business of the largest players in the industry is based on seeking public companies in which they spot inefficiencies, attempting to take the company private, improving the management processes and, hoping for the increase of company value, ultimately selling the company back to the market. Usually the management is changed after acquisition and the private equity group becomes in control of the company. It often follows that the company is completely restructured, as in pursuit of an increase of

rivate equity industry has recently become one of the most prominent topics of economic and financial news coverage. The rationale behind its operations is being challenged by the critics from economist and politicians to trade union activists. Some are pointing to the tax preferences that private equity is given; others are questioning their impact on efficiency of the use of resources and criticising matters concerning corporate governance. Without the heat of the political debate, I will try to outline the major concepts relating to this phenomenon and to assess the rationale for the nearly ubiquitous calls for greater regulation.

TO THE MAINSTREAM Until not so long ago, the private equity industry, although still noticeable, was rather seen as the “alternative” industry, far from mainstream financial institutions. Its ability to make real pressure on larger corporate markets was limited. With time, it became more and more important part of the corporate finance. Its share in the overall value of mergers and acquisitions jumped rapidly. Until the recent credit market turmoil, many financial professionals expected the continuation of that trend. This is, obviously more of the guess, as it is conditional on favourable relations between cost of debt and equity capital and the risk premia demanded by the investors and the private equity groups.

be also more likely to lead to increase the cost of debt and to narrow the spectrum for financing choices. Taking the United Kingdom as an example, the “carried interest”, defined as the share of profit that the executives of the buyout groups are due, is treated as capital gains, taxed much less severely than income. Private equity is gaining tax advantages if they hold the investment for at least two years of the “tamper relief” period. Alistair Darling, the current Chancellor, proposed measures of reducing the tax advantages, yet the merits of such move are highly questionable. Although there is a real confusion between tax treatment of various forms of income and interest, the buyout industry heavy reliance on debt and other fixed rate financing seems to favour their defence against reclassifying of those instruments in tax law. It is also likely that too wide increase in taxation would hit other forms of investment (alternative markets including London AIM, as well as venture capital funds), while hitting specific sectors of buyout industry would result in transfer of funds off-shore.