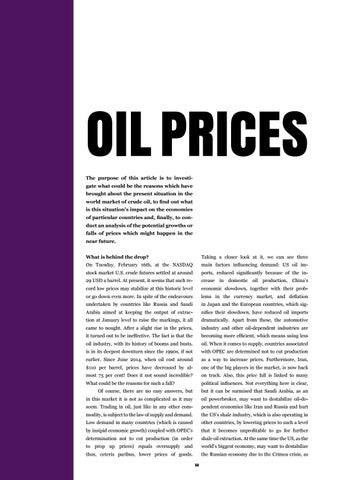 OIL PRICES The purpose of this article is to investigate what could be the reasons which have brought about the present situation in the world market of crude oil, to find out what is this situation’s impact on the economies of particular countries and, finally, to conduct an analysis of the potential growths or falls of prices which might happen in the near future. What is behind the drop?

Taking a closer look at it, we can see three

On Tuesday, February 16th, at the NASDAQ

ports, reduced significantly because of the in-

29 USD a barrel. At present, it seems that such re-

cord low prices may stabilize at this historic level

economic slowdown, together with their prob-

or go down even more. In spite of the endeavours

lems in the currency market, and deflation

in Japan and the European countries, which sig-

Arabia aimed at keeping the output of extrac-

tion at January level to raise the markings, it all

dramatically. Apart from these, the automotive

came to nought. After a slight rise in the prices,

industry and other oil-dependent industries are

it turned out to be ineffective. The fact is that the

oil industry, with its history of booms and busts,

oil. When it comes to supply, countries associated

is in its deepest downturn since the 1990s, if not

with OPEC are determined not to cut production

earlier. Since June 2014, when oil cost around

as a way to increase prices. Furthermore, Iran,

$110 per barrel, prices have decreased by al-

one of the big players in the market, is now back

most 75 per cent! Does it not sound incredible?

on track. Also, this price fall is linked to many

What could be the reasons for such a fall?

political influences. Not everything here is clear,

Of course, there are no easy answers, but

but it can be surmised that Saudi Arabia, as an

in this market it is not as complicated as it may

seem. Trading in oil, just like in any other com-

modity, is subject to the law of supply and demand.

the US’s shale industry, which is also operating in

Low demand in many countries (which is caused

other countries, by lowering prices to such a level

that it becomes unprofitable to go for further

determination not to cut production (in order

shale oil extraction. At the same time the US, as the

to prop up prices) equals oversupply and

the Russian economy due to the Crimea crisis, as 54