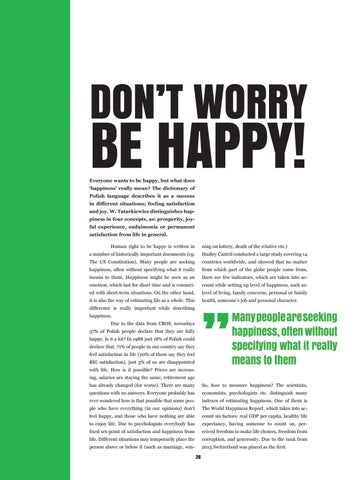 Everyone wants to be happy, but what does ‘happiness’ really mean? The dictionary of

Polish language describes it as a success in different situations; feeling satisfaction and joy. W. Tatarkiewicz distinguishes happiness in four concepts, as: prosperity, joyful experience, eudaimonia or permanent satisfaction from life in general.

Human right to be happy is written in

ning on lottery, death of the relative etc.)

The US Constitution). Many people are seeking

countries worldwide, and showed that no matter

happiness, often without specifying what it really

from which part of the globe people come from,

means to them. Happiness might be seen as an

there are few indicators, which are taken into ac-

emotion, which last for short time and is connect-

count while setting up level of happiness, such as:

ed with short-term situations. On the other hand,

it is also the way of estimating life as a whole. This

Due to the data from CBOS, nowadays

Many people are seeking happiness, often without specifying what it really means to them

ing, salaries are staying the same, retirement age has already changed (for worse). There are many

So, how to measure happiness? The scientists,

questions with no answers. Everyone probably has

ever wondered how is that possible that some peo-

indexes of estimating happiness. One of them is

ple who have everything (in our opinions) don’t

The World Happiness Report, which takes into ac-

feel happy, and those who have nothing are able

to enjoy life. Due to psychologists everybody has

expectancy, having someone to count on, per-

fixed set-point of satisfaction and happiness from

corruption, and generosity. Due to the rank from

person above or below it (such as marriage, win-