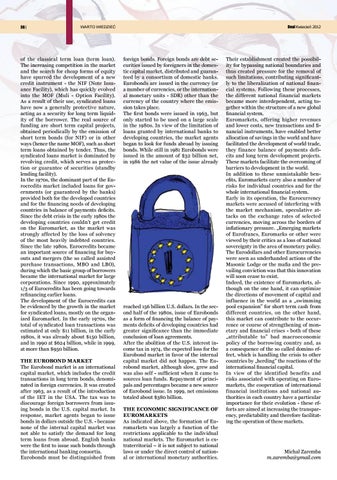 of the classical term loan (term loan). The increasing competition in the market and the search for cheap forms of equity have spurred the development of a new credit instrument - the NIF (Note Issuance Facility), which has quickly evolved into the MOF (Muli - Option Facility). As a result of their use, syndicated loans have now a generally protective nature, acting as a security for long term liquidity of the borrower. The real source of funding are short term capital projects, obtained periodically by the emission of short term bonds (for NIF) or in other ways (hence the name MOF), such as short term loans obtained by tender. Thus, the syndicated loans market is dominated by revolving credit, which serves as protection or guarantee of securities (standby lending facility). In the 1970s, the dominant part of the Eurocredits market included loans for governments (or guaranteed by the banks) provided both for the developed countries and for the financing needs of developing countries in balance of payments deficits. Since the debt crisis in the early 1980s the developing countries couldn’t get credit on the Euromarket, as the market was strongly affected by the loss of solvency of the most heavily indebted countries. Since the late 1980s, Eurocredits became an important source of financing for buyouts and mergers (the so called assisted purchase transactions, MBO and LBO), during which the basic group of borrowers became the international market for large corporations. Since 1990, approximately 1/3 of Eurocredits has been going towards refinancing earlier loans. The development of the Eurocredits can be evidenced by the growth in the market for syndicated loans, mostly on the organized Euromarket. In the early 1970s, the total of syndicated loan transactions was estimated at only $11 billion, in the early 1980s, it was already about $150 billion, and in 1990 at $624 billion, while in 1999, at more than $950 billion. The Eurobond Market The Eurobond market is an international capital market, which includes the credit transactions in long term bonds, denominated in foreign currencies. It was created after 1963, as a result of the introduction of the IET in the USA. The tax was to discourage foreign borrowers from issuing bonds in the U.S. capital market. In response, market agents began to issue bonds in dollars outside the U.S. - because none of the internal capital market was not able to satisfy the demand for long term loans from abroad. English banks were the first to issue such bonds through the international banking consortia. Eurobonds must be distinguished from

foreign bonds. Foreign bonds are debt securities issued by foreigners in the domestic capital market, distributed and guaranteed by a consortium of domestic banks. Eurobonds are issued in the currency (or a number of currencies, or the international monetary units - SDR) other than the currency of the country where the emission takes place. The first bonds were issued in 1963, but only started to be used on a large scale in the 1980s. In view of the limitation of loans granted by international banks to developing countries, the market agents began to look for funds abroad by issuing bonds. While still in 1981 Eurobonds were issued in the amount of $32 billion net, in 1986 the net value of the issue already

reached 156 billion U.S. dollars. In the second half of the 1980s, issue of Eurobonds as a form of financing the balance of payments deficits of developing countries had greater significance than the immediate conclusion of loan agreements. After the abolition of the U.S. interest income tax in 1974, the expected loss for the Eurobond market in favor of the internal capital market did not happen. The Eurobond market, although slow, grew and was also self - sufficient when it came to sources loan funds. Repayment of principals and percentages became a new source of Eurobond issue. In 1999, net emissions totaled about $380 billion. The economic significance of Euromarkets As indicated above, the formation of Euromarkets was largely a function of the restrictions applicable to the individual national markets. The Euromarket is extraterritorial – it is not subject to national laws or under the direct control of national or international monetary authorities.

Their establishment created the possibility for bypassing national boundaries and thus created pressure for the removal of such limitations, contributing significantly to the liberalization of national financial systems. Following these processes, the different national financial markets became more interdependent, acting together within the structure of a new global financial system. Euromarkets, offering higher revenues and lower costs, new transactions and financial instruments, have enabled better allocation of savings in the world and have facilitated the development of world trade, they finance balance of payments deficits and long term development projects. These markets facilitate the overcoming of barriers to development in the world. In addition to these unmistakable benefits, Euromarkets carry also a number of risks for individual countries and for the whole international financial system. Early in its operation, the Eurocurrency markets were accused of interfering with the market mechanism, speculative attacks on the exchange rates of selected currencies, moving across the borders of inflationary pressure. „Emerging markets of Eurofrancs, Euromarks or other were viewed by their critics as a loss of national sovereignty in the area of monetary policy. The Eurodollars and other Eurocurrencies were seen as underhanded actions of the Masonic Lodge or the mafia and the prevailing conviction was that this innovation will soon cease to exist. Indeed, the existence of Euromarkets, although on the one hand, it can optimize the directions of movement of capital and inf luence in the world as a „swimming pool expansion” for short term cash from different countries, on the other hand, this market can contribute to the occurrence or course of strengthening of monetary and financial crises - both of these „attributable to” bad macroeconomic policy of the borrowing country and, as a consequence of the so called domino effect, which is handling the crisis to other countries by „herding” the reactions of the international financial capital. In view of the identified benefits and risks associated with operating on Euromarkets, the cooperation of international financial institutions and national authorities in each country have a particular importance for their evolution - these efforts are aimed at increasing the transparency, predictability and therefore facilitating the operation of these markets.