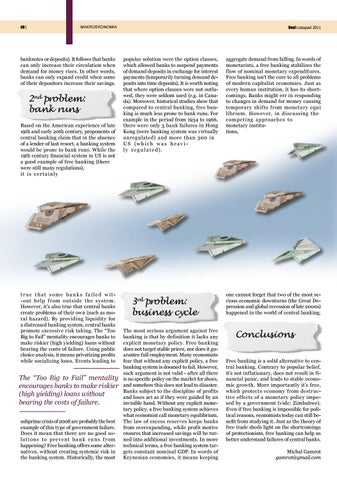 2nd problem: bank runs Based on the American experience of late 19th and early 20th century, proponents of central banking claim that in the absence of a lender of last resort, a banking system would be prone to bank runs. While the 19th century financial system in US is not a good example of free banking (there were still many regulations), it i s c er t a i n ly

The “Too Big to Fail” mentality encourages banks to make riskier (high yielding) loans without bearing the costs of failure. subprime crisis of 2008 are probably the best example of this type of government failure. Does it mean that there are no good solut ion s to pr e ve nt b a n k r u n s f r om happening? Free banking offers some alternatives, without creating systemic risk in the banking system. Historically, the most

popular solution were the option clauses, which allowed banks to suspend payments of demand deposits in exchange for interest payments (temporarily turning demand deposits into time deposits). It is worth noting that where option clauses were not outlawed, they were seldom used (e.g. in Canada). Moreover, historical studies show that compared to central banking, free banking is much less prone to bank runs. For example in the period from 1934 to 1966, there were only 3 bank failures in Hong Kong (were banking system was virtually unregulated) and more than 300 in U S (w h i c h w a s h e a v i ly reg u lated).

The most serious argument against free banking is that by definition it lacks any explicit monetary policy. Free banking does not target stable prices, nor does it guarantee full employment. Many economists fear that without any explicit policy, a free banking system is doomed to fail. However, such argument is not valid - after all there is no specific policy on the market for shoes, and somehow this does not lead to disaster. Banks subject to the discipline of profits and loses act as if they were guided by an invisible hand. Without any explicit monetary policy, a free banking system achieves what economist call monetary equilibrium. The law of excess reserves keeps banks from overexpanding, while profit motive ensures that increased savings will be turned into additional investments. In more technical terms, a free banking system targets constant nominal GDP. In words of Keynesian economics, it means keeping

aggregate demand from falling. In words of monetarists, a free banking stabilizes the flow of nominal monetary expenditures. Free banking isn’t the cure to all problems of modern capitalist economies. Just as every human institution, it has its shortcomings. Banks might err in responding to changes in demand for money causing temporar y shifts from monetar y equi librium. However, in discussing the c ompet ing approache s to monetary institutions,

one cannot forget that two of the most serious economic downturns (the Great Depression and global recession of late 2000s) happened in the world of central banking.

Conclusions Free banking is a solid alternative to central banking. Contrary to popular belief, it’s not inflationary, does not result in financial panic, and leads to stable economic growth. More importantly it’s free, which protects economy from destructive effects of a monetary policy imposed by a government (vide: Zimbabwe). Even if free banking is impossible for political reasons, economists today can still benefit from studying it. Just as the theory of free trade sheds light on the shortcomings of protectionism, free banking can help us better understand failures of central banks. Michał Gamrot gamrot@gmail.com